Dolev Rahat returns with experiences and impressions from the journey of destruction wrought by the Israeli Civil Administration at the Palestinian village of  Bir El Id, located in the South Hebron Hills

By Dolev Rahat | Originally published by Rabbis for Human Rights 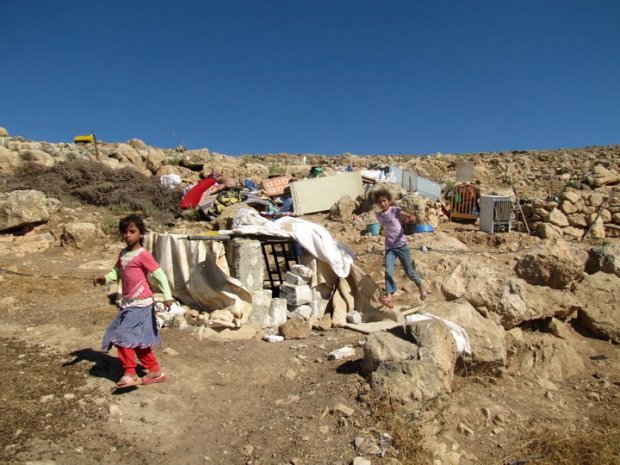 On Monday, June 20th, 2011 the Israeli Civil Administration, accompanied by a private Israeli contracting company, destroyed the village of Chirbat Bir El Id, in the South Hebron Hills. During the course of one morning the forces demolished six residential structures and  tents, and one toilet structure. The forces also uprooted fruit and vegetable patches, and cut the wires of the electrical system that was installed by the Comet-ME organization, which builds wind-turbines and solar panels to provide energy to villages that Israel did not connect to a grid. According to residents, the soldiers told them that they do not deserve to have electricity. In addition, the soldiers also damaged a water tank and sacks of animal food.

Bir El Id is a typical example of the problems of the Palestinian villages in the South Hebron Hills. It is located in Area C, and therefore the responsibility for planning and developing infrastructure lies with the Civil Administration, which is also authorized to issue building permits and to demolish structures that were built without a permit. As with most of the villages in Masaafat Yatta (the rural area surrounding the town of Yatta) in Bir El Id, the master plan in force dates back to the British mandate. This plan, named RJ5, designates the land as agricultural land. That means that the permitted building density falls far short of the residents’ needs. As a result, the residents are forced to build tents, houses and facilities without a permit, which means that the tents, facilities, toilets, water cisterns and roads are constantly exposed to the threat of demolition.

As with most of the other villages in the area, Bir El Id is not connected to water or electricity. As noted, the residents receive a small amount of electricity from a system of solar panels that was installed at the end of 2009 by Comet ME.

Water supply is also a difficult problem. The residents are faced with two problematic alternatives. One is to take water from the cisterns in the area and the second is to bring water from Yatta. The cisterns, which were built centuries ago, accumulate rain water, but it is not clear whether the water is suitable for drinking. Moreover, many of the cisterns are not near the villages, but are scattered all over the area between the villages, sometimes near Jewish settlements. Two of the cisterns used by Bir El Id residents are near the Mitzpe Yair outpost, and Bir El Id residents who come there for water are regularly exposed to settlers’ attacks on them and their equipment.

In 2010 residents of Bir El Id came to the cisterns accompanied by Taayush activists (an Israeli-Palestinian anti-occupation field organization) and tried to pump water. Several times, settlers tried to block their access to the cistern, grab the pump in order to cut off the pipes, and threatened the Palestinians with weapons. The army cooperated with the settlers by declaring the area a “closed military zone,” which prohibits Palestinians from entering, and once the army even using teargas grenades. (For more information about these incidents, see the Taayush website.) In addition, the cisterns are constantly under the threat of being clogged or demolished by the Civil Administration, which has clogged or demolished dozens of cisterns in area C over the past year.

As for bringing water from Yatta – this is expensive  and places a great financial burden on the poor population of Bir El Id and other South Hebron Hills villages. Sometimes an NGO or an aid agency is willing to pay for the transportation of the water, but this cultivates dependence on the organizations for even the most basic needs, such as water. The transportation of water is also very complicated logistically, given the poor roads of the South Hebron Hills.

In 1999, the Israeli army declared a vast area in South Hebron Hills, including Bir El Id, as a firing zone, and the residents of Bir El Id were forced to leave their homes. At the beginning of 2000, a court order allowed the residents to return to their village, but they were forced to leave again because of settler violence. At the end of 2009 several dozens of people returned. However, the army continues to impose difficulties for their living in their village. Initially the army prevented the local Palestinians from using the only road to the village.

The outline of a faded hope

On May 17th this year, Adv. Ghiat Nasser submitted a zoning plan for Bir El Id on behalf of the residents and with the cooperation of Rabbis for Human Rights, a plan that the State itself should have had prepared. At the same time, Adv. Nasser submitted a request to postpone any demolitions in Bir El Id until the plan is reviewed. On May 26th, 2011, the Civil Administration claimed that they had not received the plan. Adv. Nasser sent the plan again. On May 29th, after only three days, and without the presence of the residents or their attorney, the Civil Administration’s planning committee announced the rejection of the plan.

UPDATE: Since this post was written, The Civil Administration demolished more homes in Bir El Id, despite an oral understanding with local residents. You can read about the latest developments and the struggle over the village’s fate on Rabbis for Human Rights‘ site. RHR also started a letters campaign to the Defense Minister (who is in charge of the Civil Administration), asking him to protect the rights of the people of Bir El Id. You can join it on their Facebook page.

Dolev Rahat is an activist working with  the “Taayush” movement and helping the resident of South Hebron Hills.