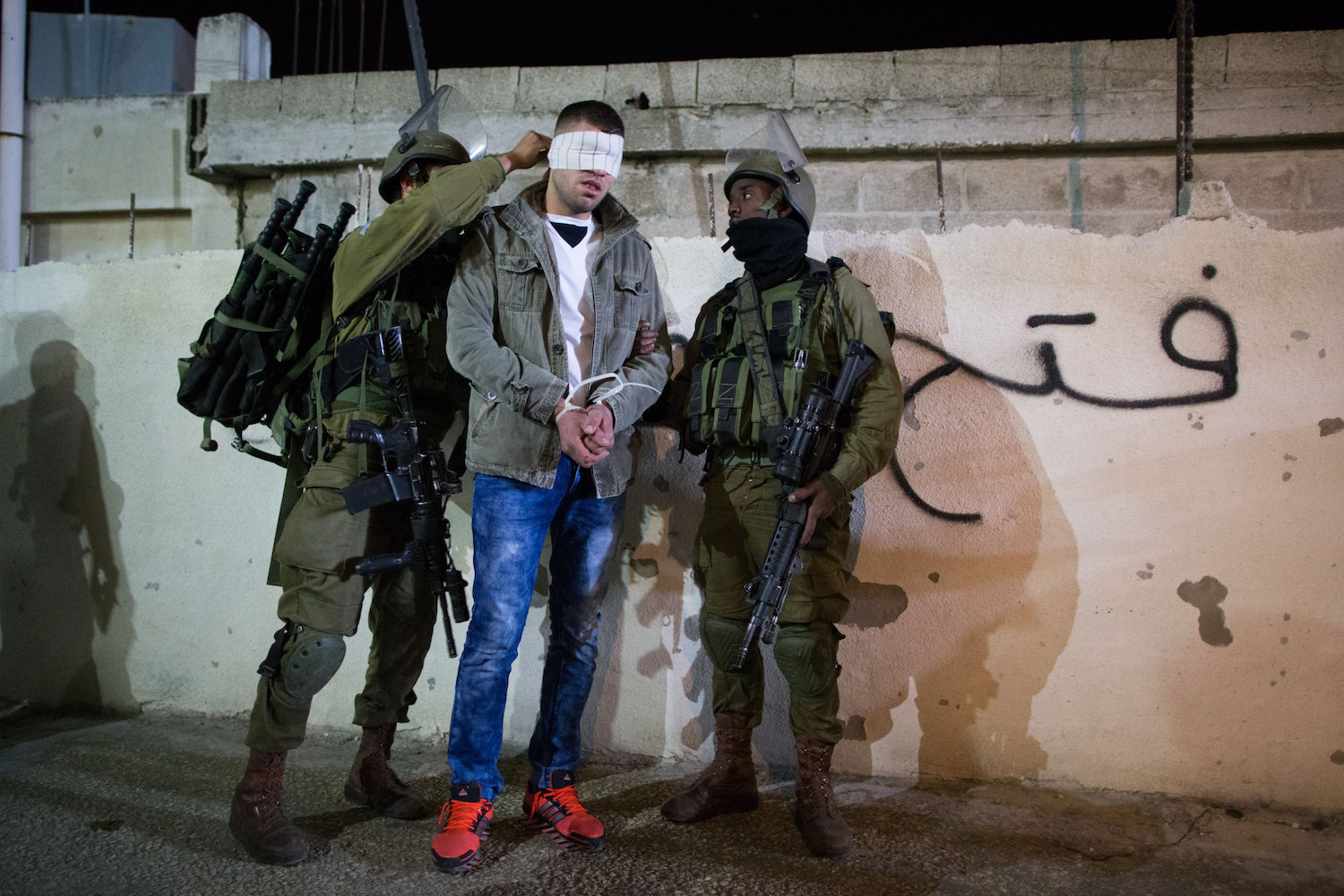 Earlier this month, Mais Abu Ghosh, a student at Birzeit University in the West Bank, sent a letter to her family from Damon Prison in northern Israel. “I love you so much,” Abu Ghosh wrote. “I am fine as long as you and those whom I love are fine […] You are in my mind and my spirit.” She asked her family to send greetings to her university friends and to her professors, “with no exceptions.” She added: “I am with another family now. All difficulties will pass.”

Israeli forces arrested Abu Ghosh in late August. She is one of dozens of Palestinian students who have been detained over the past three months, in a heightened crackdown on students across the occupied West Bank.

According to data collected by Right to Education, a grassroots campaign aimed at defending education in Palestine, Israeli forces have detained at least 64 university students since the start of this year. Eighteen of the detainees are students at Birzeit — the second-largest university in the occupied West Bank.

A spokesperson at Addameer, a Palestinian prisoners’ rights organization, told +972 that Israel has been targeting an increasing number of Palestinian students since the start of 2019. There are currently 260 Palestinian high school and university students in Israeli prisons.

Of the 18 Birzeit students who were arrested in August, Israel has released only three. All of them were taken from their homes during overnight army raids, with Israeli soldiers using “excessive force” in the course of making the arrests, according to Addameer.

Most of the detained Birzeit students are still under interrogation, which could last up to 75 days or be extended to another 90 days. Three of the students have been placed under administrative detention – a policy inherited from the British Mandate, by which Israel holds detainees indefinitely, without charge. It is used almost exclusively against Palestinians.

Addameer has expressed “serious concern for the well-being and health” of the student detainees, noting that many have been prohibited from seeing lawyers and have been subjected to “torture and ill-treatment.”

According to Right to Education, 80 Birzeit students are currently imprisoned by Israel, including 17 who are under administrative detention. Palestinian students raise their diploma during their graduation ceremony at the end of the academic year on May 20, 2016 at Birzeit University in the West Bank town of Birzeit, near Ramallah. Photo by Flash90

Last month, an Israeli military court imposed a gag order on the cases of several Palestinian student detainees who are undergoing interrogations. The gag order is expected to be lifted on Nov. 10.

Addameer said the gag order was a violation of the “basic rights of the prisoner, their family and their lawyer” and an “attempt to cover up grave human rights violations” inflicted on Palestinian prisoners during interrogations.

An Israeli army spokesperson told +972 that the students recently arrested at Birzeit are “suspected of involvement in terror attacks that occurred over the last few months in which Israeli citizens were murdered.” The spokesperson added that they could not provide further information while the cases were being investigated by the Shin Bet — Israel’s internal security agency.

The army spokesperson is most likely referring to an attack that occurred in August, when a 17 year-old Israeli girl named Rina Shnerb was killed by an improvised explosive near Dolev, a settlement located northeast of Ramallah.

Samer Arbeed, 44, has been accused of heading a Popular Front for the Liberation of Palestine (PFLP) cell that allegedly carried out the attack. He was hospitalized in critical condition last month, with broken ribs and kidney failure after torture and severe beatings before and during interrogations carried out by the Shin Bet at the Russian Compound in Jerusalem.

At Hadassah Hospital, Arbeed slipped into a coma and was put on a respirator. Israeli media reported that the Shin Bet had been given legal permission to use “extraordinary measures” during Arbeed’s interrogation.

In a report released last year, Addameer documented Israeli authorities’ systematic use of torture at the Russian Compound, which Palestinians refer to as al-Mascobiyya. Among the types of torture: placing the detainee in solitary confinement and exposing them to sounds of torture from neighboring cells. The cells, according to the report, do not “meet the minimum standards of adequate human living.”

“Palestinian students have faced continuous and systematic attacks” by the Israeli army – particularly at Birzeit, said Yara Hawari, a fellow at the Palestinian think tank Al-Shabaka. A student who is politically active will, she said, “inevitably” have “some kind of encounter with Israeli occupation forces.”

Birzeit has served as a center for Palestinian political, cultural and academic life in the West Bank for decades. Its graduates include prominent Palestinian figures such as Marwan Barghouti, now serving a life sentence in an Israeli jail.

Israeli soldiers patrol Birzeit University, on the outskirts of the city of Ramallah in the West Bank during an operation on June 19, 2014. (Issam Rimawi/Flash90)

Since the 1970s, the university has been subject to numerous Israeli army closures, the longest of which lasted for nearly five years, from 1988-82, during the first Palestinian intifada. Students and teachers resisted the closures, holding classes in their homes or outside the closed gates of the university.

“That legacy means that Birzeit has remained a very politically active space,” Hawari said. “It’s a hub of student organizing.”

According to Tahseen Elayyan, who heads the monitoring and documentation department at the Palestinian human rights NGO al-Haq, Birzeit students represent the entire Palestinian political spectrum – both within and outside the Palestine Liberation Organization (PLO).

The Palestinian Authority has not held a general election since 2005, which means that residents of the West Bank and Gaza have been prevented from expressing their political views through the democratic process. Student elections at Birzeit have served as an important barometer for the political zeitgeist.

“Birzeit represents a vibrant political Palestinian space that represents the society,” Elayyan said. “This is one of the reasons that make the university the subject of frequent Israeli attacks.”

According to Right to Education, Israeli forces have killed 26 Birzeit University students since 1984, while around 1,000 Birzeit students have been arrested since 2004. Almost invariably, the charge is involvement in terror activities.

In March 2018 Omar Kiswani, the head of Birzeit’s student council and a member of the Islamic Bloc on campus, was detained by mista’revim who gained access to the university campus by posing as journalists. The arrest made international news because students recorded videos of the violent incident on their phones, and these were broadcast by various media outlets. Two students and a university employee were wounded by the arresting forces.

Israeli authorities later said Kiswani was arrested over “suspected involvement in terror activity,” most likely owing to the Islamic Bloc’s association with Hamas, which Israel considers a terrorist organization.

Yara Hawari of Al-Shabaka explained that Israel targets politically active students regardless of any specific affiliation. Arrest campaigns usually come in waves, she said. An arrest of one student is followed by arrests of all the students in their network and their political circle. The recent wave seems to be targeting students suspected of affiliation with the left-wing PFLP. Arrests campaigns are an effective technique to break Palestinian youth, she added.

Targeting the agents of change

Palestinian academia suffers greatly from the occupation, said Hawari. Israel has terminated or turned down visas for foreign and Palestinian academics who teach at the universities. None of the international faculty at Birzeit was issued a visa for the 2018-19 academic year; the only exceptions are those who teach or do research under the auspices of programs sponsored by foreign governments.

Israel frequently denies visas to students who wish to study abroad, or attend academic conferences. The intended result of these policies is to isolate Palestinian academia from the outside world.

Nor can Palestinian prisoners complete their education inside Israel’s prisons. Students arrested by Israeli forces typically miss a minimum of one academic semester, while others can wait years in detention. Post-release, trying to pick up where they left off can present immense challenges. Their peers have moved on, or graduated, while they are forced to re-take classes with students who are much younger and who have not had the same life experiences.

The Palestinian Authority uses the same tactic as Israel, arresting politically engaged students to crack down on dissent — especially in cases where it challenges Fatah domination of the political landscape in Palestine. Since the beginning of this academic year the PA arrested 12 students; all of them have since been released. The Voice of Palestinian Students, a student-run Facebook group , has documented five additional arrests by PA forces in October.

Fatah, said al-Haq’s Elayyan, wants “to create an atmosphere in which Fatah always win the elections.”