When I visited a Palestinian refugee camp in the West Bank with a group of activists from working-class Black neighborhoods in the United States, I was astonished to discover just how much it reminded me of home. But then it didn’t. 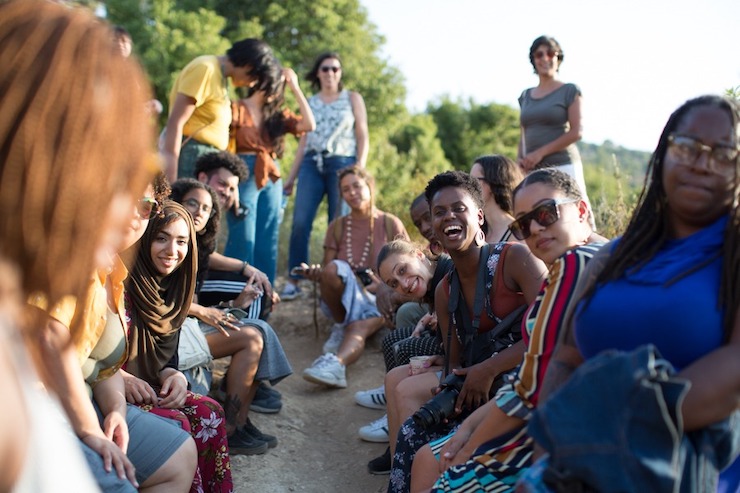 The Dream Defenders on their fourth delegation to Palestine, 2019. (Erik Paul Howard)

Traveling with the Dream Defenders in Palestine is an exercise in conquering distance. In some sense, this is just literal. Many of us, predominantly organizers of color, have traveled from across the United States to join the Florida-based movement for racial and economic justice in its fourth delegation to Palestine, with stops across the occupied West Bank, East Jerusalem, Hebron, and beyond.

This experience also helped narrow what can feel like another insurmountable chasm: the feeling that each of us is marooned on our own island, facing unique challenges that people in other corners of the world can’t fathom. Political activists and organizers face the difficult task of bridging the distance that leaves so many of us feeling isolated, without erasing important differences along the way.

The purpose of the visit was straightforward: to deepen activists’ understanding of Israel’s illegal military occupation, and to strengthen the chains of solidarity linking activists in the United States and Palestine. The latter reflects the old lefty dream of internationalism — the belief that the fates of all the world’s working-class people are tangled up, and thus their struggles for justice should be as well.

Over the last 50 years, a triumphant right wing has taken a sledgehammer to that idea, doing a terrific job of “atomizing us,” says Zaina Alsous, an organizer with Dream Defenders whose own family was expelled from Palestine in 1948. As a result, the most fabulously wealthy and powerful are able to tighten their death grip on the institutions that shape our lives.

The response, Alsous stresses, must include a revival of people seeing “themselves as perpetually tethered to others.” Not as an act of “charity,” but one rooted in “your own liberation.” This isn’t abstract, she tells me: the only way to dethrone the powerful is for everyday people to “credibly and concretely explain that our enemies are the same,” and to take collective action against their shared adversaries in the private and public arenas.

The thrilling thing about a trip like this is that it provides a fortune of small moments, in the form of striking similarities that one can’t unsee, to recognize this intertwining fate.

One Tuesday afternoon near Bethlehem, we find ourselves in the Dheisheh refugee camp. Dheisheh was established in 1949 to serve some of the 750,000 Palestinians ethnically cleansed by the Israeli military during the 1948 war.

Along one of Dheisheh’s many sloping streets, a wall is ornamented with a string of names and faces, old and young alike. Hazem, our guide, explains that each of them was killed by the Israel Defense Forces, a name many Palestinians consider laughably Orwellian based on the organization’s actual record, which includes regularly rampaging through the camp in nighttime raids, toting military-caliber weapons and kicking in the doors of defenseless Palestinians.

The wall is striking not because it feels like something from an unrecognizable world. Just the opposite — it’s the type of crushing display of grief that unfailingly dots the landscape of America’s poor and working-class black communities, which many in our group, myself included, come from. I’m not surprised to find that others are also swept back to similar corners in cities they’ve called home, where the name or face of someone they’ve loved is immortalized across concrete.

“There’s so much resistance art…commemorating people that have passed,” says D’Atra Jackson, who lives and organizes in Durham, North Carolina as the National Co-Director of BYP (Black Youth Project) 100. It reminds Jackson of her hometown, Philadelphia, where she says a mural “was just put up of my best friend. She was killed in 2011…That’s the thing that we do, you know? We build altars. We put candles up. We place flowers.”

What Jackson describes, of seeing her own tragic experience reflected in the lives of other people, is how the path to solidarity — across borders, oceans, and other vast expanses — often begins.

Jackson traces her own awakening to the Palestinian struggle to 2014, when the Movement for Black Lives began drawing connections between “the occupation in Palestine and the war on Black America.” In 2018, Jackson’s BYP100 chapter drew that connection even closer.

Along with a web of other groups organized under the banner “Demilitarize Durham2Palestine Coalition,” they led a “campaign to disrupt the collaboration between our Durham Police Department and the Israeli Defense Forces,” making Durham the first city in the nation to ban police training exchanges with Israel. It was a clear statement of moral and strategic priorities: the forces that often make Palestinian life a dystopian hell of high-tech surveillance, harassment, and violence, and those that regularly devastate Black communities shouldn’t be sharing notes on how to do those things more effectively. 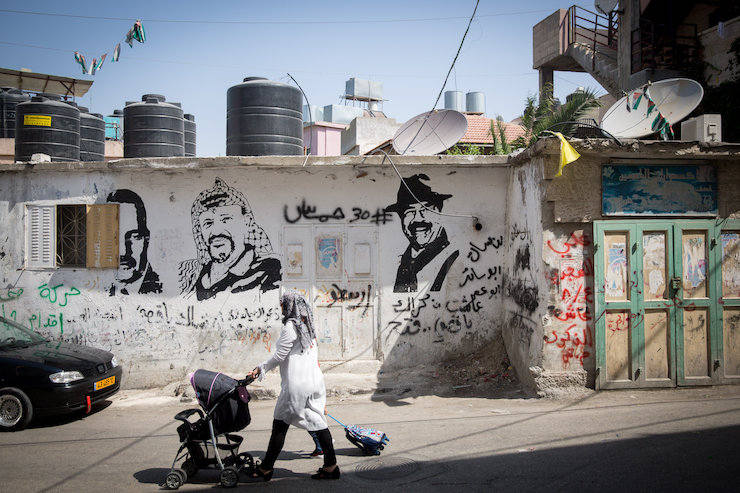 A Palestinian woman walks through the alleyways of Dheisheh refugee camp, in the West Bank city of Bethlehem, August 30, 2018. (Miriam Alster/Flash90)

This reflects a broader drift in popular opinion in favor of the Palestinian struggle for justice. In recent years especially, the international Boycott, Divestment, and Sanctions (BDS) movement, and other fiercely dedicated groups like Jewish Voice for Peace and If Not Now, have raised awareness of Israel’s internationally-recognized crimes against an utterly defenseless Palestinian people.

And, it must be said, some have greater responsibility for unraveling this ugly chapter of history than others. Professor Robin D.G. Kelley puts it well when he explains that “…as a U.S. taxpayer, it’s imperative that I take a critical stance against a U.S. foreign policy that puts the whole world in jeopardy.” This follows another basic moral principle: responsibility for one’s actions. Or in the case of U.S. citizens, actions carried out in our names, like the country’s decisive military, diplomatic, and economic support for Israel’s horrific treatment of Palestinians.

For Amjad Iraqi, an advocacy coordinator with Adalah, the Legal Center for Arab Minority Rights in Israel, the swell of support from Black activists has “rejuvenated” a movement that’s been “brutalized and suppressed” over the years. He credits a growing “understanding that [Black Americans and Palestinians] are not completely different” for this deepened sense of camaraderie.

The similarities can feel staggering.

There are the obvious crimes against human dignity. Palestinians, both within Israel and the occupied territories, face an entire ecosystem of domination. Adalah has cataloged more than 65 laws that “limit the rights of Palestinians in all areas of life.” Inferior schools. Contaminated water. Shredding the right to protest and freedom of expression. Ubiquitous and humiliating restrictions on freedom of movement. Rampant and ruthlessly enforced residential segregation in places like Hebron. A vast and towering apparatus of surveillance, arrest, and detention.

It’s a nightmarish picture eerily similar to the one facing Black Americans. Palestinians have been hit with a social and economic sledgehammer with a simple goal in mind: establishing a majority with special privileges and a powerless minority permanently locked into second-class citizenship.

Connecting the dots in this way has served as the basis for countless instances of struggling people linking arms around the world. Writers, scholars and activists smarter than me have carefully explained that the preventable suffering of Palestinians bears striking resemblance to avoidable misery elsewhere. There are the Indigenous victims of settler-colonial projects in Anglosphere countries like the United States, Canada, and Australia. There is India’s cruel and unfolding occupation of Kashmir. The United States’s vicious treatment of Latinx people at the southern border. 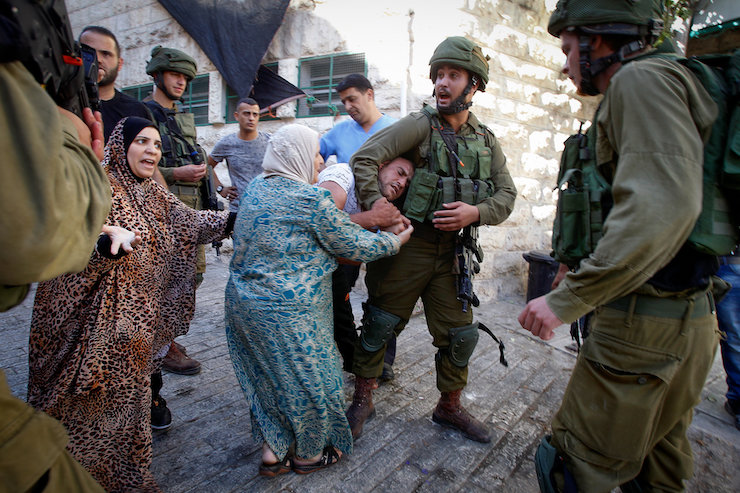 These experiences need not be identical for one to conclude, as so many would at some point on our trip, “Yes, we’ve seen this before.”

But what happens when that’s no longer true? When certain aspects of what others are facing turn out to be unlike anything we’ve ever seen?

Over dinner one evening in Haifa, toward the trip’s closing moments, Marc Lamont Hill, a fierce and unapologetic critic of Israel’s cruel treatment of Palestinians, says that at some point “you realize that [focusing on similarities] is insufficient.”

And indeed, the world. The Palestinians of Gaza, 50 percent of whom are children, live under a merciless siege on all sides, boxed into what David Cameron, the former prime minister of the United Kingdom, called an “open-air prison” — leaving them no way out of a territory UN officials have deemed “unlivable.”

That unlivable territory is one where 97 percent of the water is “unsuitable for human consumption.” One where Israel places trapped Palestinians “on a diet” without letting them “die of hunger” and routinely subjects them to what its officials call “mowing the lawn,” a euphemism for blowing them away by the thousands. 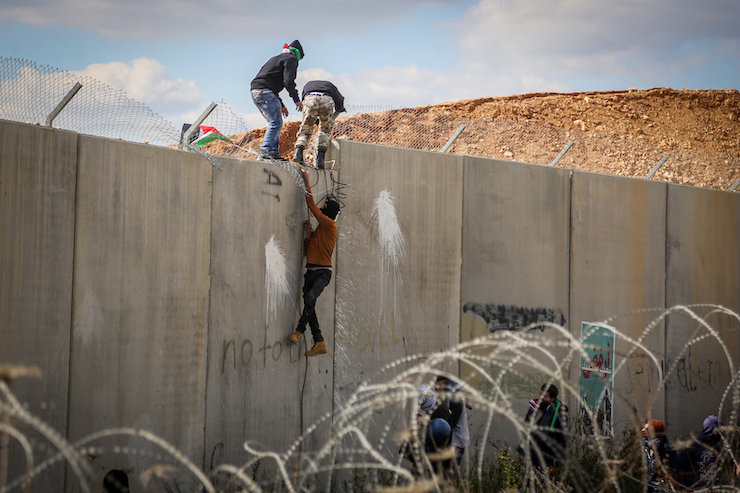 Palestinian protesters climb over the separation barrier in protest of it, in the West Bank village of Bil’in, near Ramallah, Friday, Febraury 17, 2017. (Flash90)

“Sameness,” then, may kick open the door to empathy. But establishing the type of solidarity that can endure and overcome the most entrenched feelings of isolation requires something more.

There’s no magic bullet, but there are clear paths to action. Hill goes on to speak about pushing past the uncertainty that comes when you realize “I don’t know what this is,” to a deeper determination to “have solidarity through difference. I don’t need us to be the same,” says Hill. “I can understand [your experience] on its own terms.”

This reminds me that internationalism, at its best, offers a clear set of guiding moral principles to follow, making it easier to navigate moments of uncertainty. The one that echoes loudest here is the most foundational, the one that binds people everywhere hoping to expand human freedom as far as humanly possible: an unshakable belief in the basic right to determine our own futures.

“This is a kind of joint, collective venture,” Hill says. “We are not advocating on behalf of Palestinians, but partners with Palestinians for the right to self-determination…and recognizing that what’s happening there is not exceptional, but rather part of a larger global process of late colonialism and neoliberalism, and that what happens in Palestine is going to have an impact on the rest of the world.”

For many, this is what Dr. King meant by everyone being “tied in a single garment of destiny,” with “the triple evils of racism, economic exploitation, and militarism” weaving all of our fates together.

Ultimately, Alsous tells me, the Dream Defenders hope to make the colossal stakes of solidarity less gauzy and abstract and more touchable, with visible human consequences: “A frame that we’ve been using is ‘Solidarity is not a luxury.’ It’s actually our only option to create the conditions of a tenable future where our people can live.”

Eli Day is a writer and relentless Detroiter, where he writes about politics, race, and class. His work has appeared in Mother Jones, In These Times magazine, Vox, The Root, Playboy, the Detroit News and the Michigan Chronicle, among others.