Palestinian activists and others have long faced actual travel bans, blacklists, and political persecution. Nevertheless, that some of the same methods are now being used against Israeli and American Jews is a worrying sign. 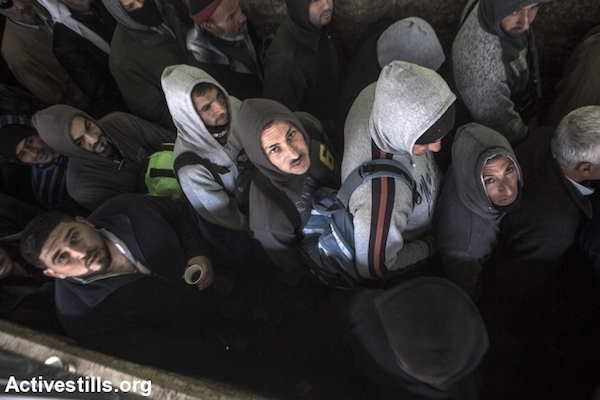 Palestinian men wait for their documents and belongings to be inspected by the Israeli army at a checkpoint outside the West Bank city of Bethlehem, March 19, 2017. (Anne Paq/Activestills.org)

One of the Israeli government’s senior-most ministers said last year that Israeli BDS advocates must be made to pay a price for their political activism. A series of developments over the past month or so seems to demonstrate that he was completely serious, and that efforts to target nonviolent political dissidents are escalating to worrying levels.

First came the law banning entry into Israel of people who have made public calls for boycotts of Israel or its settlements. The law also bars entry for anyone who has even pledged to participate in such a boycott, which could easily be interpreted to include merely signing an online petition against buying settlement products.

Then, a few weeks ago, police detained a prominent Jewish-Israeli activist for allegedly “possessing BDS materials,” whatever that means. The official reason was suspicion of incitement. He was released after a short while — because possessing BDS materials is not a crime in Israel — but the incident demonstrated how the new entry law sent a message to regular Israelis: BDS is dangerous — something one might reasonably report to police.

This week, the same government minister who said BDS activists should “pay a price” for their political activism, Public Security Minister Gilad Erdan, proposed an official blacklist of individuals and entities that “willfully, consistently and methodically called publicly for a boycott of Israel [or its settlements],” according to a report in Haaretz.

Along with other policies and propaganda targeting Israeli human rights groups and anti-occupation activists, the government has made clear that there is no legitimate space for dissent in Israel these days. Human rights groups are painted as hostile foreign agents, foreigners who boycott settlements are forbidden from entering the country, and intelligence resources are even being directed to surveil and smear opponents of Israeli policy vis-à-vis the Palestinians.

The recent developments are only new, however, in as much as they are now targeting people whose ethnic and religious privilege once granted them relative immunity. Israel has for decades put actual travel bans on Palestinians engaged in international advocacy challenging the occupation, barring them from leaving Israel or the occupied Palestinian territories.

For seven years, Israel barred Shawan Jabarin, head of one of Palestine’s most prominent human rights organizations, from leaving the West Bank to speak about Israeli rights abuses.

This week, after months of empty threats by Israeli officials to revoke the residency of Omar Barghouti, co-founder of the Palestinian BDS movement, Israeli police detained and interrogated the boycott advocate for several days on suspicion of tax evasion, once again barring him from leaving the country.

Those are actual travel bans. 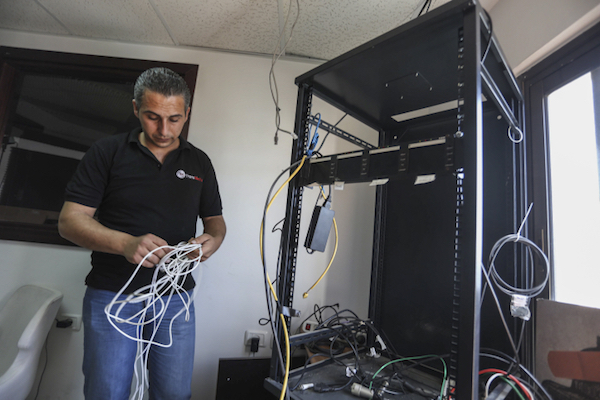 An employee of the ‘Palestine Today’ television station sorts through what remained after the Israeli army raided its offices, seized its equipment, and arrested its manager over allegations of ‘incitement,’ March 11, 2016. (Flash90)

Over the years Israeli military and civilian authorities have shut down countless Palestinian media outlets on both sides of the Green Line. Political movements and human rights groups have been declared illegal associations. Poets and journalists have been arrested and jailed under the catch-all, often-frivolous accusation of incitement — often without any charge at all. Organizers are arrested and thrown into military prison for nonviolent political protest, which is a crime for the millions of Palestinians living under Israeli military rule. Dozens of elected members of Palestine’s parliament have been jailed by Israel. Palestinian politicians serving in Israel’s own Knesset have been persecuted, accused of treason and incitement, forced into exile, and face regular attempts at disqualifying them from running for elected office.

The list of methods and instances of Israel suppressing dissent among the various Palestinian populations under its control goes on and on. Some are new, but most date back to the early years of the state when Israel held large swaths of its Arab population, Israeli citizens, under military rule.

The new part of what is happening today is not that Israeli authorities are suppressing dissent among those it perceives as a threat to its 50-year undemocratic military rule over millions of Palestinians in the West Bank and Gaza Strip. What’s new is that the group of people the state perceives as a threat to that reality has grown to include a small but significant number of American and Israeli Jews.

Several pro-Israel groups have promoted a strategy in recent years of trying to drive a wedge between so-called “soft critics” of Israel, whose criticism is focused mostly on the settlements and occupation, and those active in the BDS movement. With laws now barring foreign critics from even entering the country and blacklists of citizens who advocate BDS, however, the Israeli government is sending a terrifying message: Israel and its 50-year occupation have become so inextricable that opposing one threatens the other. Just remember, Palestinians have been on the receiving end of that message for decades.