The twisted logic of Peres’ Grapes of Wrath operation was all about hitting civilian targets. That was the reason refugees sought shelter in Qana’s UN base in the first place. 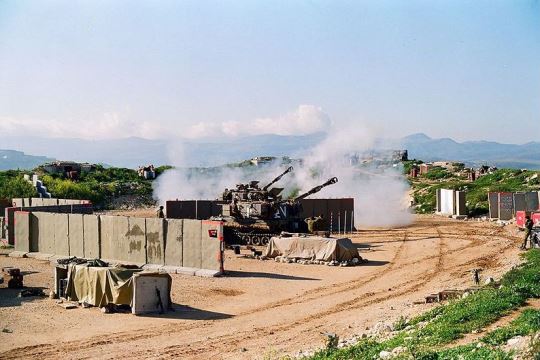 Yigal Sarna, a journalist for Israeli daily Yedioth Ahronoth, published a dramatic and serious accusation over the weekend against Naftali Bennett, the head of the Jewish Home party. Bennett was the commander of a small IDF unit that operated inside the “Security Zone” that Israel occupied in South Lebanon during the 1996 military operation Grapes of Wrath. According to Sarna, Bennett decided on his own to diverge from his orders, got his soldiers into trouble, ordered supporting fire from the regional artillery unit — and those shells hit the UN refugee camp in Kafr Qana. One hundred and two civilians and UN workers were killed and Israel was forced to end its military operation. The incident was later known as the Kafr Qana massacre.

Bennett got some surprising support from the chairman of the board of B’Tselem, Israel’s preeminent human rights organization. David Zonsheine, who served in the same unit and took part in the mission, claimed on Facebook that there was nothing wrong with Bennett’s actions that night and that in any case, he couldn’t have been held responsible for the killing. Other members of Maglan came out in support of Bennett as well.

I tend to agree. The blame lies much higher in the chain of command: those who came up with the twisted logic behind Grapes of Wrath, and most notable then prime minister Shimon Peres, IDF chief of staff Amnon Lipkin Shahak and head of Northern Command Amiram Levin.

As was the case in a similar operation against Hezbollah in 1993, the idea in Grapes of Wrath was to “pressure” the civilian population in southern Lebanon, creating a flow of refugees heading north to Beirut, which would make the Lebanese government demand that Syria force Hezbollah to avoid attacks on Israelis and IDF forces. In other words, to deliberately attack civilian targets in order to deter a paramilitary organization that was operating in the region. This is how the official Israeli Air Force website describes Grapes of Wrath (the IAF’s English site has an entirely different text):

Operation Grapes of Wrath, which began on April 11 1996, took a similar path as “Operation Accountability” in July 1993: Massive bombing of the Shi’ite villages in South Lebanon in order to cause a flow of civilians north, toward Beirut, thus applying pressure on Syria and Lebanon to restrain Hezbollah.

Such twisted ideas were bound to lead to a disaster.

Grapes of Wrath began with dropping leaflets above Shi’ite villages calling on the population to leave. Unpopulated areas around the villages were also bombed. Sure enough, most civilians fled north or searched for shelter in refugee camps, like the UN base in Kafr Qana.

At some point the army began bombing the villages themselves. I remember this day vividly because I was leading a small force of several infantry soldiers and a tank inside the strip when I was ordered to shoot at several buildings in a village on a hill north of us. We were under the impression that they were military targets. Only after taking down a handful of them did I understand that my commanders were marking random targets – houses they believed were empty (but had no real way of knowing) – in an effort “to increase the pressure” on the civilian population (half a million Lebanese ended up being displaced during the operation).

We fired until the tank ran out of shells. Luckily, nobody was hurt. Yet it’s clear that the logic here – to deliberately hit civilian targets – was even worse than in the Qana incident, where at least formally there was some operational logic behind the shelling (an attempt to lay down cover fire for Bennett and his men). I must add that it took me several days to understand what it was exactly we were doing – at whom and why we were shooting – and another several years until I internalized the full meaning of this event, resulting in a change of my entire thinking about the army and the politics of war and peace.

Shimon Peres lost the 1996 elections to Netanyahu because of the Qana incident (the massacre made Peres lose the support of many Palestinian citizens of Israel. He came 30,000 votes short of winning). Still, much of the Israeli left never learned its lesson and is still supporting devastating military operations against civilians – ones that far surpass anything we ever did in South Lebanon. Before talking about Bennett, many in the so-called peace camp should look inward.

Translated from my Hebrew blog at Local Call.