‘All the targets hit by the IDF in Gaza were attacked morally; those killed are responsible for their own deaths. And Netanyahu – he just wants the Gazans to be safe.’

It is moral because we told them to leave, and those who stayed did so at their own peril. It’s moral because Hamas encouraged them to stay, that’s why this is a self-inflicted genocide carried out by Hamas. The Palestinians who died in Shejaiya, in Khan Younis, actually everywhere and always, are to blame for their own deaths. Maybe it’s only the children who aren’t guilty of their own deaths – maybe it’s the parents who are to blame. As for the elderly people who died, that’s definitely Hamas’ fault. Whichever way you twist it, that blood was not spilled by our hands.

How deeply can you suppress the denial by Israelis? How can the prime minister – the prime minister of the army whose air force killed four nameless children on the beach in Gaza for the world’s cameras to see – look straight into the camera and tell the Palestinians of Gaza, “We want you to be safe”? 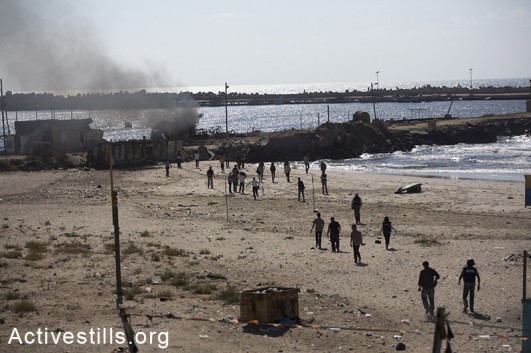 Paramedics and people run at the scene where four Palestinian children were killed by Israeli military shelling at the harbor and nearby beach of Gaza City, July 16, 2014. Four children; Ahed Bakr, 10, Zakaria Bakr, 10, Mohd Bakr, 11, and Ismail Bakr, 9.; were killed during the attack. (Anne Paq/Activestills.org)

Anyone who has been listening to Palestinian voices in Gaza in recent weeks has heard one message repeated over and over through the thunder of Israeli bombardment: No place is safe in Gaza, a bomb can fall anywhere, anytime, on anyone. And there’s nowhere to run, because you can’t leave Gaza; while in it – inside this narrow, impoverished and overpopulated strip of land – nowhere is safe.

Out of the thousands of targets “attacked” morally, none of these “surgical” bombardments featured in the IDF spokesperson’s clips or the few bombardments cancelled at the last minute, nor did any of the prime minister’s pleas manage to convince Gazans that Israel wishes for their safety. Perhaps they were actually convinced by the overflowing morgues, or maybe they were thinking of the more than 177 dead children. Maybe they were thinking about the Al Batsh family and its 17 dead, or maybe about the Al Haj family and its eight dead.

After the “surgical” phase they moved onto the heavier instruments. The moral side called on the residents to leave and the immoral side told them to stay. Many chose to stay: Some presumed that it was safer at home; others were afraid to leave, perhaps caring for an elderly mother, a relative in a wheelchair or small children. Maybe they stayed because Gaza is closed from all directions – where could they run for safety? 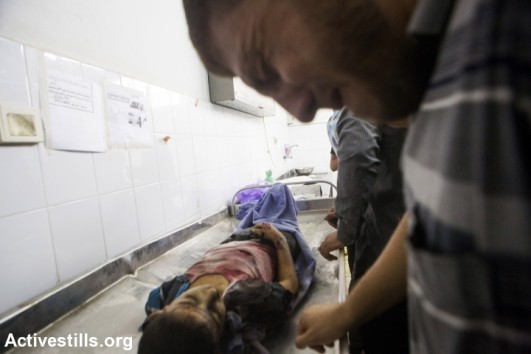 A relative cries over the body of one of the children killed earlier by an Israeli attack in a playground in al-Shati refugee camp, Gaza City, July 28, 2014. Reports indicate that 10 people, mostly children, were killed and 40 injured during the attack, which took place on the first day Eid. (photo: Activestills)

Hamas most certainly intended for all this to happen; we, most certainly, did not intend for any of it. But if intent is the outcome expected of a reasonable person, then what was the intent of the person who dropped bomb after bomb on one house and then another, and buried entire families? Those families apparently weren’t persuaded to flee for their lives after the bombarding army’s courteous announcement.

Israel and Hamas both know – it is impossible not to know – that the inevitable result of the war in Gaza is devastating civilian losses there. The bloody experiences already accumulated are sufficiently horrifying to establish with confidence that this is the inevitable outcome, that any claim about the absence of intent is simply detached from reality and renders the word “intent” totally devoid of meaning.

But the main point is that it is moral, and we can move onto the next house, the next family, the next neighborhood. In Beit Hanoun, in Beit Lahia, in Jabaliya, there are another few dozen, hundred, thousand cowardly Palestinians, afraid of the democratic army for no reason at all, and who have every reason to fear the terrorists, whose morality lacks values and is undemocratic. Arabs are cowards; they shake with fear. It will of course be done morally and, in any case, whatever happens Hamas is to blame. Always. What the IDF does is moral. Always. And legal too. The main thing, once again, is that the blood that we spilled was not spilled by our hands.

Hagai El-ad is the CEO of B’Tselem.

Related:
What Israel’s ‘precision bombing’ of Gaza looks like
Catch-22: When a humanitarian ceasefire becomes a death trap
WATCH: Whole Gaza neighborhood destroyed in an hour