‘For me, today is one of the days of the revolution,’ Egyptian poet Zain El-Abdeen Fouad says, describing the recent unrest as part of a process of a continuing social transformation. ‘The [revolt against Mubarak] sparked the revolution and it never ended. The revolution will continue until it achieves its goals.’ 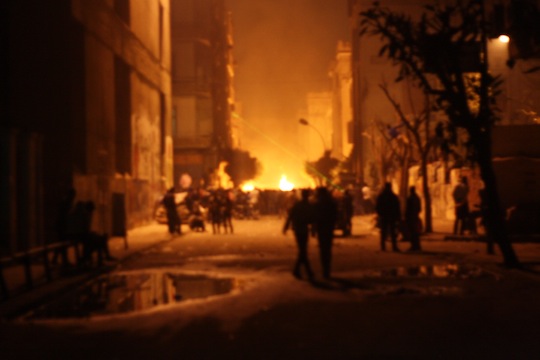 CAIRO – Walking through Cairo’s Munira neighborhood on the third day of clashes since the second anniversary of Egypt’s revolution, riot cops sit behind barbwire awaiting protesters’ return following a night of clashes.

Just blocks from Tahrir Square and the U.S. and British Embassies, the neighborhood is increasingly looking like the old Baghdad Green Zone, with concrete walls carving up downtown Cairo and blocking routes between Tahrir, government ministries and foreign missions. Regular clashes between thousands of protesters and police have raged at the end of my block as the death toll across the country mounts. The teargas lingers in the towering apartment-lined side streets long after everyone has dispersed.

I returned to Cairo on the afternoon of the 25th as hundreds of thousands gathered in Tahrir Square to air their discontent at a stalled revolution that has yet to fulfill demands of freedom, dignity and social justice. Riots raged on the fringes of Liberation Square; youth on Mohammad Mahmud Street hurled rocks over a towering concrete barrier at security forces guarding the Parliament. In a display reminiscent of anti-wall demonstrations in the occupied West Bank, security forces responded with volleys of tear gas fired over the concrete blocks, temporarily clearing the street under a suffocating white cloud.

But the driving force behind the discontent in Egypt is not the same as in Palestine, or Iraq under the Americans. The rage here emanates from a political tug-of-war, fought out in the streets, between the legacy of the authoritarian, elitist politics of the Mubarak regime and popular demands for rights and real inclusion in the new Egypt.

“For me, today is one of the days of the revolution,” Egyptian poet Zain El-Abdeen Fouad tells me on January 25, in a packed, narrow alley filled with shisha cafés sprawling into the streets near Tahrir. As demonstrations swirl around the adjacent blocks, he describes the anniversary of the revolution not as a memorialization of what has changed, but as another day in the process of a continuing social transformation. Fouad is a poet of the Arab street and contends that the artists out with him today are the beginnings of a cultural revolution. As he speaks, Fouad is regularly interrupted by protesters stopping by to wish him well.

For Fouad, the main success of bringing down Mubarak has been the psychological transformation of Egyptians. Fear of publicly engaging in politics has collapsed and a sense of grassroots transformation of the state and society is taking hold.

Yet, the reality of looming IMF-imposed austerity – that will end much-needed state subsidies of food and fuel – threatens to derail the revolution’s demand of social justice through economic redistribution. Meanwhile, December’s constitutional referendum on amendments pushed by President Morsi and passed amidst mass boycotts enshrined a legal process of military trials for civilians, increased the influence of Islam over the state, put limits on political freedoms and made no reference to workers’ or women’s rights, setting the tone for the continued use of Mubarak-era top-down politics of exclusion to rule the country.

“We cannot achieve everything in one day,” Fouad contends. “The [revolt against Mubarak] sparked the revolution and it never ended. The revolution will continue ‘till it achieves its goals.” 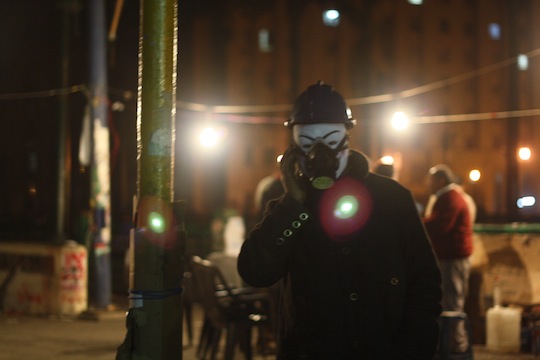 A protester on the edge of Cairo’s Tahrir Square, January 26, 2013 (Photo: Jesse Rosenfeld)

His sentiments are evident in city streets across Egypt as protests rage, days on from January 25. Outrage increases along with the death toll and social divisions are emerging over the Port Said verdict, condemning to death 21 local Ultras over a February 2012 soccer riot, in which at least 79 people were killed. Still, no verdict has been issued for those members of the security forces accused of being involved. Much of the anger in Port Said is directed at security forces, who are seen as scapegoating the soccer rioters in order to avoid their showing their own complicity.

In Cairo, protesters have been targeting the Ministry of Interior (the hated symbol of Mubarak-era authoritarian power) and the Shura Council (Egypt’s upper house of parliament dealing with the constitution) resurrecting the 2011 chant, “the people want the downfall of the regime,” this time in reference to Morsi.

The downtown of Egypt’s capital has turned into a maze of concrete and chaos. Wandering through the city center trying to find a route home on Saturday evening, I attempt to duck down empty side streets only to realize that they are so filled with tear gas that I’m forced to stagger back towards the center of Tahrir for a breath of normal Cairo air.

Taking another route out of the square I run into masses of youth on The October 6 Bridge and Corniche setting fires and hurling stones and Molotov cocktails at police, who in turn, blanket the area in vast clouds of tear gas. Nonetheless, there are few places for me to go as my roommate sends word that my street is also blocked off because of intense clashes.

So I watch as young people in Guy Fawkes masks and the balaclavas of the newly declared ‘Cairo black bloc’ fight with the police. For an uprising that inspired anti-austerity movements in Europe and Occupy in the US, it seems only fitting that the black bloc – a new force in Egypt’s street protests – would emerge as the emblem of a 21st century revolutionary city. But whether they are actually anarchists or just importing Western protest aesthetics is difficult to discern as many refuse to talk to journalists, myself included, about what they believe.

As the anniversary of the 2011 revolution continues and memories of how far people have come are contrasted with the realization of how far they may need to go, the legacy of the old regime compounds with the current crisis and disillusionment. Cairo is a city where the street is fighting block by block for demands of the revolution amidst the realization that if it doesn’t, the Egyptian state could revert into a new form of its old self. In a country where – as the documentary about Clash lead singer Joe Strummer is titled – the future is unwritten, this is a struggle between where Egyptians have come from and where they are going.