A new play tells the story of Aseel Asleh, one of the 13 Palestinians killed by police inside Israel at the start of the Second Intifada. Playwright Jen Marlowe is bringing it to black colleges in the U.S. in the hopes of connecting two struggles. 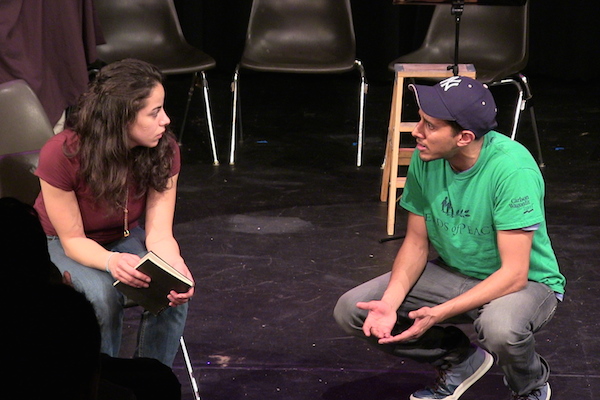 Amel Khalil and Kesav Wable as Nardeen and Aseel in “There Is a Field.”

Before his death, Palestinian teenager Aseel Asleh dedicated himself to his Jewish Israeli friends. As a loyal alumnus of Seeds of Peace, a coexistence summer camp, he was convinced that the promise of peace lay in forgiveness and reconciliation.

More than 15 years after he was killed at the age of 17 by Israeli police, a play about his life and death is being used to foster a very different dialogue. “There Is a Field” explicitly aims to build connections between movements for Palestinian rights and racial justice in America. It is presently on a tour that focuses on historically black colleges and universities in the eastern United States.

Aseel was shot to death in his hometown of Arrabe in the early days of the Second Intifada, while demonstrating in solidarity with Palestinians from the West Bank and Gaza. He was one of 13 Palestinians – including 12 citizens of Israel – killed inside Israel in a single week in the notorious “October events” of 2000. He was killed and buried in a Seeds of Peace t-shirt.

Jen Marlowe had been the boy’s camp counselor. In search of a way to honor Aseel’s memory and cope with the grief that shook her community, she set out to write a play about his life. “There Is a Field” took shape over the next 15 years, finally premiering last month in New York. The play is styled as a documentary, comprised of artful transitions between family members’ reflections, materials from the investigation into Aseel’s death, and emails he left behind. (An early digital native, he spent hours online corresponding with his fellow “Seeds.”)

Much changed over the course of the play’s 15-year journey to fruition. Investigations into the killings closed without a single indictment, despite damning findings of excessive police violence by the government-established Or Commission. Relations between Israelis and Palestinians on both sides of the Green Line devolved to their all-time present low. As hopes for peace dwindled, so did the credibility of dialogue-based programs like Seeds of Peace. And a new protagonist took Aseel’s place in “There Is a Field.” 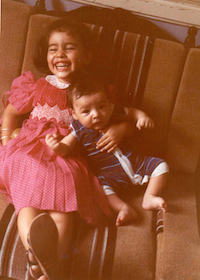 Aseel and Nardeen as children.

Marlowe hadn’t planned for Nardeen, Aseel’s sister, to become the lead character, but her journey through grief and politics took center state as the play came together. We learn about the siblings’ relationship through email exchanges, phone conversations, and Nardeen’s memories. The script beautifully renders both their attachment to one another and the fundamental differences in their personalities, political identities, and relationships to the Jewish state.

In one scene, Nardeen remembers childhood visits to a pool located in a nearby Jewish community. Aseel is typically adaptive and warm, easily mingling with the Jewish children, while she can’t overcome her sense of alienation and her anger over the bus that wouldn’t enter the Palestinian village to pick them up. This difference persists – Aseel is thrilled by the relationships he forges through Seeds of Peace; Nardeen, by now a medical student at Hebrew University, believes his time would be better spent fighting for Palestinian rights than playing pretend peace with teenagers on the cusp of taking up arms against his people. Her experience is one of dashed hopes; when she finds herself on the verge of friendship with a colleague named Yael, she is quickly disappointed when Yael expresses horror to learn she won’t be celebrating Israel’s Independence Day. (A bit more on Nardeen’s evolution in this New Yorker profile about her husband, Joint Arab List head Ayman Odeh.)

After Aseel’s death, many (though not all) of his fellow campers indeed became soldiers, at a time of peak violence in the region. This both vindicates Nardeen and speaks to Marlowe’s own evolution. She speaks of her Seeds of Peace days as “political lifetimes ago.” Today, she says she doesn’t believe in the power of dialogue programs to subvert a status quo of state violence. 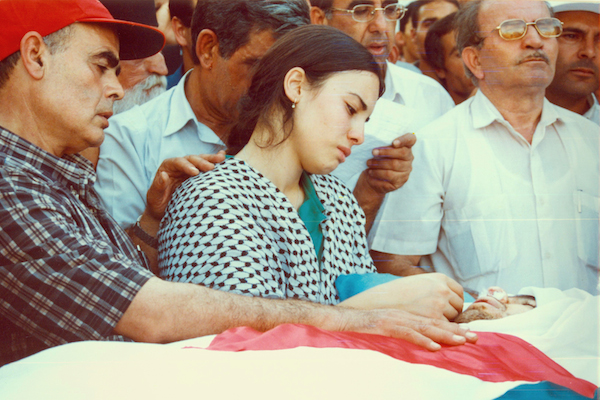 Nardeen at her brother’s funeral in October 2000.

Instead, she wants “There is a Field” to be a vehicle for activists against structural racism, from Palestine to Ferguson, to join in a shared struggle. The growing influence of Black Lives Matter and the popularization of intersectionality discourse – which presumes connections between different struggles for equality – frames the play’s long-awaited entry to the world. This timing is no coincidence. Marlowe returned to the play in earnest as demonstrations raged across the U.S. against the police killings of Michael Brown, Eric Garner, and a string of other unarmed black men.

Marlowe seems to be succeeding in her goal, thanks to her own network as a longtime activist for criminal justice reform, and partnerships with groups already working on building ties between racial justice activists in both contexts. Dream Defenders, an American anti-racism group that led a delegation to Israel and Palestine last year, has helped arrange showings. Among its sponsors, the play has counted the African American Policy Center (founded by Kimberle Crenshaw, who coined the term “intersectionality”) alongside more traditional partners like Jewish Voice for Peace and Adalah, the Palestinian human rights group that led the legal struggle on behalf of the families of the October 2000 victims.

Audience members haven’t needed much prompting to locate their own experiences in this story of killing and impunity. It has shown to packed rooms at a number of universities, including historically black schools like Howard University and Bowie State University. At the end of each performance, audience members are asked to share words that come to mind. At one show, Marlowe told me that the first three words shared were “familiarity,” “Ferguson,” and “Baltimore.” (The latter two being the sites of high profile recent police killings.) “They weren’t just responding to themes of state violence and impunity,” she said. They experienced “very specific resonances of their lived experiences.”

The play depicts Nardeen as a reluctant spokesperson for justice in the years following Aseel’s death. While her heartbroken parents hold onto their son’s memory by throwing themselves into an ultimately failed fight for legal accountability, Nardeen prefers to remember privately. It is partially this reluctance that makes her such a relatable protagonist. Aseel’s zeal for reconciliation seems tragically quaint from the vantage point of history; his burial in a Seeds of Peace t-shirt would seem too obvious in its symbolism if it didn’t actually happen.

At a time when coexistence projects can seem a futile endeavor, perhaps it is this vision – of unity between disparate movements for racial equality – where an elusive hope lies.

“There Is a Field,” written by Jen Marlowe and directed by Noelle Ghoussaini, is presently on tour. It returns to New York for two performances on April 13 and 14. Information about dates can be found here.