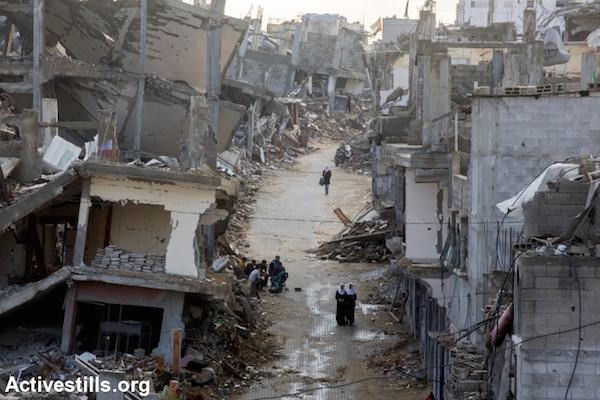 They fled when the flyers fell from the sky, Israeli military orders dropped like confetti on the masses. Evacuate, they said, or else. Seek shelter now.

One week of sorties, and Ibrahim made the call: We leave now — my wife and I, our seven children, our children’s children.

But the Abu Shuqah family never found shelter. The closest they came was a cardboard factory — somewhere between Bureij and Nusseirat, two refugee camps along Gaza’s coastal flats.

“We stayed in the storeroom about two weeks,” Ibrahim recalled. “There were mattresses, water, gas, and electricity there. Things were good.”

Things were “good” — until the shelling began.

To internalize that familiar refrain about Gaza — that nowhere there is safe — consider the life-or-death moves of a father and his kin. That, in one sense, is the key takeaway of “Black Flag,” the latest in a slew of reports — this one by the Israeli human rights organization B’Tselem — about “Operation Protective Edge” and its lethal prosecution.

B’Tselem’s report, released today, explores “the legal and moral implications” of one particularly efficient Israeli tactic during this summer’s assault: targeting residential buildings. The group estimates that just over a quarter of Palestinian fatalities during the “fighting” owe to this tactic, which claimed 606 lives — 70 percent of them “either under 18, over 60, or women.”

B’Tselem investigated 70 such incidents, including the operation’s first. “On the first day of the fighting,” the report recounts, “the military attacked the Kaware’ family home. The house collapsed. Nine people, including five children aged 7 to 14, were killed.”

“Even if the Israeli cabinet thought this policy would bring an end to attacks on Israeli communities, it should not have implemented it because of its foreseeable, horrifying consequences as well as because of the black flag of illegality flying over it.”

Of course, B’Tselem’s report coincides with the recent Palestinian decision to sign the Rome Statute, a precondition for leveling war crimes charges against Israeli leaders at the International Criminal Court. B’Tselem, though, stops short of naming Israel’s actions “crimes” under international humanitarian law, or IHL. It concludes instead that, “at least in some cases, the military’s actions ran contrary to IHL provisions and, in other cases, there is grave concern that they did so.”

At the same time, the report pulls no punches when describing Palestinian fighters’ actions, stating clearly B’Tselem’s blanket contention that “Hamas and other organizations operating in the Gaza Strip do not abide by IHL.”

That kind of across-the-board statement would seem to ignore a crucial fact about Operation Protective Edge — that it was, in fact, a war of one army. But B’Tselem Executive Director Hagai El-Ad, in a letter to Israeli Prime Minister Benjamin Netanyahu released with today’s report, made clear that placing “responsibility for harm to civilians” solely on Hamas was a red herring.

B’Tselem cites the military’s claim that residential buildings were legitimate military targets because they housed “terror infrastructure” — either in the form of materiel or operatives who purportedly hid them. But throughout the Israeli assault, “no official claimed that there was any connection between a house that was targeted and any specific military activity there,” recounts B’Tselem.

On a related point, B’Tselem takes issue with Israeli decision-makers’ definition of “proportionality.” The principle, according to the report’s authors, is that so-called “collateral damage” cannot be justified “when harm to civilians as a result of an attack is projected to be excessive in relation to its anticipated military advantage….”

As I read it, that’s legalese for a pretty simple point: If killing nine members of the Kaware’ family does nothing to shift the balance of military power, you can’t do it — at least not under international humanitarian law. And what combination of presumed military armaments — or battlefield knowledge — could so fill a Gaza home that it would constitute a threat to Israel’s US-backed military?

Even if that weren’t a rhetorical question, even if Israeli commanders actually believed that killing hundreds of women, children, and elderly was simply a means to a legitimate military end, they still had an obligation to at least try to avoid casualties, to warn civilians that deadly violence was afoot.

So did they? Let’s look at what happened when the ten members of the Abu Shuqah family heeded Israel’s warning. A week into Israel’s bombing campaign, we know, they left their home in the Bureij refugee camp and made it to the cardboard factory — this after a short waylay at Ibrahim’s brother-in-law’s house. (It was a two-hour waylay, in fact — just long enough for a bomb to fall nearby, prompting the family to keep moving.)

After two weeks in which things were “good” — with mattresses, gas, electricity, and water — the factory storeroom was hit by shrapnel. Again, the Abu Shuqah family made haste, this time to a relative’s house in the Nusseirat refugee camp (where the United Nations estimates that 90 percent of the available water is “unfit for human consumption”).

It was there that, on July 31, 2014 at 8:30 PM, Ibrahim Abu Shuqah’s wife, two of his daughters, and a granddaughter were killed in an Israeli airstrike that, in an instant and without warning, claimed the lives of 13 people, hunkered in a home in a refugee camp by the sea.

It was supposed to be their shelter.

None of the surviving family members of this bombing-among-many knows why their loved ones had to die — or what military advantage Israel derived.