Julie Weinberg-Connors, who is in the process of making ‘aliya,’ or immigrating to Israel as a Jew under the Law of Return, was told that they were being deported because of the army’s objections over their visits to the West Bank. They were eventually let in. 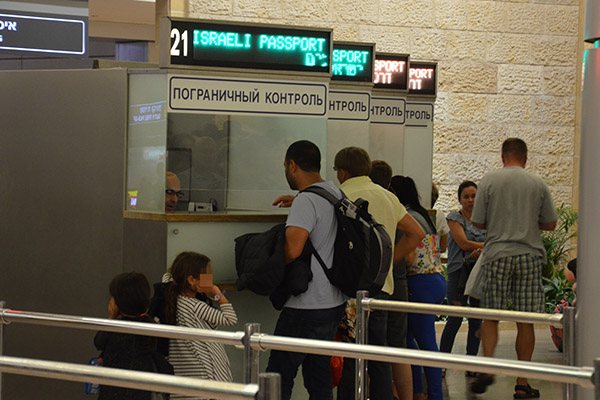 Jewish-American Julie Weinberg-Connors was denied entry to Israel Wednesday night and told that “the [IDF] does not want you in Israel,” where Weinberg-Connors holds residency and is in the process of immigrating under Israel’s Law of Return.

Border Control agents eventually reversed course and allowed Weinberg-Connors, 23, into the country after media outlets, including +972 Magazine, and several members of Knesset asked the Interior Ministry and Israeli army about the denial.

Weinberg-Connors was meant to start yeshiva studies at the Pardes Institute on Thursday.

According to Attorney Leora Bechor, authorities had already flagged and questioned Weinberg-Connors about their political activity and affiliations before arriving back in Israel on Wednesday, where the American citizen has been living already for a year. (Weinberg-Connors prefers they/them pronouns.)

“They already knew that they wanted to deny her [entry] and they just had to find a reason,” Bechor told +972 Magazine, noting that Weinberg-Connors was flagged for questioning before border control authorities had a chance to ask her any questions. “It was clear their plan was to make sure she did not enter.”

Bechor, who was on the phone with Weinberg-Connors during parts of the detention and interrogation, said she heard a border control agent tell her client, “the Civil Administration does not want you in Israel.” The Civil Administration is the Israeli military body that administers the occupation of the Palestinian territories. The army, however, does not have the authority to determine who may enter Israel.

The denial of entry form given to Weinberg-Connors said they were being deported back to the United States for illegal immigration considerations. Weinberg-Connors was asked about visiting Khan al-Ahmar, a Palestinian village under imminent threat of forced displacement and demolition. Ultimately, they were allowed to enter after signing a document agreeing not to visit the West Bank.

Weinberg-Connors is in Israel on an A1 visa, a temporary residency status granted to people who the state has decided are eligible for citizenship under the Law of Return, or in other words — Jews.

Israel’s “Law of Return” grants almost automatic citizenship to anyone with one or more Jewish grandparent, irrespective of whether they can trace heritage or have family ties to Israel. Palestinian refugees who were born, or whose parents or grandparents were born in Israel, are prohibited from immigrating to Israel.

Prior to the “Jewish Nation-State Law,” which passed earlier this year, the Law of Return was one of a small number laws on the books that explicitly grants certain rights only to Jews. Most other discriminatory laws do so without specifying a specific religious or ethnic group that is granted certain rights or privileges that are denied to others.

Denial of entry has become more common for foreigners — including Jews — visiting Israel in recent months, particularly those critical of Israeli policy vis-a-vis the Palestinians. Palestinians, Arabs, and non-Jews have been systematically denied entry to Israel over their politics and identity alike for years.

“This is the first case, to the best of my knowledge, of a person who was seeking to make aliyah who has been denied entry while they are actually in the process of having their aliyah application processed,” said Bechor.

Israeli citizens are not allowed to enter Palestinian-controlled cities in the occupied territories without military approval, but this restriction does not apply to non-citizens like Weinberg-Connors.

Weinberg-Connors signed the form agreeing not to enter the West Bank under duress, Bechor, the attorney, said, “because they told her if you do not sign the form we are not going to let you in.”

“It showed that there’s zero protections under the law so long as your political beliefs don’t match the consensus, you don’t have a place in Israel even if the law says that you do,” said Bechor.

Weinberg-Connors tried to present border control agents all of the aliya paperworkbut the border agents were not interested in seeing it, or in the fact that they had an A1 visa, said Bechor.

“She had a valid visa that they revoked. It is not just that she is an American who is coming on a visit, and they denied her entry – they revoked the visa that she has, temporary residency, without giving her any due process,” she added.

A spokesperson for the Population and Immigration Authority issued the following statement in response to a query about the Weinberg-Connors’ case:

The case concerns an American citizen who arrived to Ben-Gurion Airport in the evening, and after questioning her, it became clear that she was planning to stay in areas administered by the Palestinian Authority without the necessary approval from the Coordinator of Government Activities in the Territories (COGAT). Upon checking with relevant security personnel, a conclusive recommendation was given not to approve her entry, but, after she committed to apply for the required permit in case she does plan on visiting the territories, her entry was approved.

A spokesperson for the COGAT, of the Israeli army, had not issued a formal response at the time of publication. It will be added here if and when it is received.