The arrest appears to prove what footage and family indicated from the start: Live bullets were fired at protestors, unlawfully, as the victims posed no immediate threat. 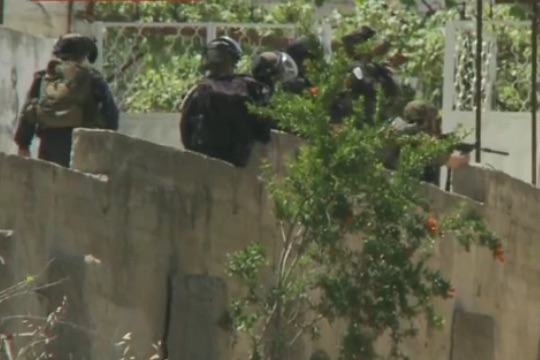 A Border Police officer was arrested Tuesday on suspicion of shooting Nadim Syam Nuwara (17) with live ammunition, one of two Palestinian teenagers killed during Nakba Day protests in the West Bank village of Beitunia last May. The border policeman is being charged with murder and his commander is also facing charges for not reporting the incident.

The shootings, which were caught on film by CCTV cameras, showed that the protesters posed no immediate threat to the soldiers at the time they were shot. It was unclear whether the policeman was also implicated in the killing of Mohammad Mahmoud Odeh, 16, who was killed under nearly identical circumstances in the same place on the same day. The investigation into the incident is being conducted by a unit with the police force.

At the time, the IDF insisted that no live bullets were fired, and that it only used crowd dispersal methods (which in the West Bank, includes rubber bullets). Israeli military investigators even claimed that the shots may have been fired by the Palestinian side, rather than by Israeli troops. Some top Israeli officials even went as far as suggesting the video was forged or tendentiously edited.

Although technically part of the Israel Police, the Border Police is often deployed under the command of the IDF in the West Bank. Many Border Police officers are army conscripts.

But the head of the Ramallah emergency room that treated the youths, Dr. Samir Saliba, stated in his medical report at the time that the internal damage and the exit wound could have only been caused by live fire. An autopsy on Nawara’s body, requested by his family, also indicated live fire was used and CNN provided footage that showed a Border Police officer shooting at the exact moment Nawara was shot.

In the CNN video below, a puff of smoke can be seen coming from the weapon of the border policeman third to the left, and a shell can be seen flying from his rifle at minute mark 1:53-1:52.

B’tselem’s initial findings at the time led to the “grave suspicion that forces willfully killed” the two and injured two others.

Responding to news of the arrest on Wednesday, B’Tselem spokesperson Sarit Michaeli told +972 that the authorities are now admitting they provided erroneous information at the time. “We demand an apology from all the politicians and reporters who slandered B’Tselem for providing information and sticking up for the truth from the start.”

The details of the investigation are still under gag order, but according to a report in Haaretz, all the soldiers and police officers investigated at the time denied using live fire.

What led to the arrest Tuesday was a bullet found in Nawara’s backpack, which led investigators to the gun it was fired from. It is unclear why it took six months to make the arrest, since the bullet was provided immediately after the shooting.