Over the past several months, Jerusalem Police has been stepping up its use of a new weapon: black-tipped sponge bullets. 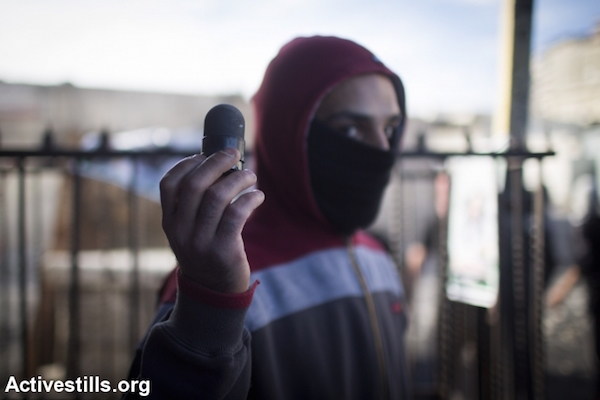 Israeli Police wounded a 10-year-old Palestinian child in the eye Thursday afternoon while dispersing protesters near the Shuafat refugee camp in Jerusalem, according to Arabic media outlets in East Jerusalem. The boy, who was most likely hit by a black-tipped sponge bullet, was hospitalized in moderate condition in Hadassah University Hospital. It is unclear what will be the fate of his eye.

Jerusalem Police responded to the incident, stating that “Public works projects take place in the Shuafat refugee camp, including the expansion of an entry/exit lane and a large parking lot for students. Several dozen residents assembled and began to throw stones at Border Policemen, who were guarding the projects. The Border Police used riot-dispersal means. Among the rioters, a boy was evacuated by the Red Cross to the checkpoint after likely being hit by a sponge-tipped bullet. From the checkpoint he was transferred by an ambulance to the hospital.”

The connection between shooting a 10-year-old boy and the details of the public works projects is not entirely clear.

Over the past several months, Jerusalem Police has been stepping up its use of a new weapon: black-tipped sponge bullets. These have already led to the death of one teen, have caused four children to lose their sight, and have led Walla! and Activestills photographer, Tali Mayer, to sustain facial fractures. Just two months ago, the Association for Civil Rights in Israel (ACRI) called on the Attorney General to put an end to the black-tipped sponge bullets.