According to the Israeli media, the soldiers who took part in a botched intelligence operation in Khan Younis earlier this month were dressed up as humanitarian workers. If the details are true, it could put countless people in danger. 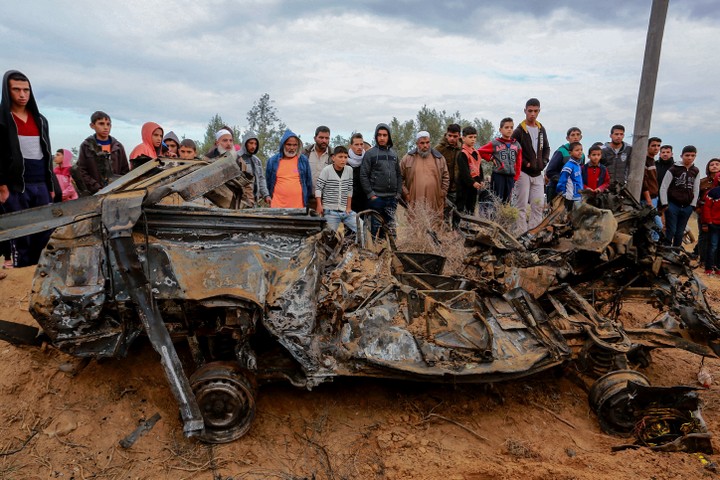 Palestinians stand next to the remains of a car destroyed during fighting between Hamas militants and Israeli special forces in Khan Younis, Gaza Strip, November 12, 2018. (Abed Rahim Khatib/Flash90)

Israeli troops impersonated humanitarian workers in order to carry out an intelligence operation deep inside the Gaza Strip, according to details of the botched operation leaked by Hamas and reported by the Israeli media. If true, the operation could put bona fide humanitarian operations and employees at risk in the coastal strip, where two-thirds of the population is reliant on humanitarian aid.

The operation gone wrong, which left both senior Israeli and Hamas commanders dead, brought the two sides to the brink of war earlier this month.

The Israeli military censor forbade Israeli media outlets from publishing most details of the incident. After Hamas began leaking details of what happened, however, some Israeli journalists followed suit, primarily repeating the information released by Hamas, and presumably with the permission of the IDF Censor.

On Friday, Israeli journalist Ehud Yaari reported that the Israeli special forces team had entered Gaza through one of the two civilian crossings into the strip, either Erez or Rafah, with forged documents.  “They rented a house in Gaza and operated under the guise of a humanitarian aid organization,” Yaari said on a primetime news broadcast.

Palestinian reports indicated that the special unit’s operations were part of a longer, broader operation. For that purpose, the unit rented a building and a yard in the Gaza Strip from a Palestinian police officer who did not know with whom he was dealing. Members of the special unit told the officer that they were running a humanitarian aid organization that specializes in distributing food to the needy in Gaza.

“For this purpose, the unit operated undercover as Palestinians from the Gaza Strip to distribute aid and managed to get into the homes of Hamas members. According to the [Hamas] reports, some of which appeared on social networks, the special unit successfully planted [technologically] advanced devices to collect signals intelligence in sensitive locations such as entrances to tunnels, rocket launching sites, and the homes of senior Hamas members.

“If the details are true, this behavior could be considered a blatant violation of international humanitarian law, which says that it is forbidden to use symbols of humanitarian organizations for military activity,” said attorney and human rights activist Eitay Mack.

“It could endanger those who actually operate in these organizations,” Mack added. The Israeli army has effectively justified any paranoia or suspicions Hamas and others might have of humanitarian groups.

This is already happening, according to Ya’ari’s report, which detailed Hamas’ confusion following the incident. After the covert Israeli operation was exposed, Hamas security forces reportedly erected checkpoints and carried out arrests in Gaza.

“Hamas said, wait a second. Israel had a base inside Gaza with people, equipment, a Mercedes truck, a Volkswagen car, weapons? What happened here? How long was this going on? Are there other similar things happening?” Yaari speculated.

When Israeli security forces suspect Palestinian or foreign humanitarian workers are collaborating with Hamas, the Israeli press accuses the Islamic movement of “cynically exploiting” the protections and privileges given to humanitarian groups, even when many of those accusations eventually turn out to be baseless. 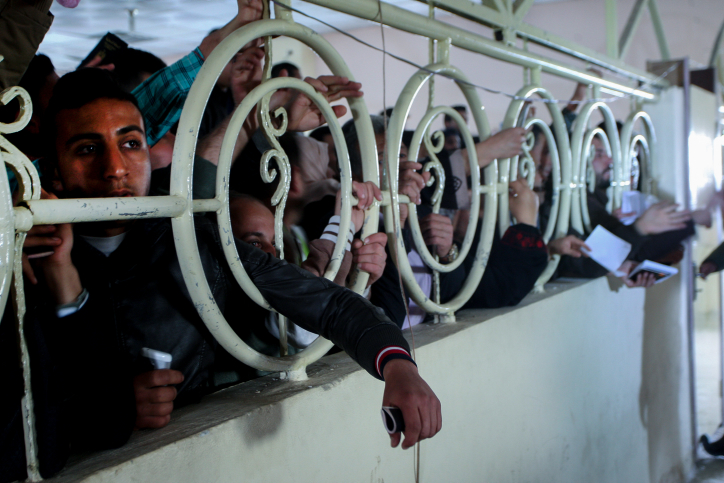 Palestinians wait to cross into Egypt through the Rafah border crossing in the southern Gaza Strip after it was opened by Egyptian authorities for humanitarian cases, February 7, 2017. (Abed Rahim Khatib/Flash90)

But instead of asking why the Israeli army does the same, instead of explaining to the viewers at home the real meaning of impersonating humanitarian aid workers, instead of asking how it is even possible for Israeli forces to operate deep inside the strip over a decade after “Israel left Gaza,” the media just moves on to the next news item. In the Israeli media, the IDF spokesperson and censor, respectively, decide what reporters report.

A look at what the Israeli media said it the wake of the botched operation and after Hamas started leaking details of it indicates that most journalists published exactly what the Israeli military spokespeople expected.

The Israeli army censor’s attempt to keep this story under wraps was not really about trying to prevent damaging information from reaching hostile elements in Gaza. Its main purpose was to conceal vital information from Israeli citizens. After all, the details revealed by Hamas had already been published by news outlets and on social media around the world. Photos supposedly identifying the Israeli operatives are out there for anyone to find. The entire world knew of the name of the Israeli officer who was killed while the Israeli media was forced to refer to him only as “M.”

Once again, the people kept under the dark cloud of censorship are Israeli citizens. And Israeli journalists are playing along.