The three most important ministers in the Israeli cabinet – Foreign Minister Lieberman, Defense Minister Barak and Prime Minister Netanyahu – didn’t bother to attend the deciding vote on the boycott bill 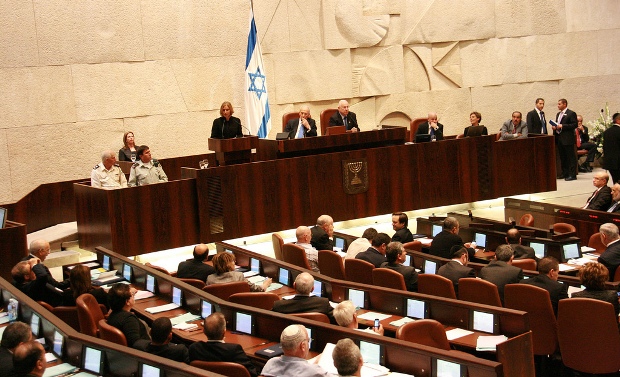 The anti-boycott law, perhaps the most important piece of legislation to come out of the Israeli parliament in recent years, passed with a 47-38 majority. This is how the Knesset members voted, followed by a few notes:

(*) The custom in the Knesset is that opposition and coalition members who cannot attend a vote can agree to essentially cancel each other out. In major votes, parties tend to limit mutual cancellations as much as possible; therefore it is not always clear whether a Knesset member who didn’t come to the vote was cancelled out or chose to be absent for other reasons.

(**) Many of the votes were those of backbenchers, and it seems that the leading ministers preferred not to be present at the vote, once it was clear that the law was going to pass. The three most important ministers in the government–Prime Minister Netanyahu, Defense Minister Ehud Barak and Foreign Minister Avigdor Lieberman—chose not to attend the vote. Some leadership Israel has.

(***) The entire Ha’atzmaut faction, until recently a part of the dovish Labor party, chose not to oppose the boycott law nor to support it.

(***) Officially, the extreme-right Ihud Leumi party is not part of the government, but it supports much of its policies and all rightwing legislation in the Knesset.

Update: in response to a reader’s question (see first comment), an MK who appears as “not present” wasn’t at the assembly during the vote. “Didn’t vote” simply means abstained. As you can see, Knesset members prefer not to be seen on TV refraining from voting, so unless they really have to (like in the case of the Knesset’s speaker), they simply disappear when an unpleasant vote approaches.
As for the photo above, it’s not a picture from the current debate, but from the opening of the Winter assembly, hence the presence of the IDF chief of staff.
Update II: In response to more comments – almost all pieces of legislation don’t require “an absolute majority” of 61 members. Still, if the coalition needed it, there would have been no problem to get 61 hands for this vote.
Aryeh: I regret to say I that don’t share your (limited) optimism. I tend to think that this vote was seen as a very major one – with a long filibuster and 87 members present (normally only 30-40 come to vote), from all the house’s parties. Plus, two MKs were too ill to vote; one had buried his mom on Monday, and most important, I think that the members who failed to show up did it on purpose. We know of two Kadima members who supported the bill (Schneller and Shamalov-Berkovich) and will be “punished” by their party today; several Likud MK opposed the law: House Speaker Rivlin, Minister Meridor and probably Eithan. One surprise came from Benni Begin, the son of the legendary Likud leader, who used to be considered a defender of personal liberties, and voted Yes. And there is, of coarse, Ehud Barak’s party, who fled the battleground. We should remember that this was a government-backed bill, so any party that would have voted against the law was signaling its desire to leave the coalition – yet I believe that had Barak taken a stand, Neatnyahu would have thought twice before approving this particular piece of legislation. In that sense, Barak’s absence is somewhat of a support.
Get Our Weekly Newsletter