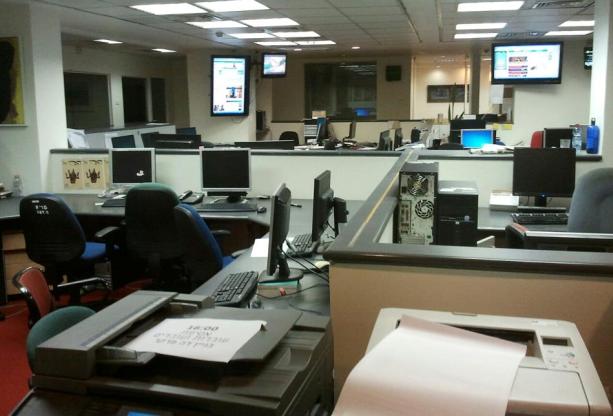 Empty news desk at Haaretz, October 3rd, 2012. Journalists have declared a general strike, as well as all of Haaretz Group’s internet sites, to protest the planned layoff of 20 percent of the workers.

Haaretz’s journalists decided this afternoon to cancel the printing of the newspaper tomorrow, for both the Hebrew and the English editions. The internet sites of Haaretz Group (Haaretz.co.il, Haaretz.com and TheMarker.com) have not been updated since the early afternoon. UPDATE: The sites will go back to work at midnight local time.

Workers at Haaretz are protesting massive layoffs that are to be implemented right after the Jewish holidays. The journalists recently unionized, and held a two-hour protest several weeks ago.

Since then, negotiations between the union and the paper’s publisher, Amos Schocken, have failed. This afternoon, a strike was announced, effective immediately.

The journalists’ union posted this message on its Facebook page:

Forty minutes ago, at the end of an emotional workers’ assembly, the journalists of Haaretz decided on a general strike, meaning that none of us would work on the paper until tomorrow, Thursday, so we can assume it will not be printed. We call upon readers of Haaretz and the general public to continue supporting us in our struggle against the planned layoff of 20 percent of the workers.

According to journalists who took part in the meeting, some of Haaretz’s veteran journalists tried to prevent the strike, claiming that it would not be effective in stopping the layoffs and would only increase the paper’s mounting financial troubles. But in the end, more than  half the votes (128 out of about 230) were in favor of the strike.

Earlier today, Haaretz’s publisher Amos Schocken attacked the union. In a letter to all of Haaretz’s workers, Schocken wrote that the paper faces an “immediate” threat to its existence. “If Haaretz is to be shut down, I would rather shut it down now, and not in several months, like Maariv,” said Schoken, referring to the troubles of another Israeli daily. 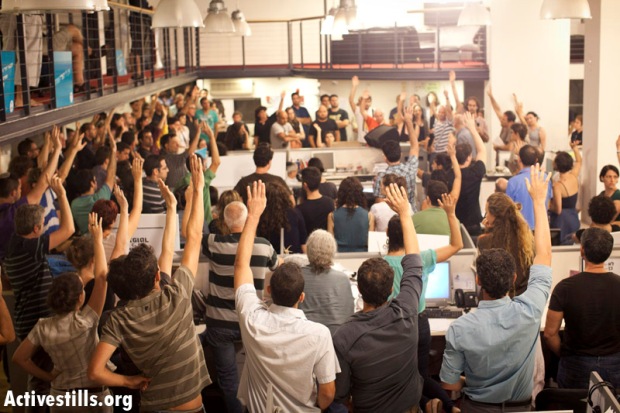 Established in 1918, Haaretz is Israel’s oldest daily. In recent years, it ranked fourth in circulation, after Israel Hayom, Yedioth Ahronoth and Maariv. Several weeks ago, Haaretz journalists declared a “labor dispute” –  the legal measure required in Israel before declaring a strike.

Maariv, whose fate is also unclear, is operated by the court these days, following a plan to lay off all its 1,750 employees and sell the brand to right-wing publisher Shlomo Ben-Zvi. Once Israel’s most widely read paper, Maariv is no longer able to pay salaries to its workers, not even the severance pay they are entitled to under Israeli labor laws. (Read more on the troubles of Maariv in this piece I published today at Open Zion.)

One of the main reasons for the fall of Maariv is the rise of Israel Hayom, printed and distributed for free at considerable loss by American billionaire Sheldon Adelson. Maariv employees held a protest today in front of the prime minister’s residence in Jerusalem, demanding that he help prevent the collapse of the print media.

In 1978, Haaretz journalists sent their paper to print with empty front pages, in protest of a move to individual contracts. (Haaretz’s former editor-in-chief, Dov Alfon, posted a picture of those pages on his Facebook wall.)