Update: As of Sunday morning, Moshe Silman was reportedly fighting for his life, with burns on more than 90 percent of his body. According to Ynet, in the weekly cabineet meeting, Prime Minister Benjamin Netanyahu called the act a “great personal tragedy” and said that he asked welfare and housing officials to look into the case. This Haaretz report details a decade-long struggle against a  “bureaucratic nightmare” that prompted the act, and a solidarity protest was scheduled to take place in Tel Aviv Sunday night.

An Israeli man was rushed to the hospital this evening (Saturday) after he set himself on fire at the end of a march calling for social justice in central Tel Aviv.

According to police estimates, some 10,000 people marched, marking the first anniversary of the J14 movement’s inception. After an otherwise uneventful march that culminated on Kaplan St., a man in his 50s distributed several copies of a typed letter, poured gasoline on himself, and torched his clothing.

Those present on the scene succeeded in extinguishing the fire before ambulances arrived and rushed him to nearby Ichilov Hospital. He was photographed eating a popsicle before being whisked away, though later reports described his condition as serious. He was later moved to the larger Tel Hashomer Hospital. 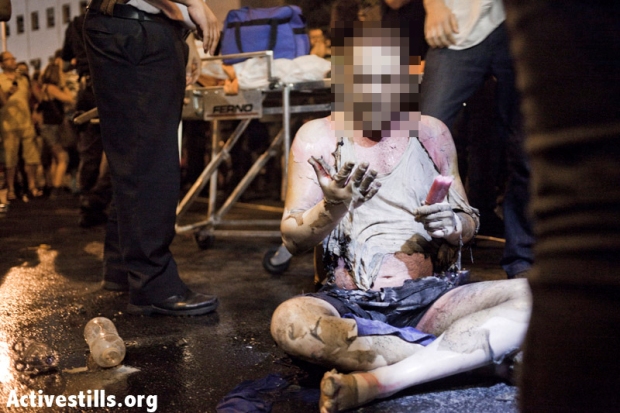 The letter he distributed details his financial, housing and health difficulties, along with his anger at the state “for the humiliation that disenfranchised citizens go through day in and day out, that take from the poor and give to the rich.” A 2008 account on the Israeli financial site “Economist” surfaced online following the incident, and appears to detail some of his troubles: according to the text, the man sued the National Insurance Institute after it seized his five trucks, which he used to run a delivery company, over a NIS 5,000 debt. The result, he claimed in the suit, was the collapse of his business and ultimate financial ruin.

The translation of the suicide letter is below; the spacing reflects the original. Scroll further down for more images and a short video depicting the incident and its aftermath. We’ll continue to post updates as they emerge.

The State of Israel has stolen from me and robbed me, left me with nothing

It won’t even assist me with my rental fees

Two committees from the Ministry of Housing have rejected me, despite the fact that I have undergone a stroke and was granted 100% work disability

I blame the State of Israel

those that serve the State of Israel

The Haifa National Insurance Institute branch, who abused me for a year until I was granted disability

I have no money for medicine or rent. I can’t make the money after I have paid my millions in taxes I did the army, and until age 46 I did reserve duty

I refuse to be homeless, this is why i am protesting

Against all the injustices done to me by the State, me and others like me 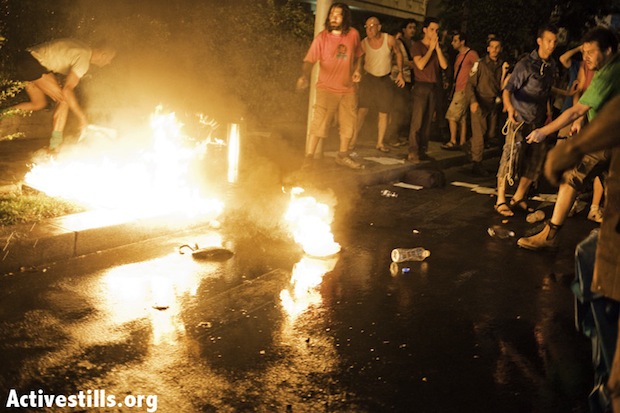 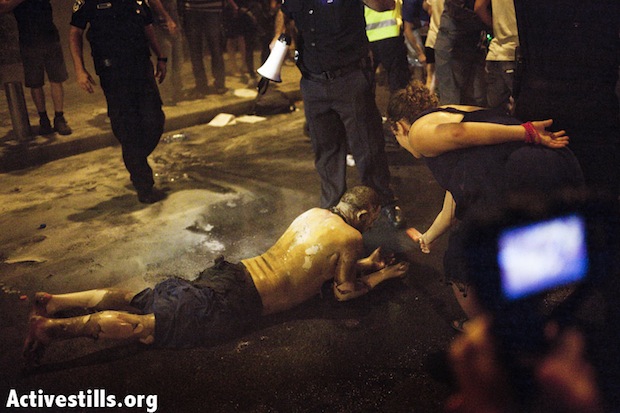 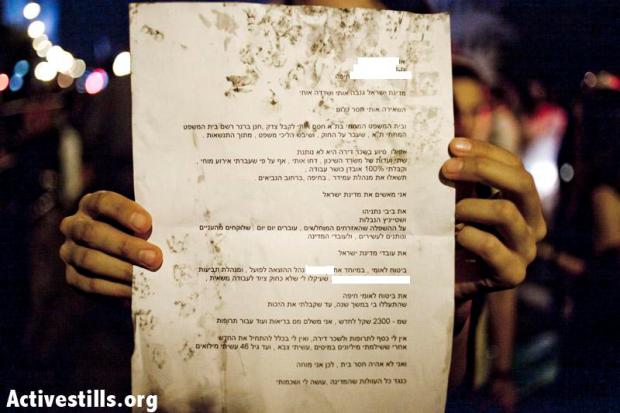