Tom MacMaster, of Istanbul, Turkey, has just come out as the author behind A Gay Girl in Damascus. MacMaster was flushed out by Ali Abunimah and Benjamin Doherty.  Here is his message in full:

I never expected this level of attention. While the narrative voıce may have been fictional, the facts on thıs blog are true and not mısleading as to the situation on the ground. I do not believe that I have harmed anyone — I feel that I have created an important voice for issues that I feel strongly about.

I only hope that people pay as much attention to the people of the Middle East and their struggles in thıs year of revolutions. The events there are beıng shaped by the people living them on a daily basis. I have only tried to illuminate them for a western audience.

This experience has sadly only confirmed my feelings regarding the often superficial coverage of the Middle East and the pervasiveness of new forms of liberal Orientalism.

However, I have been deeply touched by the reactions of readers.

The sole author of all posts on this blog

I think for me, the overwhelming sense is that of relief: That there isn’t an articulate young woman named Amina Arraf being tormented by the Assad regime. MacMaster wasted the time, sleep hours and emotions of many people who grew deeply attached to the character he so convincingly created; some also feel he damaged the credibility of Syrian activists, although I don’t think that anything MacMaster did will ever narrow the gap of credibility between the activists and the completely discredited, disbelieved Assad regime. The apology post is bizarre in many a way, not least for its jab at liberal Orientalism – made by a white Western man deceiving the world to think he was a gay Arab woman. But much as many readers may feel outraged by MacMaster’s hoax, I find still thinking that “Amina’s” disapperance reignited the fading interest in the Syrian regime’s butchery of its own people, which has become to many news consumers a routine. Here’s to hoping the end of this butchery is in sight.

And finally, here’s a big tip of the hat to Abunimah and Doherty. I was rarely more relieved to have my doubts about a story resolved as quickly. 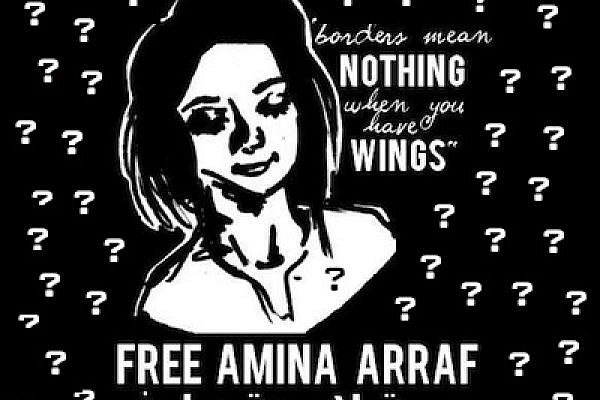 Could Damascus blogger be a married couple from Edinburgh?
The Electronic Intifada’s Ali Abunimah and Benjamin Doherty may have come as close as anyone to uncovering the real identities of “A Gay Girl in Damascus.” Having crisscrossed the information, they are now certain beyond doubt that the blog was a hoax, and that behind it wasn’t a gay Syrian woman named “Amina Arraf”, but…
By Dimi Reider June 12, 2011 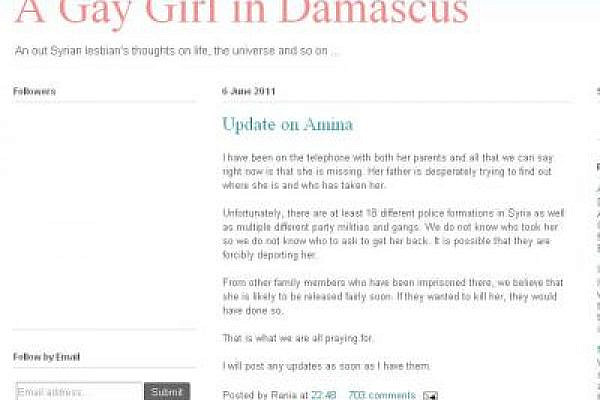 A Gay Girl in… Edinburgh?
As days go by, more and more details emerge on the backstage workings of the Gay Girl in Damascus blog, the author of which was ostensibly “disappeared” in Damascus last week.  The website Lezgetreal, which played a key role in the establishment and early fame of the blog, published the two IP addresses from which…
By Dimi Reider June 11, 2011

Gay? Girl? Damascus? Plot thickens around Syrian blogger
On Monday, this blog was one of the first to spread the world of the abduction of Syrian blogger Amina Abdallah Arraf, author of A Gay Girl in Damascus. A post on AGGID, purportedly written by Arraf’s cousin Rania Ismail, reported that two men bundled Amina into a car with a pro-regime sticker. A few hours…
By Dimi Reider June 9, 2011