Palestinian prisoner Muhammad Allan, who has been on hunger strike for two months, fell into a coma Friday morning and was placed on a respirator after his health significantly deteriorated overnight. 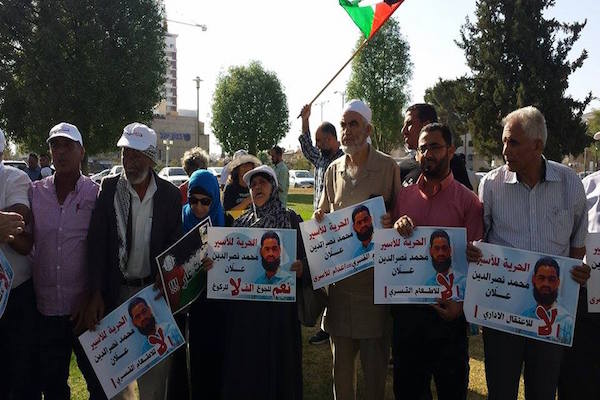 Palestinian prisoner Muhammad Allan, who has been on hunger strike for 60 days, fell into a coma Friday morning and was placed on a respirator after his health significantly deteriorated overnight, the Palestinian Prisoner’s Society said.

Israel has said that it may use the controversial practice of force-feeding if his death appears to be imminent, though Allan is reported to be in stable condition.

Allan, 31, allegedly a member of Islamic Jihad, had refused any medical treatment, vitamins or minerals but had been drinking water. He received fluids in the hospital since losing consciousness, though it was not clear what kind.

“The condition of Mohammed Allan deteriorated this morning. He is receiving treatment and his condition is stable. The treatment is being administered according to the ethics committee guidelines and includes respiration and intravenous fluids and saline,” said a spokesperson for Barzilai hospital in Askelon, Israel in a statement.

“Despite his very fragile and critical situation, the Israeli Prison Service still insists to keep Mr. Allan shackled by foot and arm to what could potentially become his deathbed in a very inhumane treatment and gesture,” read an appeal issued yesterday by the Palestinian Human Rights Organizations Council, the Arab Association for Human Rights, Adalah and Physicians for Human Rights in an attempt to urge Israel to free Allan in order to save his life. The Israeli Prisoners Service denied the request.

Mohammad Allan is an attorney from Einabus, a village south of Nablus. He has been held under administrative detention, without trial or known charges, since his arrest in November.

He is hospitalized at the Barzilai Medical Center in Ashkelon, where Palestinian media sources say he suffered a seizure last night. He was transferred to Ashkelon from the intensive care unit at Soroka Hospital in Beersheva, where doctors refused to force feed him.

According to his lawyer, Allan has been on hunger strike at least 60 days in protest of administrative detention.

Last month, the Israeli Knesset legalized the procedure of force feeding if the prisoners’ life is in danger, sparking outrage among human rights workers and the Israeli medical community who define the practice as a form of torture.

A week after the law was passed, Israeli authorities announced that Allan may be force-fed if his health continued to deteriorate to the point in which his life was in danger.

The Israeli Medical Association said that the medical community would “continue to act according to medical ethics, which prohibit doctors from participating in torturing prisoners.”

This story is developing.