The founder of IDF watchdog group Breaking the Silence (BTS), Yehuda Shaul, was detained in Hebron on Tuesday as he was leading a tour in the Jewish settlement located in the heart of the city.

According to the organization’s spokesperson, Avner Gvaryahu, Shaul was confronted by an IDF company commander, who prevented him from continuing on his way, despite the fact that the area is considered public space and that Jewish groups use those streets frequently. Shaul was detained after arguing with the officer.

Shaul, who was released from the Hebron police station later that night, was banned from the area for 14 days, which means he will not be able to lead tours in the city. Breaking the Silence is planning a tour for 250 people in the city on Friday. 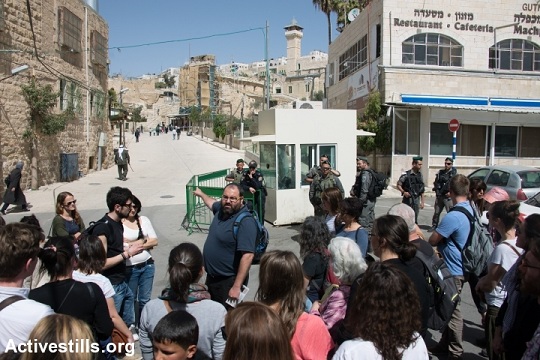 Yahuda Shaul of Breaking the Silence leading a tour in Hebron (photo: Activestills.org)

Breaking the Silence, which holds frequent tours both in the city as well and in the south Hebron Hills, was formed by former IDF soldiers and officers who served in the occupied territories. The organization aims to shed light on the army’s operations in the West Bank, and especially on human rights violations.

Hebron is the only city in which a population of several hundred settlers live among an occupied population, surrounded by heavy army presence. Shaul himself served in Hebron and is considered an expert on issues regarding the military control of the city.

Recently, BTS workers have complained that both the authorities and settlers have joined forces in an attempt to prevent them from leading tours in Hebron. According to Gvaryahu, both the tours that were cancelled, as well as the orders banning BTS workers from entering the city, were issued “on strange and unfounded claims.”

“A month ago, the police prevented one of our tours from entering the city due to ‘special security alerts.’ At the same time, we saw convoys of settlers and their guests coming.”

Hebron is the largest Palestinian city in the West Bank. The presence of a large number of settlers and soldiers in the city has changed parts of it dramatically over the last 20 years. Some streets are only accessible to Jews, while Palestinians shops and apartments are abandoned and the old market remains closed.

“Breaking the Silence was started by 65 soldiers and officers that served for months in Hebron,” said Gvaryahu. “This is where it all began for us. The city is a microcosm of the occupation. It is where it manifests itself most clearly. You see the shops closed, the empty streets. You can’t stay indifferent to it, and this is why they [the authorities] want as few outsiders as possible exposed to these sights.”

The IDF Spokesperson’s Unit provided the following comment: “IDF does’t object to BTS tours or activities. Only a month ago, there was a tour to the city that included the entrance of several buses, which was done in coordination with the security forces in the area. Regarding the specific event described here, it was Yehuda Shaul who blocked the way of the commander’s jeep that led to his arrest.”

Related:
Former Israeli AG: We should have evicted Hebron settlers
Breaking the Silence: the occupation testimonies (part I)
In Hebron, terror begets a reign of terror