Amid the Gaza war this summer, Palestinian store owners in the West Bank began removing Israeli products from their shelves. The campaign also aims to educate Palestinian consumers to buy local.

By Yael Marom and Jessica Devaney 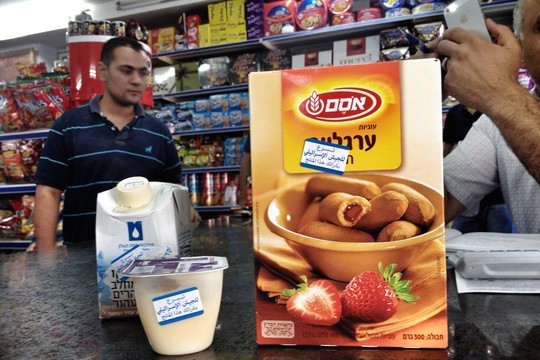 The call for boycotting Israeli products and services has been gaining momentum across the West Bank in recent weeks. Large sections of store shelves have been emptied of products supplied by Israeli companies. At least 70 stores have already joined the campaign since its launch in Jenin, and store owners in cities such as Hebron, Nablus, Ramallah, Bethlehem and other towns and villages throughout the West Bank and East Jerusalem have responded to the call.

In the wake of the violence in Gaza this summer, public support for this nonviolent tactic is growing. Volunteers in cities and villages across the West Bank are working with grocery store owners to place stickers on Israeli products, declaring: “Buying this product supports the Israeli military.” Other stickers label products with “16%” noting the Israeli-regulated value added tax, which in many ways favors the Israeli economy. 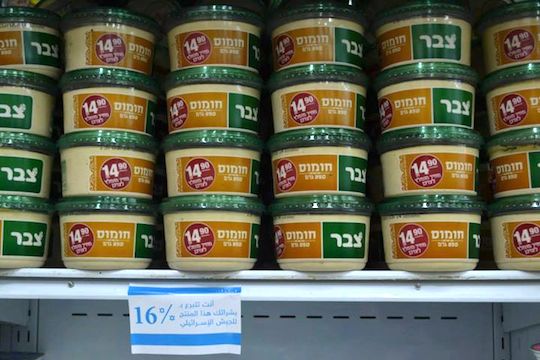 The campaign, initiated by a coalition of organizations and activists, has a dual purpose: one is to exert pressure on the Israeli economy and Israeli business owners, who profit amply from the captive market of Palestinian buying power. The second declared objective is to strengthen the local Palestinian economy, including businesses, agriculture and factories and to create more jobs for Palestinians.

A website launched under the title “Alternative Palestinian Products,” enables shoppers to find Palestinian alternatives to the Israeli-made products they are used to buying.

Nasser, who runs two mid-sized grocery stores in Ramallah, says that customers are starting to avoid Israeli products – and not just those from settlements. Since the assault on Gaza reached such devastating proportions, he says, “many people feel the only thing they can do to support the Palestinians in Gaza is either donate or boycott Israeli products.” He hopes the popular support for the boycott campaign continues to grow, but he is afraid if that does not happen he will lose customers to stores that have not joined the boycott.

Nasser thinks the Israeli distributors are already beginning to feel the “boycott pinch.” The distributor who delivers Israeli dairy products insisted on replacing the milk remaining on his shelves with fresh milk free of charge, hoping to attract customers. Nasser rejected the offer. 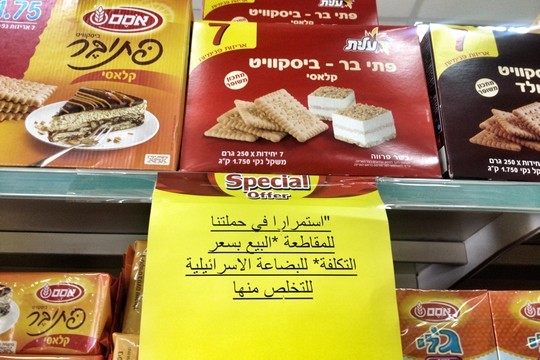 A sign near the entrance of a grocery store in Ramallah: “As part of our participation in the boycott campaign of Israeli goods we are selling these products at cost in order to get them off of our shelves.” (Photo by Jessica Devaney/Just Vision)

Bravo had a few prominent displays of remaining Israeli goods at the entrance of one store, highlighted by a bright yellow sign reading: “Special Offer: In our campaign to boycott Israeli products, we are selling these items at cost in order to get them off the shelves.” However, numerous Israeli products remained on the store’s shelves. Like in other shops, volunteers placed blue and white stickers identifying the Israeli products. In several cases throughout Bravo, these stickers were torn off or obscured.

One skeptical shopper reflected: “maybe Bravo’s big public announcement was an opportunity to capitalize on the growing support for BDS and draw in customers.” It will take some time to see if the boycott gains momentum, she added.

Jessica Devaney is a documentary film producer and the director of communications at Just Vision. Yael Marom is Just Vision’s public engagement manager and a co-editor of Local Call, where this article was originally published in Hebrew.