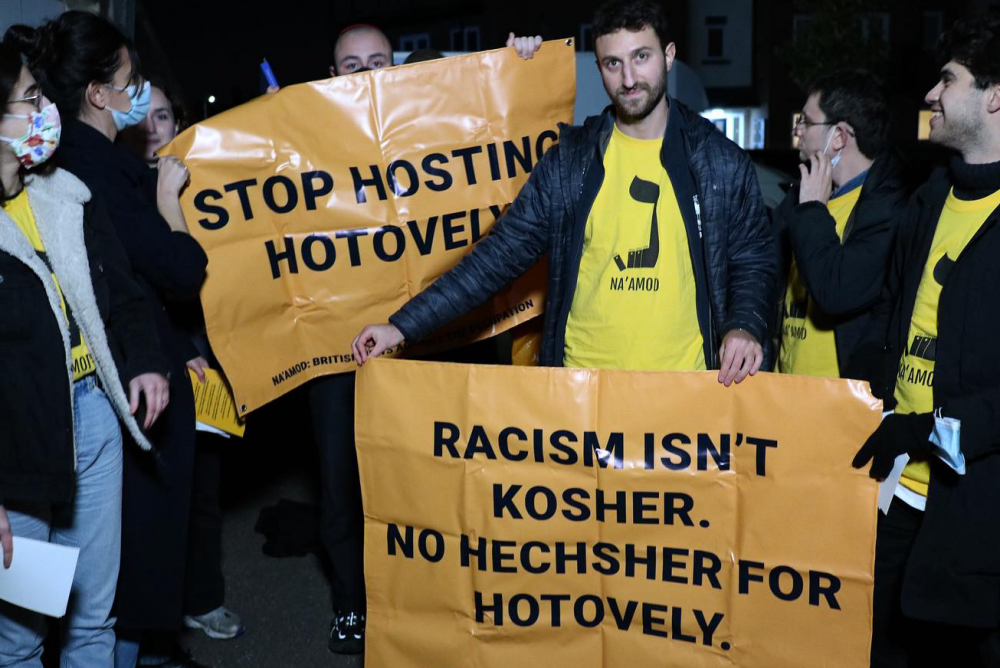 British-Jewish activists staged a walkout at a Zionist Federation event at a London synagogue on Thursday, held to mark Israeli Ambassador to the U.K. Tzipi Hotovely’s first year in the job.

The activists, members of Na’amod: British Jews Against Occupation, disrupted the event shortly after it began, raising banners which read “Racism isn’t kosher” and “No hechsher [kosher stamp] for Hotovely.” (Full disclosure: the author of this piece is a member of Na’amod.) After, they gathered outside the venue and handed out flyers to attendees as they left the event, highlighting Hotovely’s most racist comments during her time as ambassador and prior to her appointment — including calling the Nakba an “Arab lie.”

“Hotovely’s disgusting views and actions have no place within our community,” said Cloe Fernandez Barnes, one of the activists who participated in the walkout. “They contradict our values, particularly those of love and justice found at the heart of Jewish texts… We must stop platforming racists if we want freedom for all in Israel and Palestine.”

Hotovely’s record in Israeli politics, in addition to statements she’s made since becoming ambassador, have put her in conflict with the progressive section of Britain’s Jewish community. In June 2020, immediately after news broke that then-Prime Minister Benjamin Netanyahu was set to appoint Hotovely (then Minister of Settlement Affairs) as ambassador to the U.K., Na’amod launched a petition calling on the British government to reject her appointment. The petition, which caused a stir within the community and reached almost 2,000 signatures, cited Brazil’s rejection of settler leader Dani Dayan (appointed as ambassador to Brazil in 2015) as precedent for such a move.

Pushback against Hotovely during her first year in the job has not been limited to the far-left of Britain’s Jewish community. After Hotovely’s “Arab lie” remark last December, the former Senior Rabbi to Reform Judaism, Laura Janner-Klausner, stated: “My assumption was that when she became ambassador, she would become ambassadorial. You put your own views to the side and say, ‘I’m here to represent the State of Israel.’ It is already clear that she does not do that job. She is therefore mismatched to the role of ambassador to Britain.” The Abraham Initiatives U.K., a charity supporting shared society initiatives in Israel, also strongly condemned Hotovely’s comments as a denial of historical fact.

Hotovely’s hardline credentials — she is staunchly opposed to the two-state solution, and advocates for formally extending Israeli sovereignty over the West Bank without offering full citizenship rights to Palestinians — have been burnished by her embrace of far-right groups. In 2011, Hotovely drew controversy when she invited the Jewish supremacist organization Lehava, which has been consistently responsible for anti-Palestinian violence in Jerusalem, to the Knesset as part of a discussion on preventing romantic relationships between Jews and Arabs. 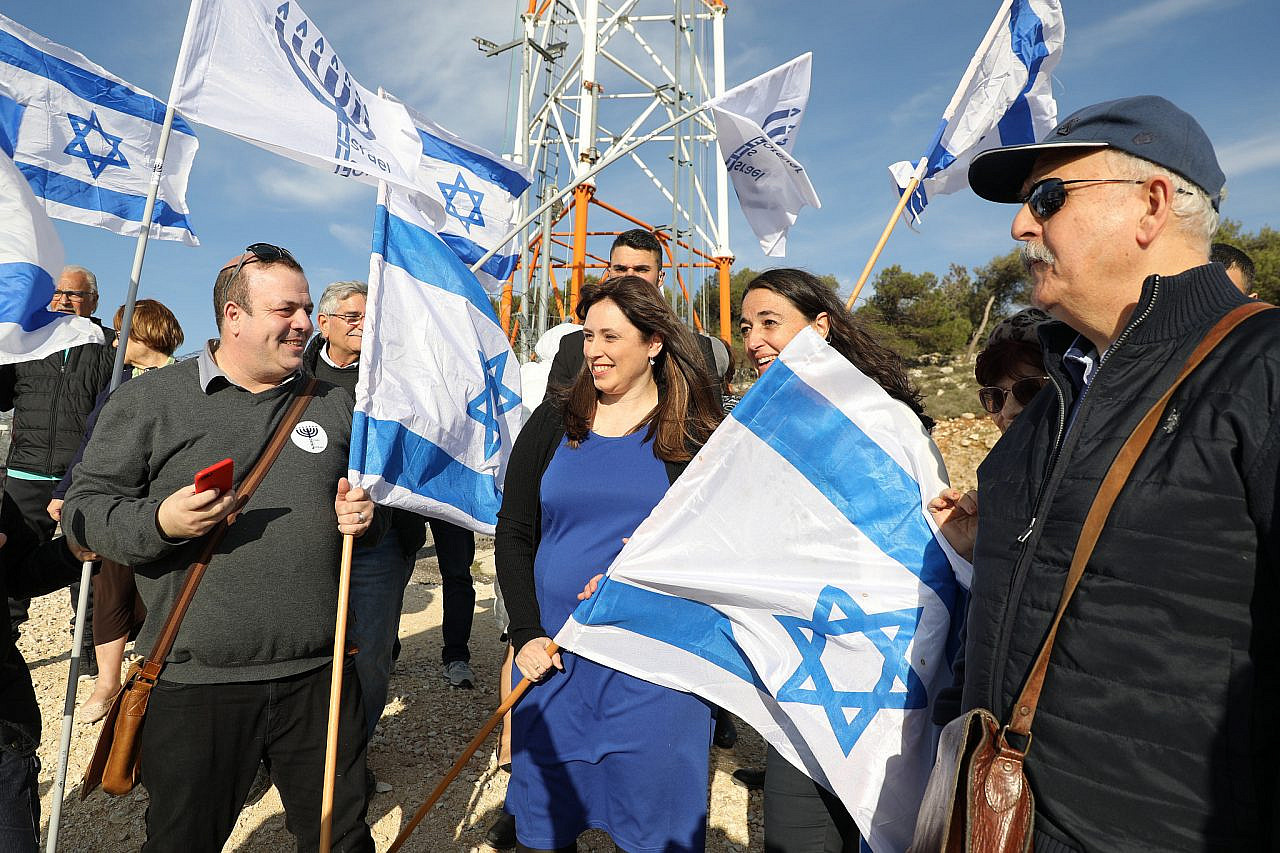 She has also been an informal ally to Regavim, a settler outfit that focuses on suing to evict West Bank Palestinians from their land while preventing the removal of illegal settler outposts. In December of 2019, Na’amod blockaded the entrance to an event featuring Regavim in London which was hosted by UK Lawyers for Israel — whose director led the conversation with Hotovely at Thursday’s event.

Since Hotovely’s arrival in the U.K., Na’amod has been calling on British Jewish leadership bodies not to give her a platform — especially in light of commitments many of these bodies made to an anti-racist agenda in the wake of the transnational Black Lives Matter protest wave of 2020. Although each of the major Jewish denominations in Britain has hosted Hotovely in her role as ambassador (largely on Zoom, given Covid-19 restrictions), these events have not gone unchallenged.

The decision of Liberal Judaism’s leadership to host an event with Hotovely in April triggered the resignation of the chair of the movement’s Black Jews and Jews of Colour Action Group, Omar Portillo. Portillo, whose protest was bolstered by an open letter signed by over 30 members of Liberal synagogues, argued that “[h]osting and providing Tzipi Hotovely a platform is not consistent with the anti-racist values that I understand Liberal Judaism to hold.”

Also in April, Noam, the youth movement of Masorti (Conservative) Judaism, publicly challenged their parent movement’s decision to host the ambassador, organizing a simultaneous “counter-event” which featured Israeli and Palestinian anti-occupation activists. They explained their opposition to Masorti’s event not only as a rejection of Hotovely’s political views, but also of the disdain that she has shown in the past for non-Orthodox streams of Judaism: “We do not want to listen to and applaud a woman who has denigrated our Judaism, saying we have ‘decided to take the shell and name of Judaism, all of the customs and tradition and to empty the meaning from them,’” Noam said in a statement. “To reward her with a platform after these hurtful comments is a deep humiliation for our community.”

In response to Masorti and Liberal Judaism hosting Hotovely online in April, Na’amod covered bus stops and lamp posts outside of those movements’ headquarters with stickers which, like the banners in Thursday’s action, read “Racism isn’t Kosher” and “No Hechsher for Hotovely.”

Now that in-person programming has resumed in the British-Jewish community, activists are making it clear that they are ready to carry out further disruptive actions until communal organizations stop giving Hotovely a platform.

“Our message to our community is that we will not stay silent when organisations host racist figures like Hotovely,” said Tommer Spence, another activist who participated in the action. “Our community has been particularly sensitive over recent years to people who claim to oppose racism while maintaining a blind spot for antisemitism. We must not act in the same way towards Palestinians.”