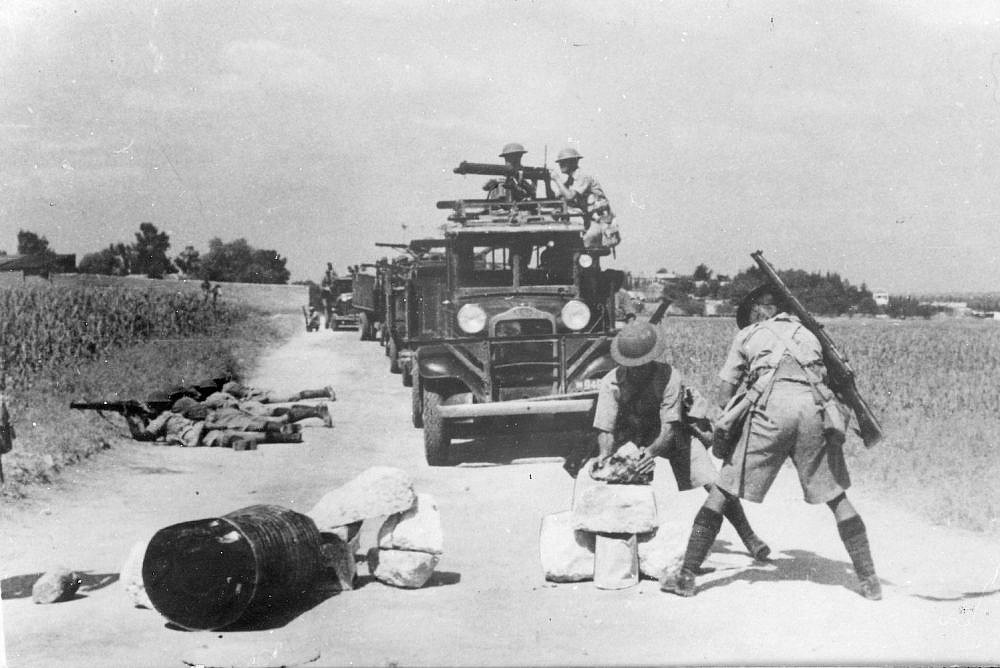 The past year has seen countless headlines in Israel and abroad referring to the doctrine of “shrinking the conflict” — especially since the election of one of its strongest proponents, Naftali Bennett. The idea, which is based on the writing of Micah Goodman (himself a resident of the West Bank settlement of Kfar Adumim), is that the Israeli-Palestinian conflict cannot be resolved and should therefore be managed more effectively. Under the stated goals of improving Palestinians’ quality of life and maximizing the economic efficiency of the occupation, this strategy proposes to establish separate regimes of movement for Israelis and Palestinians in an attempt to minimize Palestinian resistance to the occupation.

Various academic studies indicate that over the last two decades, limiting Palestinian movement has become a major part of the day-to-day management of the Israeli occupation. The settlers themselves are well aware of this: for example, the real estate company “Lev Hahar Yazamut,” which markets homes in Israeli settlements in the occupied West Bank, recently launched a campaign entitled “The New Pioneers,” aimed at “families who see community and settlement as a top value, but would be happy to live in a spacious 197 square meters, 5 bedroom home.” The campaign included the imperative: “You shall not live in a settlement that lacks a bypass road leading to it.”

Goodman seems to be well acquainted with the issue. Building separate road networks for Israelis and Palestinians is at the heart of his eight-step plan to “shrink the conflict,” which he published in The Atlantic in 2019; the first step is titled “Keep It Flowing.” Imagining a hypothetical Palestinian living in Ramallah who seeks to visit his cousin in Nablus, Goodman describes the constant uncertainty and sense of humiliation caused by Israel’s control over Palestinian thoroughfares, which are opened and closed to Palestinians at the will of the Israeli military. 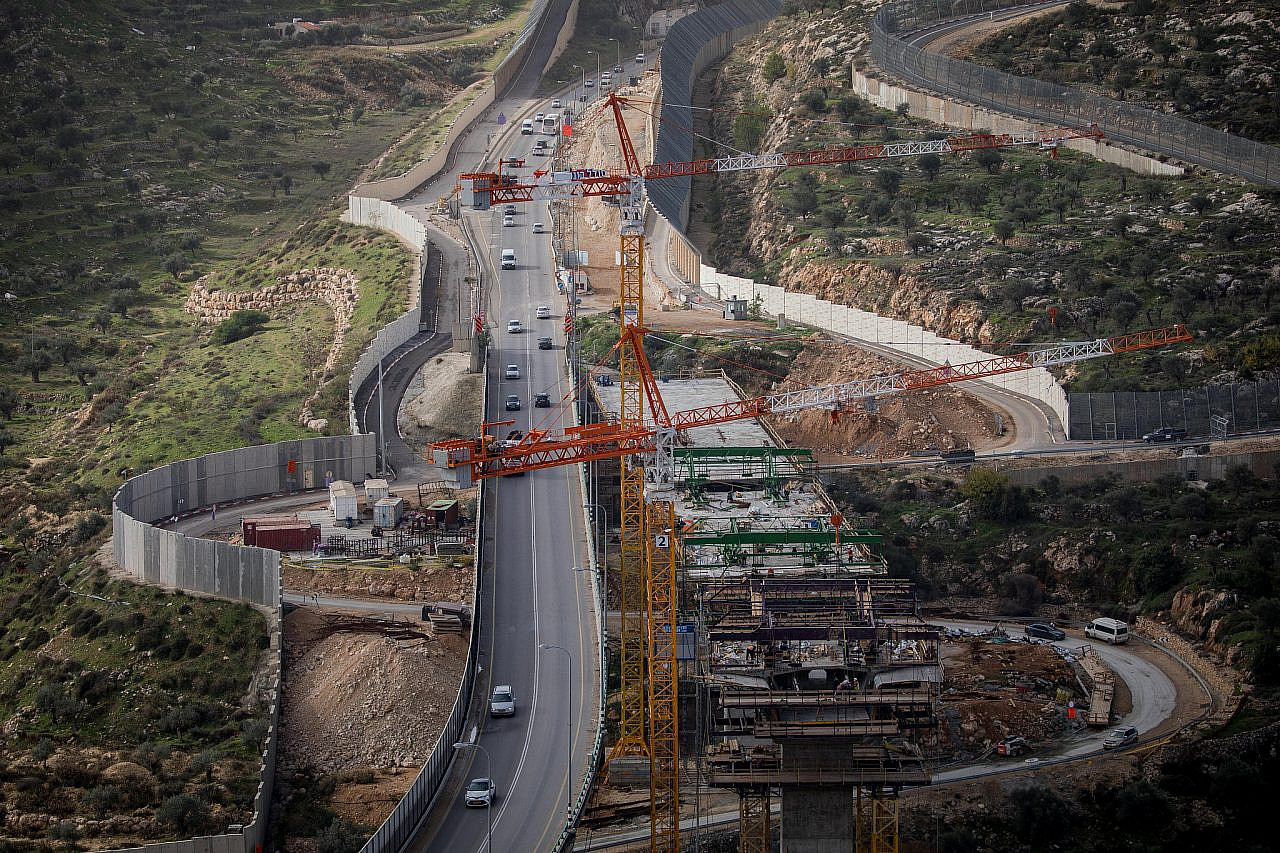 A general view of the construction work on the Tunnel Road, as seen from the Gilo settlement, December 15, 2020. (Yonatan Sindel/Flash90)

Goodman’s idea of using roadways to shrink the conflict may sound novel, but its origins can in fact be traced back to the ways in which the British Empire used the construction of civilian infrastructure to limit opposition in the colonies. Israeli historian Reviel Netz showed that the British first used transportation infrastructure as a weapon during the Boer War in South Africa. Three and a half decades later, the British Mandatory authorities implemented a similar initiative in Palestine, building bypass roads that were designed to circumvent the main routes controlled by Palestinian fighters. Rather than reducing the Zionist-Palestinian conflict, however, the initiative laid the foundation for its escalation.

During the Arab Revolt (1939-1936) that erupted against British colonialism and the continuation of Jewish settlement in Palestine, the British Empire adopted a strategy of paving a network of new roads throughout Palestine to bypass the traffic thoroughfares controlled by Arab fighters. The revolt, which was the largest anti-colonial revolt anywhere in the British Empire during the period between the world wars, included frequent attacks on British and Zionist vehicles as well as the blocking of major thoroughfares. The rebels’ central hub was located in the area between Tulkarem, Nablus, and Qalqilya, which the British referred to as the “terror triangle.”

The paralysis of transportation in this area had far-reaching consequences, because until the late 1930s there was only one main north-south road in Palestine — today known as Route 60 — which begins in Nazareth, passes through Jenin, Nablus, and Jerusalem, and ends in Be’er Sheva/Bir as-Saba’. As a result, paralyzing traffic on this road actually allowed the rebels to halt transportation across the entire country.

The British military’s need to bypass rebel strongholds became the central impetus for a major road paving initiative across Palestine during the second half of the 1930s — the biggest such campaign in the country’s history. The Military Roads Program saw the paving of 840 kilometers of road — about a third of all roads paved during the years of British control, which began in 1920 and ended in 1948 with the establishment of the State of Israel.

The main road that was paved to bypass Jenin and Tulkarm was the Jaffa-Haifa road, today known as Route 4. Its construction began as early as 1927 and progressed slowly over an entire decade — sometimes at a rate of only a few kilometers or even a few hundred meters a year — despite significant pressure from Jewish settlements and Zionist organizations which pushed to complete the paving. This was because Britain had already constructed a parallel railway line and was not eager to pave a road that would compete with its own railway and hurt revenues. With the outbreak of the revolt, however, the need for an alternative road grew urgent, and the British picked up the pace: the remaining 79 kilometers of road were completed by September 1937, with the last 25 kilometers paved in a record 45 days. 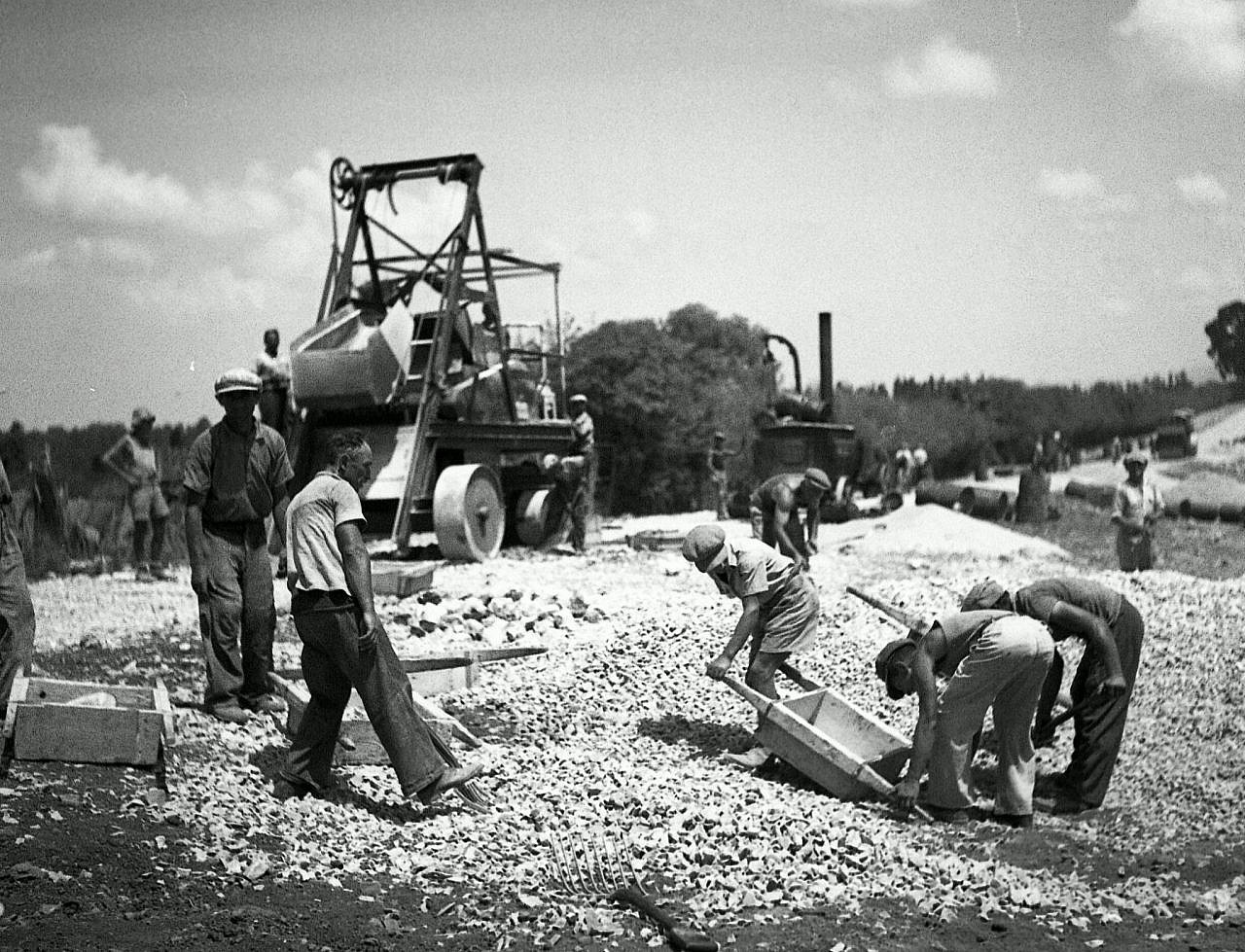 Paving the Jaffa-Haifa road in the 1930s. (Central Zionist Archives)

In retrospect, describing the Jaffa-Haifa road as a “bypass route” sounds a bit strange, particularly since a highway connecting two of the largest cities in the country seems both natural and desirable. But until the end of the 1930s, there were few Jewish settlements among the Palestinian villages along the coast of Palestine, which is likely why the British authorities viewed the area as nothing more than desolate swamps. In the eyes of the British, the significance of building such a road was to transport citrus fruits from orchards off the coastal plain to the port of Haifa for export; the authorities even went so far as to condition the paving of further roads on the expansion of citrus cultivation.

In addition to the Jaffa-Haifa road, the British paved a number of other important bypass roads from west to east, including the Hadera-Afula road, known today as the “Wadi ‘Ara Road,” and the Zichron Ya’akov-Yokneam road, known as the “Wadi Milk” Road.” The logic underlying these bypass roads was perfectly clear to the people of the time. For example, with the construction of the Wadi Ara Road, Davar, the newspaper associated with the Zionist Histadrut labor organization, wrote: “The new Hadera-Afula road will make it possible to cross the road between Samaria and the Jezreel valley without any need [to use] the Tulkarm and Jenin road. These central roads can promise normal traffic without the disturbances we experienced during the days of the violence.”

The network of roads that was paved throughout Palestine in the 1930s was not just an accumulation of smaller roads. Together, they created a critical mass that, for the first time, marked certain areas of the country as “Arab” or “Jewish,” and led to the designation of “Jewish roads” and “Arab roads,” as they were called during that period. The network also created, for the first time, a Jewish enclave along the coastal plain, within which one could travel without passing through a single Arab locality, thus laying the foundation for a separate Jewish territory in the country.

It is no coincidence that the construction of these roads was completed in 1937. That year, the Peel Commission, which was formed to investigate the reasons for the outbreak of the Arab uprising, published its recommendations, which included the abolition of the British Mandate and its replacement by two sovereign states — Arab and Jewish. It was the first time that a British official recommended the partition of Palestine. Why, exactly, was 1937 the year partition became a possibility?

The construction of the Jaffa-Haifa road, which was completed that year and was intended to serve as the central artery of the proposed Jewish state — along with roads that connected the Jewish settlements in the Jezreel Valley to the coastal plain — created for the first time a viable division between the eastern and the western parts of the country. This spatial separation allowed for continued Zionist settlement despite Palestinian resistance.

The Peel Commission’s proposal to partition the land, which flew in the face of the position held by the Arab Palestinian political leadership, did not resolve or quell the uprising. About two months after the publication of the Peel plan, the revolt resumed in full force, until it was put down in 1939 by the British army in cooperation with both the military and intelligence forces of the Haganah, the Zionist paramilitary organization. 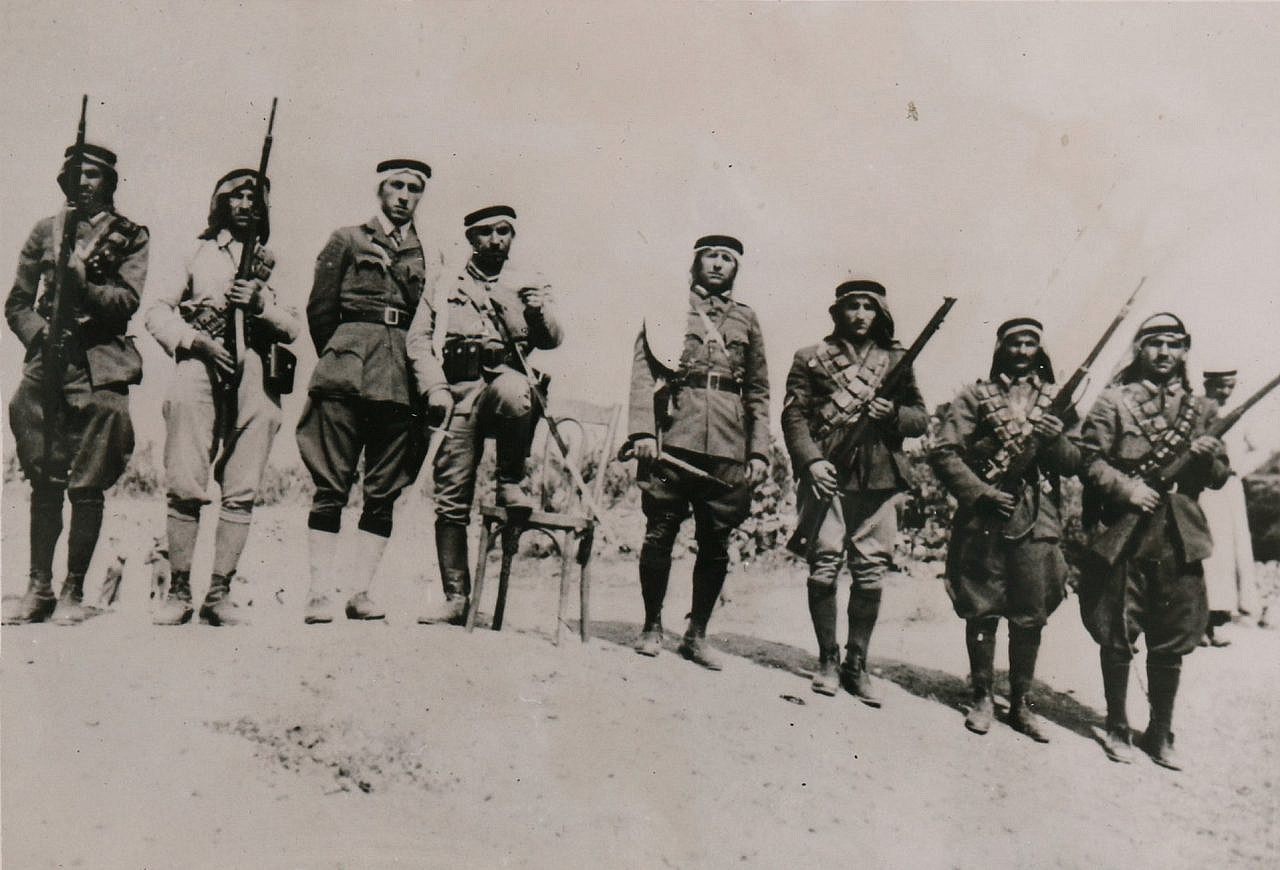 There are, of course, significant differences between the British military’s road paving plan and that of Goodman’s. While Britain has used infrastructure as a mere combat strategy, Goodman and his supporters say they want to improve the quality of life of Palestinians in the occupied territory by boosting their economy and reducing the humiliation they face at the hands of the occupation. In a recent interview, Prime Minister Naftali Bennett stated his support for the idea of “shrinking the conflict,” saying it will allow “more movement, more quality of life, more business, more industry.”

But the assumptions at the basis of Goodman and Bennett’s ideas are very similar to their historical source. First, both Goodman/Bennett’s plan and the British plan view Palestinians as an object to be managed rather than subjects to speak to directly. Second, they both seek to eliminate the struggle over this country by reframing it as an apolitical infrastructure issue, the actual result of which is spatial separation between Arabs and Jews. While this separation was an unintentional result of the road network paved by the British government, “shrinking the conflict” has turned it into the stated agenda of the current Israeli government, with the aim of perpetuating Israel’s control over the entirety of the land between the river and the sea.

Goodman’s idea, according to which “the solution [to occupation and resistance to that occupation] is neither strategic nor political, but infrastructural,” is in fact a failed imperial tactic that is over 100 years old. Palestinian opposition to Zionist settlement did not disappear back then, nor will it disappear today. At a time when human rights organizations are increasingly recognizing the Palestinian claim that Israel is maintaining an apartheid regime between the river and the sea, it is important to recognize the imperial origins of the spatial separation regime, and make clear who are the people who continue to advance it today.

A version of this article was originally published on the Social History Workshop’s blog, on Haaretz’s Hebrew site.

Shira Pinhas is a doctoral student of history at Tel Aviv University. Her research focuses on the social history of oil and mobility in Palestine during the British Mandate. Parts of this article were also published in a special issue of the Journal of Levantine Studies dedicated to the Middle East in global history.