B’Tselem spokesperson and colleague Sarit Michaeli was shot in the leg from close range on Friday by Israeli forces while documenting the weekly protest in Nabi Saleh, as she has been doing for years. She issued a statement Saturday on her understanding of what happened, which I translated below.

Although this is not the first time an Israeli has been wounded by IDF fire at West Bank protests (there are a handful of other cases), it is quite uncommon. It is certainly not the first time a Palestinian or foreigner has been wounded (there are dozens of such cases). It is important to note that Sarit is a professional NGO worker and her presence at the protests in Nabi Saleh is part of the organization’s work documenting human rights violations in the occupied West Bank.

As of Saturday evening, no Israeli mainstream media outlet reported on the incident. I contacted the IDF Spokesperson for comment and will update accordingly. (Response from a Border Police spokesperson has been added below) 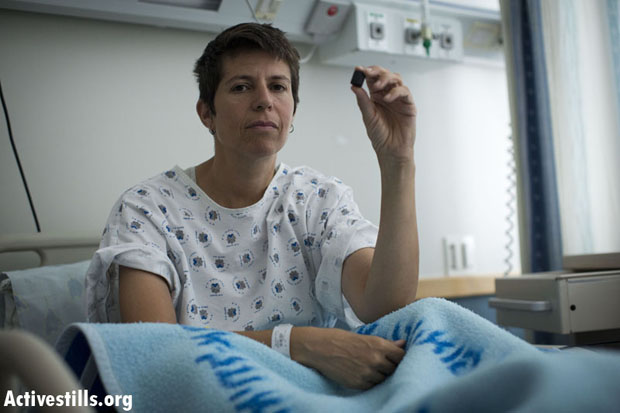 B’Tselem spokesperson Sarit Michaeli, holds a rubber coated bullet, which was taken out of her leg, in Ichilov hospital in Tel Aviv, July 20, 2013. Photo by: Oren Ziv/Activestills.org

On Friday I was shot with a rubber-coated steel bullet while documenting the demonstration in Nabi Saleh. The demonstration was dispersed by Border Police officers when the protesters were still on the main road that leads out of the village. After the Border Police began to disperse the crowds, some kids threw a few stones in their direction. About 20 minutes after the protest had begun, and after the procession had already been largely dispersed, a group of about nine Border Policemen and IDF soldiers stormed the main road of the village next to the gas station in the direction of a group of demonstrators, who were running away from them up the road.

I stood aside, close to the gas station. At a certain point one of the Border Policeman shot at me from what I estimate was a distance of no more than 15-20 meters. (The legal minimum range for a rubber-coated steel bullet is 50 meters).

I’m not really sure why I was shot at. I wasn’t in the path of the soldiers and I wasn’t doing anything that could be interpreted as a threat to them. They saw me beforehand with my camera filming, standing on the side, not in their way. In order to shoot at me, the Border Policeman had to knowingly point his weapon in my direction, or in the direction of a medic and two Palestinian female protesters who were close to me. No one standing in my vicinity threw any stones. The bullet penetrated my thigh and was removed at Ichilov Hospital in Tel Aviv.

UPDATE Sunday, 6:00p.m.: Sarit has uploaded the video she filmed as she was shot. As you can see below, the video backs her statement that she was clearly standing in the open, facing the soldiers, behind a first aid man. As can be seen, when she lies down from the injury, a stun grenade is also thrown at her by the soldiers.

You can see the same injury from the point of view of the soldiers in this video filmed by Bilal Tamimi (minute 2:30). The soldiers are not at risk, and there isn’t any visible reason for the shot.

Click here for a B’Tselem report from January 2013 on Israel’s crowd dispersal methods. The new report published in Hebrew is due out in English soon.

A Border Police spokesperson admitted that Michaeli was not throwing stones, but claimed she put herself at risk by positioning herself behind protesters and by not wearing clothing identifying her as press.

Claiming that the video was tendentiously edited, the spokesperson said the rubber bullet was fired from a range of at least 50 meters and was likely an errant bullet.

The details of the incident will be sent to the relevant authorities for further examination, he added.