Residents of Be’er Sheva were enraged to find out that a new bus company had announcements in both Hebrew and Arabic. After numerous complaints, the Arabic announcements came to an end. 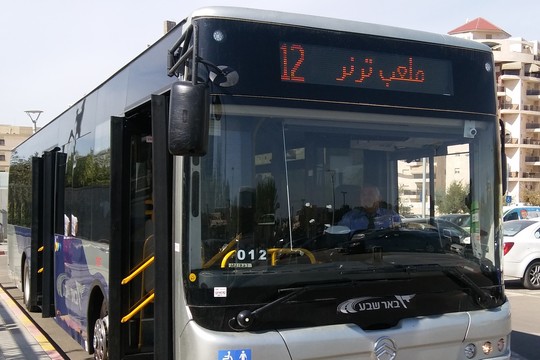 The company, Dan Be’er Sheva, won a tender in January of this year, replacing the Metro Dan company to the delight of many residents, who have repeatedly criticized the city’s poor public transportation. The new buses include a PA system, which announces upcoming stations in both Hebrew and Arabic in order to make public transportation accessible to more segments of the population. Tens of thousands of Arabic speakers live in Be’er Sheva, which serves as a metropolis to over 200,000 Bedouin in the surrounding areas. Arabic is Israel’s second official language.

It turns out that Arabic announcements, however, were too much for some residents. Their complaints over the bi-lingual PA system were first published on social media and included calls for boycotting the company. A local Be’er Sheva news site even ran a story under the headline, “Be’er Sheva’s residents are enraged: ‘Announcements in Arabic on the bus, from Metro Dan we have become Metro-Gaza.'” According to the article, the residents were surprised to discover not only that the bus also includes the written Arabic name for every stop, but that the bus’ PA system announces the name of every station in Arabic. One complainant said the announcements reminded him of Iran, adding that soon they would “start building mosques.”

Following the complaints, the company put an end to Arabic announcements on public buses, at least temporarily. According to the Ministry of Transportation, public buses must include written Arabic names, but not announcements.

Attorney Shada Aamer of the Association for Civil Rights in Israel (ACRI) demanded Transportation Minister Yisrael Katz bring back the announcements. “There is no doubt that this decision is illegitimate and illegal, which excludes an entire public from the public sphere and harms its basic right to equality,” Aamer wrote. “The Transportation Ministry must work to permanently fix the situation and to bring back the Arabic announcements in all bus lines in Be’er Sheva and in the rest of the country.”

The written information on city buses in Be’er Sheva appears in both languages, Hebrew and Arabic. As for the announcement system in Arabic, the issue will be taken into consideration according to the criteria and will be activated across public transportation. Announcements in Arabic on public transportation in Be’er Sheva were activated prematurely for less than a day, and thus was removed immediately. Following our inquiry, the announcement system will be activated according to the determined plan.

Implementing Arabic announcement systems in public transportation in Israel’s main cities is one of the recent positive developments in the country. In light of the repeated waves of incitement by the government, it might be one of the only ones.