facebook twitter email link
All Tanya Rosenblit wanted to do was get on a bus to Jerusalem. She didn’t have any plans to turn into the Israeli Rosa Parks, when a group of ultra-Orthodox Jews demanded she move to the back of the bus 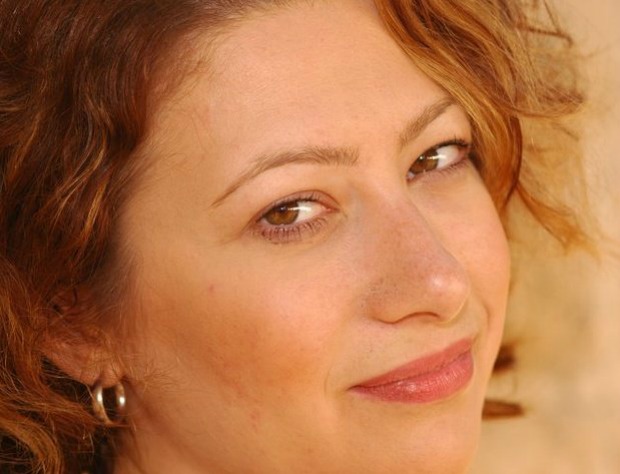 It was supposed to be just another regular Friday morning for Tanya Rosenblit. Tanya had to get from her hometown Ashdod to Jerusalem for a meeting there. On the way, Rosenblit experienced one of the most intimidating stories of religious coercion I’ve seen lately: She was told by a Haredi man to get to the back of the bus, or nobody was going to go anywhere.

And what do you think Rosenblit did? That’s right – she stayed put. And she took pictures of the whole ordeal and later wrote about it on Facebook. Here’s her story, which I publish a part of with her permission:

A bus ride to Jerusalem taking the wrong turn…

I lived in Israel all my life. I was brought up in a free country and I was taught the value of freedom as a basic right that could never be undermined by anyone. All my life, during my teens, my military service, my university years and then after I always felt as equal among my peers. I was always proud to be a woman and never felt deprived or weakened by men, until today.I had an appointment in an Orthodox Jewish neighborhood in Jerusalem and looked for easy transportation on a Friday morning. After checking the official Egged site, which is the leading bus company in Israel, I decided to take line 451 from Ashdod (my hometown) to Jerusalem. I chose this line because it stopped a mere five minute walk from my scheduled appointment.

The driver looked at the station where I was standing and didn’t stop. I had to signal him by raising my hand for him to stop. When I entered the bus he looked surprised. He explained that the only ones who go on the bus are Orthodox Jews. I sat behind him in the first row and asked for him to tell me when we get to my station.

At the next stop, Orthodox Jews started mounting the bus. At first, they just stared at me, but said nothing and moved on to sit somewhere in the bus behind us. Only one passenger decided that he preferred standing on the stairs near the driver, although there was plenty of space. I didn’t mind that, and focused on the music in my ears. But then, another one entered the bus, but instead of entering, he prevented the driver from closing the door. He looked at me with despise, and when I took off the earphones, I heard him call me “Shikse”, which means “whore” in Yiddish. He demanded I sit in the back of the bus, because Jewish men couldn’t sit behind women (!!!). I refused.

The driver tried to talk to him, explained that he was late, but the “penguin” wouldn’t budge. Another passenger, also religious and orthodox asked the driver to be refunded because he was gonna miss his meeting. He also said that he didn’t mind what was going on, he just wanted to get to where he was going and that the fact that they decided to stop the bus is a good reason for the driver to give him his money back. For company policy, he didn’t, but that’s a different story.

The driver understood he was not going to move anytime soon, so he called the police. Until that moment, no one tried to talk to me. The only comment I heard was from the initiator of this whole mess ordering me to sit in the back of the bus as a sign of respect. In the meantime, a crowd started forming outside the bus, as a result of his cries. I was starting to get scared, to tell you the truth. There were like 20 of them, all wearing black. Most of them were just curious, but they were definitely on his side.

After a while, the police came. It was one officer who first talked to the driver. The driver explained to him that he didn’t tell me anything and that they wouldn’t budge. Then, the officer had a long conversation with the person who started this whole mess. It seemed quite friendly, and in the end, the policeman came to me and asked me if I was willing to respect them and sit in the back of the bus. I answered that I respected them enough by wearing modest cloths, because I knew I was going to an Orthodox neighborhood, but I wouldn’t be humiliated by those who can’t even respect their own mothers and wives.

The officer stepped down and so did the leader of the little protest that was going on. He stayed in Ashdod, while the rest of the Orthodox Jews, including those who got on the bus later on boarded the bus and quietly went to sit behind me. The person who chose to stand on the stairs at the beginning remained on the stairs sitting and praying throughout the entire bus ride, because he wouldn’t sit behind a woman!!!

The entire delay took about half an hour, but we managed to arrive on time. In the neighborhood, I met some very pleasant people who were very happy and eager to help me when I asked for directions, men and women, Orthodox and religious. When I later decided to take a walk around the Mahane Yehuda Market in Jerusalem, I was again treated as an equal, as a secular woman, with the utmost respect and sympathy, by men and women of all streams.

The reason I am posting this story is not to declare the Orthodox Jews as pure evil and the oppressors of human rights and liberties. I want to point out that this is a social and educational problem. There are a lot of lovely things about religion, but forcing people to choose religion is wrong. It is wrong to use religion as an excuse to eliminate people’s basic rights: the right for freedom and the right for dignity. 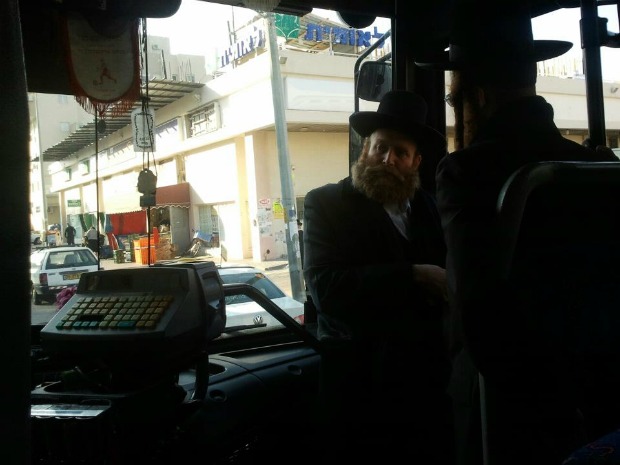 Waiting for Rosenblit to move to the back, preventing driver from moving (photo: Tanya Rosenblit) 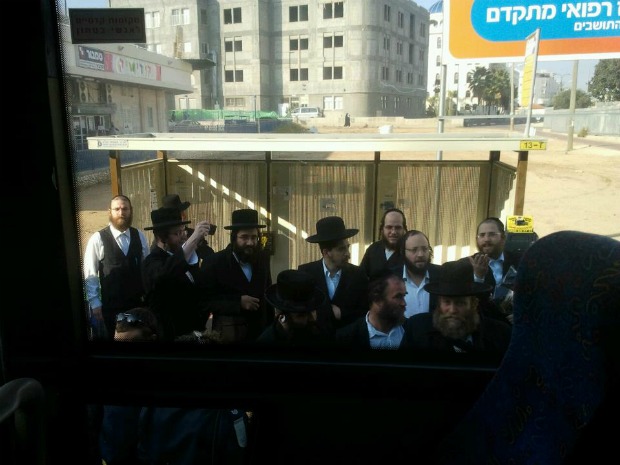 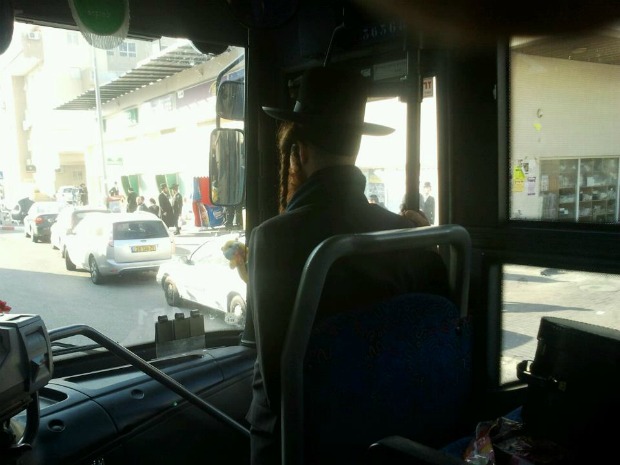 He won't sit behind a woman (photo: Tanya Rosenblit) 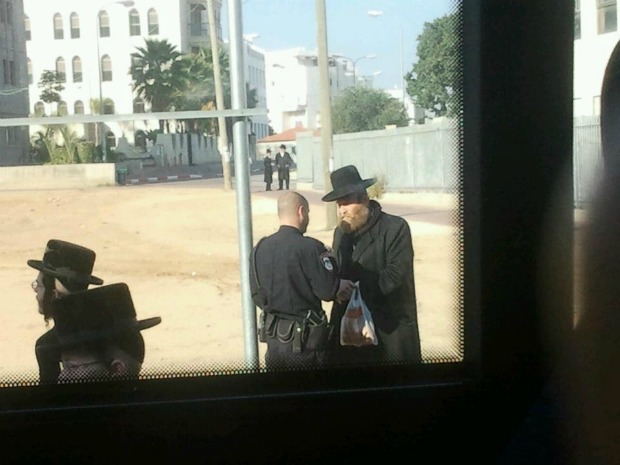 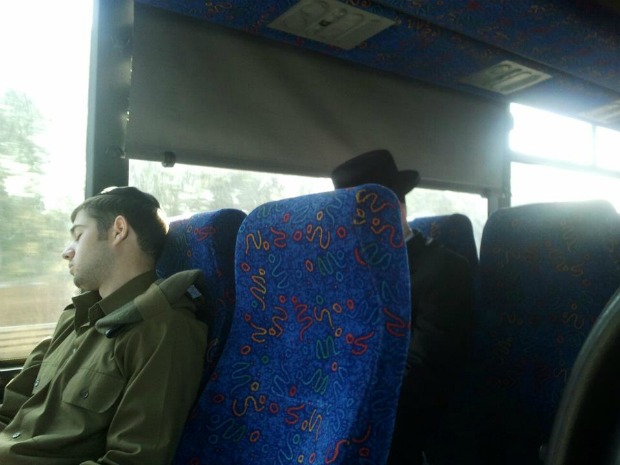 Most passengers just didn't care (photo :Tanya Rosenblit)
Tanya’s story filled me with mixed emotions. First and foremost, I am in awe of her bravery. I don’t think there was any danger of violence, but to stand up to that kind of intimidation shows an inner strength of a very special kind.

And, of course, it filled me with anger. That the policeman actually asked her to move. And that this is what Israel is turning in to. It’s a slow process. But it’s steady.

Tanya wishes to make sure that her cry is not against the ultra-Orthodox as a whole and does not wish to turn this into a religious war of any kind. As she told me today: “The extremists are the problem. In Israel 2011 we are waging a battle for individual rights. We should fight for freedom and tolerance for all.”

I agree with Tanya that these are extremists. But I also believe their numbers are on the rise, and that the current political system has shown no interest whatsoever in changing the tide.

P.S. I just have to add that as much as I don’t like the word “shikse”, I don’t particularly approve of the term “penguin” as well. I can only presume it was written when emotions ran high.