Despite lofty promises and pilot programs aimed at improvement, evidence points to little change in the patterns of abuse Palestinian children are subjected to when arrested by the Israeli army. 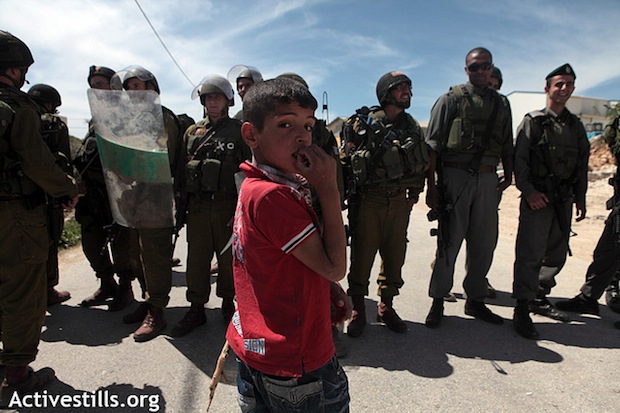 The Israeli Ministry of Foreign Affairs announced in March 2013 that it would study the conclusions of a UNICEF report on children held in military detention which found that ill-treatment appeared to be “widespread, systematic and institutionalized” and work to implement them through “ongoing cooperation” with the UN agency. Two-and-a-half years on and around 2,250 arrests later, there is new evidence as to how this “cooperation” is progressing.

To begin with, the number of children arrested at night appears to have jumped from 51 percent in 2013 to 65 percent today. One possible explanation for the jump is that the military authorities appear to be issuing far fewer summonses than last year, relying instead on the army breaking down doors in the middle of the night rather than parents bringing their children for questioning during the day. The latest evidence also indicates that with an increase in night arrests, more children are being transferred on the floor of military vehicles from their homes to interrogation centers – something a summons can make redundant.

The number of children who report being painfully hand tied and blindfolded has remained fairly constant, but there has been a small increase in the percentage of children who report being subjected to physical violence during their arrest, transfer and/or interrogation. Most children continue to report being shown, or made to sign, documentation written in Hebrew at the conclusion of their interrogation and a majority continue to be strip searched in a humiliating fashion on arrival at a detention facility. Also as in the past, around 50 percent of children are still being unlawfully transferred to prisons inside Israel in violation of the Fourth Geneva Convention and Rome Statute.

However, there is one benchmark that appears to show some improvement since the UNICEF report and that relates to the number of children now being informed of their right to silence. Back in 2013, the percentage of children informed of this right was basically none. Now, the percentage has jumped to 28 percent. Unfortunately, on closer inspection even this ray of hope ultimately disappoints because first, 78 percent of children are still being denied the right, and secondly, the children who are informed are frequently done so in a wholly unacceptable manner. For example, a minor recently reported that as one interrogator told him he did not have to answer their questions, the other interrogator threatened him with rape unless he confessed.

So after more than two years of “ongoing cooperation” and “dialogue” between the military authorities and UNICEF, it would appear that there has been little substantive improvement and it is essentially business as usual. The reason for the lack of progress is not difficult to understand once you appreciate that the system of military detention that has operated since June 1967 is an essential element in controlling the Palestinian population in the West Bank in order to ensure that 400,000 Israeli settlers can go about their daily lives in relative peace and comfort.

Like it or not, this lack of progress is one of the factors that the Prosecutor at the International Criminal Court is likely to take into consideration when deciding whether or not to initiate an investigation.