Playing on Netanyahu’s warning about Arab citizens of Israel voting in the last elections, a grassroots campaign raises tens of thousands of shekels to bring Bedouin from unrecognized villages to the polls — not quite in droves, but mini-bus by mini-bus. 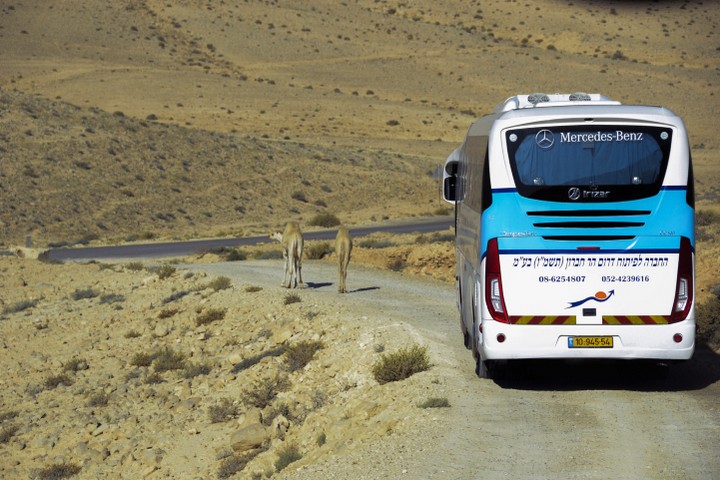 Illustrative photo of an Israeli bus driving along an unpaved road in the Negev/Naqab desert. (Zoe Vayer/Flash90)

On Election Day in 2015, Benjamin Netanyahu sent a video to his supporters warning that “Arabs are heading to the polls in droves, and left-wing organizations are bringing them in buses.” This Tuesday, his then-baseless exhortation will become a self-fulfilling prophecy.

More than 1,400 Israelis have donated tens of thousands of shekels to a crowdfunded initiative to bus to the polls Bedouin citizens of Israel who live in unrecognized villages in the Negev desert (Naqab, in Arabic).

Get-out-the-vote efforts are par for the course for nearly every party in nearly every democratic country these days. In the United States, both major parties field volunteers to drive voters to the polls. Even Netanyahu’s warning about droves of Arab voters was a scare tactic meant to push his voters off the couch and to the ballot box. Turnout is almost always a deciding factor in elections, and motivation to vote is a driving force in turnout.

The campaign to bus Bedouin voters, however, was designed to solve a different problem. So-called unrecognized Bedouin villages, where tens of thousands of Israeli citizens live, do not have the most basic infrastructure most developed nations afford their citizens. They do not have running water, electricity, sewage, paved roads, public transportation — and no polling places.

Anyone living in an unrecognized Bedouin village who wants to vote must travel significant distances in order to do so in most cases. And without a car, it’s extremely difficult if not impossible to pull off.

The initiative, which is being fully funded by a crowdfunding campaign run by “Zazim,” an Israeli grassroots organizing group akin to MoveOn, and the Regional Council of Unrecognized Villages of Negev, is expected to bring between 6,000 and 10,000 Bedouin voters to the polls on Tuesday.

According to Zazim’s website, as of Sunday morning the campaign had raised enough money to hire at least 40 mini-buses and all-terrain vans that can ferry as many as 15 voters at a time between their villages and polling places.

“A high percentage of people in unrecognized villages don’t show up to vote simply because they don’t have a way to,” estimated Atia al-Asam, head of the informal unrecognized villages council, which as part of the campaign mapped out what the villagers need to make it to the polls on Tuesday.

“The polling places are only in recognized villages,” al-Asam explained, adding that some are forced to travel up to 70 kilometers (over 40 miles). He believes it is the lack of transportation that makes most Bedouin residents of the unrecognized villages stay home on Election Day.

The state has an obligation to enable its citizens to vote, al-Asam said. “Why don’t they put polling places in the unrecognized villages where there are schools? It would solve the problem.”

“We don’t tell people whom to vote for,” al-Asam emphasized, “the point is that they vote.”

At Zazim, the message was more political, inasmuch as the legitimacy of Arab votes and voters has been politicized in Israel.

“In the 2015 elections, Netanyahu tried to present Arab citizens’ votes as a threat but the real threat to democracy is the worsening incitement against 20 percent of [Israeli citizens],” Zazim’s executive director, Raluca Ganea said, referring to the more-than 1.5 million Arab citizens of Israel.

“Our initiative is the grassroots answer to that incitement, Ganea added. “Our community is extending its hand in solidarity to the Bedouin citizens of the Negev, and is sending a clear message to all Arab citizens: your voice counts to us.”