Years of failed coexistence projects between Jews and Palestinians, which were always intended to show Jews that we too are human beings, made me realize that enough is enough. 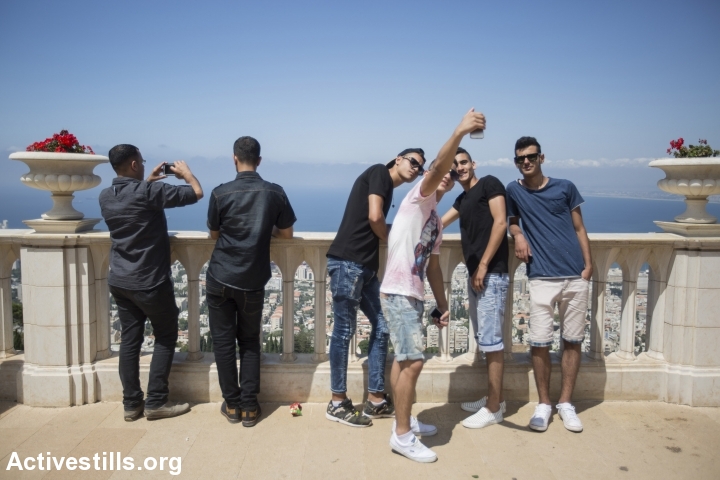 Palestinians, many of whom came from the West Bank, are seen in Haifa during the last day of the Eid al-Fitr, July 19, 2015. (photo: Faiz Abu Rmeleh/Activestills.org)

Years of failed coexistence projects between Jews and Palestinians, which were always intended to show Jews that we too are human beings, brought me to the conclusion that enough is enough.

On the day I first opened my eyes I met my dad’s Jewish friends. They were very nice. “Kiffi,” the blonde soldier who worked as a server in the wedding hall where my dad cooked, loved me. To this day, I remember how one day I went with him on errands throughout the town of Pardes Hannah. Kiffi let me play with his gun. When I was curious, he let me have my first gulp of beer. I was told by many that I was a good-looking but mischievous child. The compliments had an added value when they came from Jews. I never asked myself why.

I had fun on the days when “al-Hawajeh” (“the mister”), my uncle’s friend, was supposed to visit us. There was a festive atmosphere in the house and the entire neighborhood knew it. Mom, grandma and the uncles would be busy preparing food starting in the morning. I would watch Dr. Yona eat from afar. I would sit there relaxed and satisfied when he complimented my grandmother on the food she had prepared.

Everyone was surprised by the ability of my uncle, the trader, to connect to Jews. He was always praised for it. He taught them at Kfar Hayarok, an agricultural youth village and boarding school near Tel Aviv, so he knew them well and knew how to win over their hearts.

During the olive harvest each year he would always bring labneh, za’atar, fresh-baked bread and olive oil to some of his Jewish friends’ homes. That’s how you do business with them, I deduced.

We watched the Israel-Jordan peace treaty signing on live television at our school. Just a year later, my friend Bader told me that Prime Minister Rabin had been murdered the night before. We didn’t study that day. We sat and mourned in our classroom, with its asbestos ceiling, broken windows and no door. “Ustaz” Afif, our music teacher, handed out the lyrics that began “Let the sun rise, and give the morning light,” and played the classic Israeli “Song for Peace” on his oud. We sang with him, we sang from our hearts. Tears dripped from my eyes every time I saw Israeli musician Aviv Geffen sing, “I am going to cry for you, be strong up there,” a song that became synonymous with Rabin’s death.

When I was 14 they took us to the Jewish-Arab Center for Peace at Givat Haviva to participate in a special project between my school and another school from the Jewish city of Bat Yam. Sivan’s green eyes and brown curls drew me in. We exchanged glances, I approached her smiling. She smiled back. I felt her classmate’s muscular shoulder push into my back. “Leave her alone, she has a boyfriend,” he whispered to me threateningly and furiously.

After a few introductory meetings at Givat Haviva, which took place entirely in Hebrew, it was time to visit each other in our homes. From the get-go we understood that there had been kids from Bat Yam who had refused to participate in the project. Furthermore, not everyone who came to the meetings at Givat Haviva agreed to the home visits. Including Sivan.

Nevertheless, the teachers asked us to host them like we know how to, the way it is customary in our culture. Khaled and I welcomed Dudu and Yossi at Khaled’s house. As is customary, Khaled’s mother cooked good Arab food. Dudu and Yossi weren’t afraid to come to our homes in the village — quite the opposite, they were very curious. They were surprised when they realized that we sleep on beds. They were even more surprised when they saw a computer in Khaled’s room. After mulling the question for a while, Dudu asked about the animals that are supposed to live with us in our homes.

When we went to Bat Yam two weeks later, they didn’t invite us to their homes. Instead they hosted us at their school where they prepared a special buffet of hummus, falafel, pastas, salads — and cake. When the school bell rang they all rushed home and left their guests at the school.

That’s how the coexistence project ended, the project in which our teachers and moderators unintentionally taught us it is our responsibility to prove that we, almost like our Jewish counterparts, are human beings. The coexistence project only made more apparent the master-slave dynamic created by the occupation. Until that day I had loved hearing the phrase: “But you don’t look Arab.” Not anymore.

Years later my boss sat across from me at the table where we ate at work. Her appetite was whet by the sight of the stuffed grape leaves that my mother prepared for me. She asked if my mother might cook for her because she and her family love Arab food. This time I knew what to say.

Muhammad Kahba is an activist with the Palestinian youth group, Al-Hiraq Al-Shababi. This article was first published in Hebrew on Local Call. Read it here.