From arrests to home invasions to airstrikes, the repercussions of Bibi’s finger pointing are being felt throughout the West Bank and Gaza.

The scheme harkens to December 1992, when then Prime Minister Yitzhak Rabin famously banished 415 Palestinians to what was considered a no-man’s-land just over the Lebanese border. Literally dumped on a hilltop and stateless, these accused members of Hamas and Islamic Jihad set up camp in the harsh winter — and waited.

Their plight — in an age of faxes, not smartphones — went “viral,” though, becoming front page material and earning Israel yet another Security Council rebuke. And though the sheer length of their exile eventually dimmed interest in the story, those who returned as part of a U.S.-brokered deal were hailed as heroes.

Among them was Ismail Haniyeh.

This time, Haniyeh is already sequestered in Gaza, where he and nearly two million other Palestinians live in what the UN’s former humanitarian coordinator John Holmes called an “open-air prison.” That description, of course, has been rejected by Israeli leaders, but a report today cites their plans to expel Hamas members from the West Bank to Gaza — a fact that, as Yousef Munayyer pointed out, makes plain that Israel already views the strip as a “prison colony.”

In any case, Netanyahu’s threats are as yet a red herring. In an exclusive interview with The Jerusalem Post published today, former Mossad Division Head Rami Igra called Netanyahu’s chest-beating over Hamas “premature,” adding that the prime minister’s accusatory rhetoric was “more political than based on fact.” Igra’s comments come a day after Netanyahu, quoted in The New York Times, said he knew “for a fact” that Hamas carried out the alleged kidnappings. 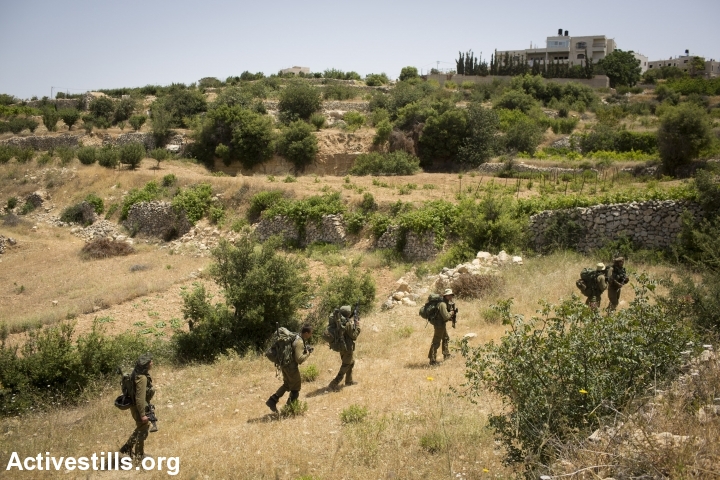 Israeli soldiers enter the city of Halhul, near Hebron, in a search for the three kidnapped teenagers. (photo: Activestills)

Never mind that all of this is playing out against the backdrop of Iraq’s unraveling — prompted, of course, by a war based on another unsubstantiated “fact.” What matters now is that Netanyahu has used his Hamas indictment to effectively declare war on all Palestinians, and the repercussions are being felt throughout the West Bank and Gaza. Dozens have been abducted by Israel’s occupying military, home invasions are ongoing, and Gaza has endured two consecutive nights of airstrikes.

Meanwhile, neither the yeshiva students nor the victims of Netanyahu’s virulent politics are any safer. Among the latter is the Israeli public, which seems to have forgotten that their three compatriots went missing in the so-called “Area C” — the 62 percent of the West Bank over which the Palestinian Authority has no authority whatsoever. The lesson, it seems clear, is that military occupation — these days at full, fanatical tilt — can no sooner bring security than protect three Jewish teenagers.

Read more on the West Bank kidnapping:
Matar: Israel’s crackdown moves beyond Hamas militants
Sheizaf: Reward activism and diplomacy, not violence
Derfner: The kidnapping is indefensible – but Israel helped provoke it
Zonszein: Israelis aren’t the only ones facing national tragedy