‘Apartheid’ is rapidly becoming the new political term of condemnation and delegitimization in international politics. But is it truly the best description of Israel’s policies toward the Palestinians?

Is apartheid an appropriate term to describe Israel’s occupation of the West Bank? In an article published on +972 late last year, Ran Greenstein argued that it is, relying on international law rather than historical grounds admitting that Israel’s occupation of the West Bank is different—but not better—than South Africa between 1948 and 1994. “Apartheid” is rapidly becoming the new political term of condemnation and delegitimization in international politics. It is rapidly replacing fascism as that term. India used to refer to the nuclear non-proliferation regime as “nuclear apartheid.” But the process is instructive.

Fascism is the term used to describe the ideology and rule of the Fascist Party in Italy between 1922 and 1945 and more broadly to describe the ideology of similar parties in Europe in that period. But since the 1930s it has become a general term of abuse that is so overused that the only thing that one can meaningfully discern from its use is that the person wielding the term does not approve of its object. How did this come about?

In the 1930s the International Communist Movement, which was an ideological and political enemy of Italian fascism and German National Socialism, came up with an official definition of fascism tying it to capitalism. It then became a general term of abuse to use against any group that disagreed with the political line of the Soviet Union at the time. Social democrats in France were labeled “social fascists” when the French Socialist Party condemned the Nazi-Soviet nonaggression pact in August 1939. After this it was used by fellow travelers and Communists to describe anyone who was an opponent of the Soviet Union. Because of the alliance between Fascist Italy and Nazi Germany the term was soon applied to Nazi Germany and eventually to all the Axis allies during World War II. Because the two countries were allies and their ideologies were very similar there was justification in using the term for Nazi Germany. 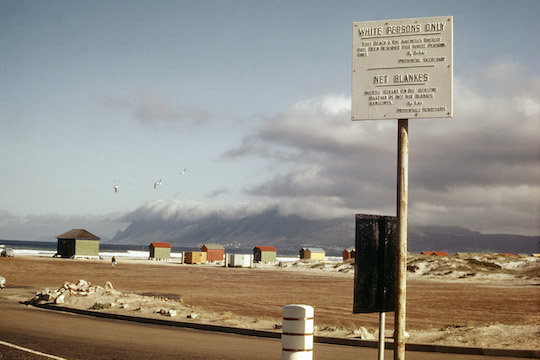 But after World War II the terms fascist and Nazi became general terms of abuse, especially by those on the Left mirroring the similar use of the term Communist by those on the Right.

During the period of decolonization in Africa in the late 1960s and early 1970s the core of sub-Saharan Africa—the independent African countries—and the core of the Middle East—the Sunni Arab regimes—formed a political alliance in international forums. The Africans would support the Arabs against Israel in exchange for the Arabs supporting the black states against white minority regimes and Portuguese colonialism. This became part of the non-aligned movement—that at one point was headed by the very aligned Cuba. The result was a counter-alliance between Jerusalem and Pretoria formed in the mid-1970s by the Labor Party and intensified under the Likud after it came to power in 1977.

Greenstein quotes the official UN definition of apartheid: “any distinction, exclusion, restriction or preference based on race, color, descent, or national or ethnic origin.” Does he really believe that there were no instances of such in black Africa or in the Middle East, two regions infamous for ethnic power in multi-ethnic states? Why was the term apartheid not applied to the Hutu genocidal regime in Rwanda in 1993-94? Because applying the term apartheid to one black regime in Africa would make many others subject to its use. Why has the term not been applied to discrimination by the Ba’athist regimes in Iraq and Syria against the Kurds? Because the Kurds are part of the periphery in the Middle East and the Arabs are part of the core.

Greenstein ends his article by asking the question: if apartheid is not the right term, what is a better term? Here are two: “settler colonialism” and a “pro-settler military occupation.” Both are as applicable to Algeria as they are to South Africa. By bringing up Algeria this may have the fringe benefit of focusing attention on the negative effect of Israel’s party system, which is very similar to that of the French Fourth Republic.

Historians would have problems with applying the term apartheid to the Portuguese colonial regimes in Angola and Mozambique, which clearly fit the legal definition that Greenstein supplies. But they would not fit a historical definition because the Algerian settler regimes were not examples of herrenvolk democracy—master race democracy where the vote is reserved for whites. The Portuguese regimes were not democracies of any type and theoretically blacks could become full citizens, although only about one percent of blacks met the qualifications. Even the Rhodesian Front regime in Rhodesia between 1965 and 1979, which modeled itself on South African apartheid, gave the vote to some Africans. Outside of South Africa, South African-occupied Namibia, and Rhodesia the use of the term apartheid sheds little light on a situation but is simply the latest politically-correct word of abuse.

Read more:
If this isn’t apartheid, then what is it?
Why is the Western left so obsessed with Israel?