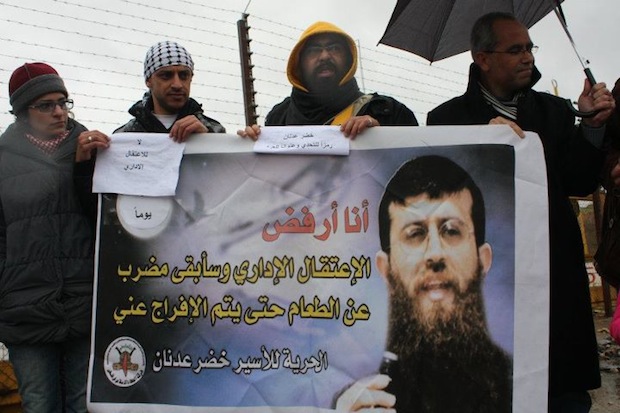 The writing on the poster quotes Khader Adnan, it reads: “I refuse administrative detention and will remain on hunger strike until I am released.” (Photo: Sharif Solaiman, Addameer.org)

Khader Adnan; courageously fighting for dignity, employing his stomach as a weapon to call for justice, and fearlessly facing death.

We have reached a moment no one can be silent anymore. Khader Adnan is now on his 50th day of hunger strike! No matter who you are, you cannot overlook Khader Adnan’s current condition. The silence of many human rights organization is deafening, it is intolerable and unforgivable. Khader Adnan is currently the longest lasting Palestinian on a hunger strike.

Khader Adnan has entered his 50th day of hunger strike protesting his illegal detention by Israel. Adnan was sentenced with administrative detention, which basically means Israel holds no charge or any evidence against him. Adnan is held in Israeli prisons without charge and without facing proper trial or prosecution, this is illegal under international law which clearly states that detainees should face proper prosecution and should have their charges read out to them.

Khader Adnan, 33 years old, was born on the 24th of March, 1978. He resides in the village of Arraba, Jenin. Adnan is married with two daughters; his wife is five months pregnant with a third child. He was arrested on the 17th of December 2011 from his house in Arraba, at 3:30 AM as soldiers raided his house. He is now detained at the Ramleh prison hospital, chained to his bed. Addameer Prisoner Support and Human Rights Association, has the account on the arrest of Khader Adnan: “Before entering his house, soldiers used the driver that takes Khader’s father to the vegetable market, Mohammad Mustafa, as a human shield by forcing him to knock on the door of the house and call out Khader’s name while blindfolded. A huge force of soldiers then entered the house shouting. Recognizing Khader immediately, they grabbed him violently in front of his two young daughters and ailing mother.”

Khader Adnan’s health is rapidly and seriously deteriorating. Although he has been moved to the prison hospital, Adnan wasn’t subject to any medical checks or treatment; instead his arms and legs have been tied to the bed he sleeps on, along with 3 guards guarding his room. Addameer also reported that his family members were prevented from visiting; the Israeli authorities didn’t grant any of his family members any permits that would enable them to visit. Addameer issued a statement stating that the probable reason Adnan was moved to hospital was to further isolate him from his family, lawyers, and other prisoners.

Currently, according to B’Tselem, there are about 307 Palestinians held under administrative detention. Israel continues to hold Palestinians without charge and without proper trial. The Israeli paper Haaretz has reported that – to be exact, 99.74% of cases heard by the Israeli military courts in the West Bank end in a conviction, according to data in the military courts’ annual report. The injustice of the Israeli court system is crystal clear to everyone; Khader Adnan is in the process of resisting this terrible injustice. In the last couple of days, it has been reported that a dozen more prisoners have joined Khader Adnan in his hunger strike, and many others are preparing. It is frustrating to know that Palestinians are now resorting to this last method to resist the injustice of the Israeli occupation. Please get their voice heard, and fight this injustice, especially the terrible court system.

Here is how you can help Khader Adnan:

Write to the Israeli government, military and legal authorities and demand that Khader Adnan be released immediately and that his administrative detention not be renewed.

Write to your own elected representatives urging them to pressure Israel to release Khader Adnan and to put an end to such an unjust, arbitrary and cruel system of incarceration without trial.