A new initiative to get Americans citizens living in Israel to vote in the upcoming presidential election claims it is not advocating a specific candidate. However, its strategic campaign manager admitted it is funded by the “Adelsons” of the philanthropic world. 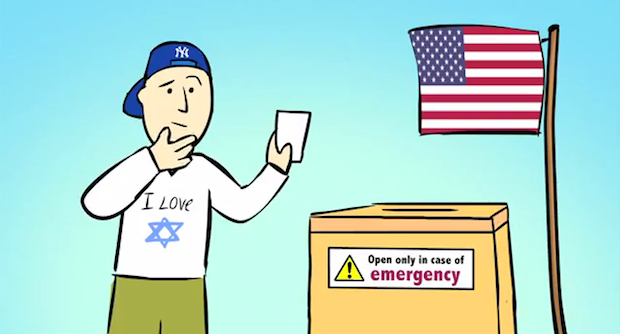 I recently came across an ad online seeking volunteers for something called the “iVoteIsrael Campaign.” The link was to a very polished website that encourages Americans living in Israel to vote in the upcoming U.S. election on November 6, 2012.

We are a diverse group of Olim, recent-arrivals as well as vatikim from all over the country who are deeply concerned about the safety, security and future of Israel. Most importantly, we want to see a President in the White House who will support and stand by Israel in absolute commitment to its safety, security and right to defend itself.

The initiative, organized by “Americans for Jerusalem” – a U.S.-registered 501 c(4) nonprofit established solely for the purpose of this 2012 campaign – provides an easy interactive resource to make it as simple and quick as possible to register an absentee ballot. It claims to be nonpartisan and is legally barred from advocating for a specific candidate, but the campaign’s rhetoric certainly perked my ears: A president that supports Israel “in absolute commitment to its safety, security and right to defend itself.” Absolute is a strong word. And “security” for Israel means very different things, depending on whom you ask.

A high-quality video on the website explaining the importance of voting in the upcoming election and the logic behind the initiative:
[youtube]http://www.youtube.com/watch?v=AgBg5mUUku8[/youtube]
So they want Americans living here to make Israel the chief factor in voting for the next U.S. president. I called the organization, and after expressing interest in volunteering in the south Tel Aviv area, I was promptly contacted by the campaign’s strategic manager, a British-Israeli named Aron Shaviv. He is no stranger to running election campaigns, having worked as a staffer with the Yisrael Beiteinu campaign in 2006, as well as heading campaigns for center-right candidates in Eastern Europe.

He told me over the phone that he sees the initiative like the work on any other U.S. presidential campaign – visible and grassroots – where the specific focus here is on framing the election in terms of which candidate is best for Israel. And with plenty of Americans living in Israel  (according to estimates, anywhere between 100,000-300,000), there is a chance to influence the outcome.  “If you can bring 5,000 in Florida, that’s a game changer,” he said.

I asked him whether it mattered that some of the Americans eligible to vote here had not lived in the United States in decades, and some had never even lived there at all.  “Legally no – 18 states out of 50 allow you to [vote] if your parents are citizens, and you were never there. Morally – the next president and congress will have a profound effect on our safety and security as Americans living in Israel. The decision will affect your life directly and it doesn’t make sense not to vote.”

According to a recent poll published in the Jerusalem Post,  59.9 percent of Americans in Israel said they “would likely, very likely, or definitely vote in the U.S. election, 19.6% said it was unlikely, and 18.1% said they would definitely not cast their ballots.” More significantly, of those who would vote, Republican candidate Mitt Romney received 32.3%, compared to U.S. President Barack Obama with 14.7%, with 27.2 calling themselves undecided.

Asked who funds the campaign, Shaviv told me they are allowed to received undisclosed corporate donations, but he did choose to share that much of it is from Jewish philanthropists, the “[Sheldon] Adelsons of the world,” he said, explaining it was largely conservative figures connected to the Jewish world and Israel. “If you are a Jewish voter [in America] you are voting on domestic issues. We believe that if people factored Israel into their voting pattern, they might be inclined to vote differently,” he added.

Currently, the majority of Jews in America vote democrat, and they do so with domestic issues in mind, Israel not being a major factor in their decision. Over the last year, the GOP has been hitting Obama for not being “pro-Israel” enough, in order to try and leverage votes from Jews and Christians alike. (This, despite Obama’s record of ultimately being remiss on Israel’s continued policy of occupation and settlement expansion, and his recent reiteration of America’s biased support for Israel to a group of Orthodox American Jews.)