Stories of Arab Christian-Muslim tensions are increasingly appearing in the news. The bottom line in many of these reports is that Christians are not welcome in Muslim or Arab countries, and they feel that they have no place there. Egypt has been at the forefront of these stories, with reports of burned churches and the persecution of Christians. These reports do touch on some elements of Christian-Muslim relations, but most are exaggerated and seek to focus on any negative aspect they can.

The Arab West Report has focused on misleading publications about Muslim-Christian relations. It’s cheif editor, Dr. Cornelis Hulsman, spoke two weeks ago to a group of students in Cairo from the Center for World Religions, Diplomacy and Conflict Resolution of George Mason University, where I work. He lamented current journalistic practices in Egypt, which do not investigate accusations of hate crimes. His organization tracks media reports on Muslim-Christian incidents, and sends investigators to verify accuracy and biases. They found that many conflicts that do not originate as faith-based get branded as religious conflicts without thorough investigation.

But perhaps what gives the impression that Christians and Muslims are in a constant struggle is the lack of positive news about Muslim-Christian relations. After the death of the Coptic Pope, Shenouda III,  The Middle East Media Research Institute (MEMRI) reported on Wagdy Ghoneim, a radical Imam preaching against Christians and the pope. The Arab West Report pointed out that numerous Muslim Imams spoke positively about the pope and of Marshall Tantawi’s decision to give Christian government employees three days off to mourn Pope Shenouda III. 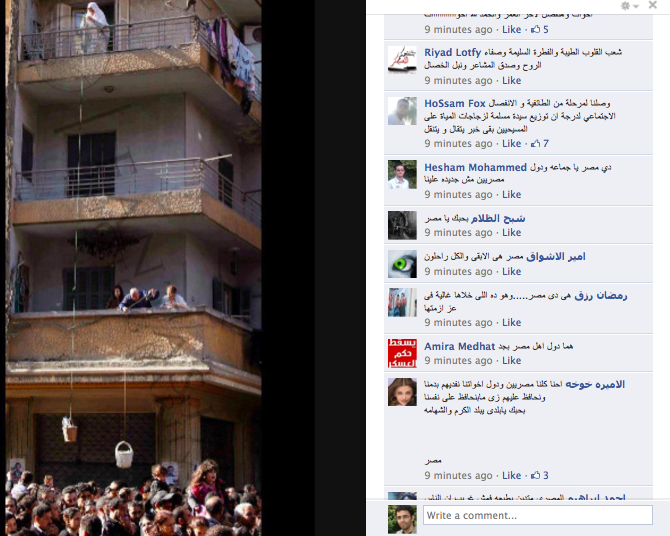 The picture above  was posted on the Egyptian revolutionary  “Kolena Khalid Sa’id” Facebook page. The picture shows a Muslim woman with a hijab lowering a bucket of water to Christians mourning the death of Pope Shenouda III. According to the page, she did this for several hours. This woman presents hope and the potential future of Christian-Muslim relations. Publicizing this woman’s action will rob the extremists of their legitimacy and strengthen coexistence efforts in Egypt.

George Mason University students had many other meetings with Christians and Muslims, and both sides spoke positively about  Christian-Muslim relations. The group met also with Salafi and Muslim Brotherhood leaders. Mohammad, a Salafi, surprised the class by claiming that Christians and Salafis were equally persecuted under Mubarak’s regime. He accused the former government of limiting the freedom of worship to both groups. Mohammad’s vision for Egypt includes freedom for all, with security for Christians and Muslims alike.

But Mohammad didn’t brush off existing problems, and admitted that some clerics have taken extreme positions. He pointed out a Salafi cleric who spoke against soccer, proclaiming the game as forbidden in Islam. As a response, a group of young Salafis organized a joint soccer game with Christians to protest the religious ruling. The game proved that Christians and Muslims can stand together against extremism, and that they are not natural enemies.