By the time the documentary Five Broken Cameras came out in November 2011, the Palestinian village of Bil’in in the occupied West Bank had already become the symbol of Palestinian non-violent resistance to Israeli occupation, Israeli settlements and the separation wall/barrier. It had already celebrated six long years of weekly Friday demonstrations led by the residents, joined by Israeli and international activists and aggressively repressed by the IDF; it had already seen several of its residents killed after being shot by IDF soldiers during these demonstrations (among them, Bassam Abu Rahme and his sister, Jawaher Abu Rahmah); and succeeded in pressuring the government to alter the route of the barrier and take down the fence (which was only implemented almost 4 years later).

All these events are told in the documentary through the eyes (and lens) of Emad Burnat, a resident of Bil’in whose “five broken cameras” were used to document his life and activism between 2005 and 2011 and constitute the film’s story. Footage of weekly protests and IDF night raids are interspersed with snapshots of his family, and his own personal experiences. The documentary is directed by both Burnat and Guy Davidi, an Israeli filmmaker and activist.

The film has won critical acclaim and numerous awards, including the Sundance World Documentary Directing Award. It was also chosen as one of the best independent films of 2012 by Indiewire, and is shortlisted for the Oscar’s best documentary (final nominations will be announced January 10). It also was even selected best Israeli documentary by the right-wing Israel Hayom daily, Sheldon Adelson’s pro-Netanyahu free tabloid.

Here is a trailer:

Guy Davidi has decided to take this film and use it as an educational tool to try and raise awareness among Israelis, most of whom either haven’t heard of Bil’in or don’t really know (or believe) exactly what has gone on there. The Education Ministry’s “culture basket,” which determines which films and other media and programming are introduced in Israeli schools, doesn’t take politically charged films – certainly not one like this, which exposes the darkest sides of the IDF’s violent, illegal and unethical conduct – and which shouldn’t be surprising considering that Education Minister Gidon Sa’ar is behind instituting Israeli school trips to occupied Hebron, and the effort to open a university in the settlement of Ariel.

Davidi is therefore launching a campaign to try and bring the movie to Israeli schools, to teenagers who are gearing up for their army service. If he cannot do it through Israel’s formal educational institutions, then he is doing it informally, through independent initiatives. 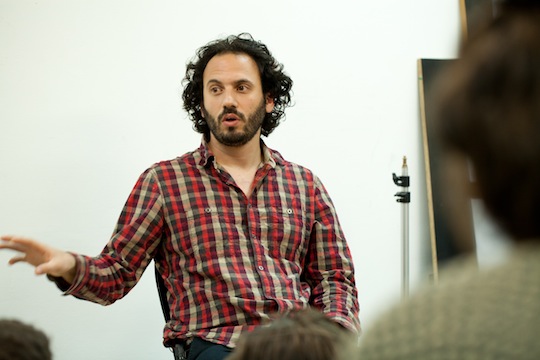 The goal is to open up a discussion about the Education Ministry’s “culture  basket” and state censorship of political art. The film won’t be included in the culture basket since the Education Ministry actively and systematically chooses not to select movies that are critical and touch on sensitive issues.

To learn more about the campaign, get involved or contribute, please click here: