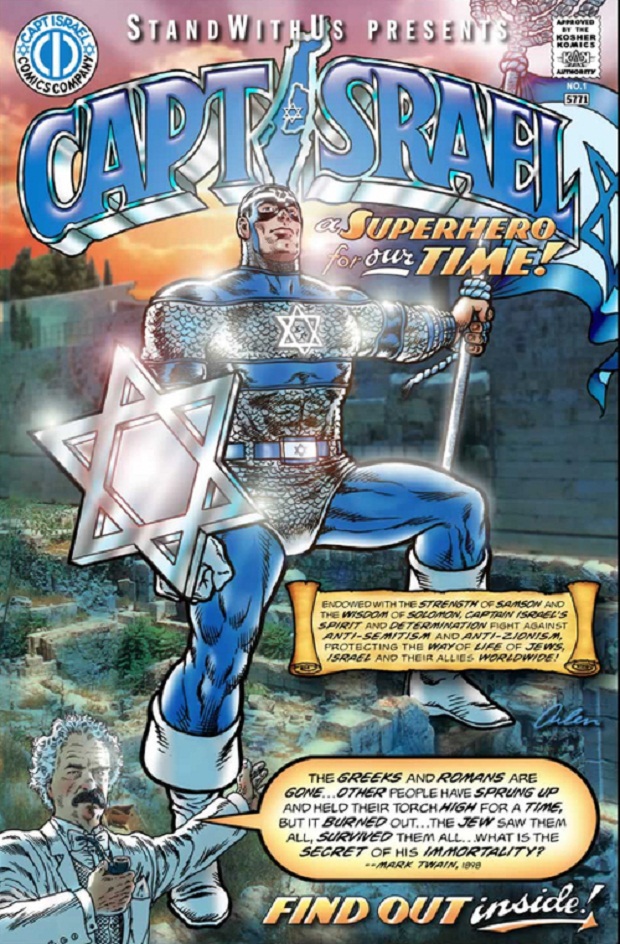 If you thought that Israel is becoming a cartoon, you are not that far off. The good folks at the “pro-Israeli” group Stand With Us have brought us a new superhero comics (for children!) and the name of their protagonist is Captain Israel (Captain Originality was already taken).

Captain Israel is no one-stater. The I in his Israel has been turned into a map of the country, clearly demarcating the green line. If we take this map to be the Captain’s vision of the final settlement to the conflict, we will discover that he goes far beyond former PM Olmert’s “generous” offer to the Palestinians.  The fearless warrior seemingly pooh-poohs even such modest demands as territorial exchanges, faithfully sticking to Israel’s internationally recognized borders. Only his solution for Jerusalem is obscured, quite literally, by a gigantic Star of David, signifying both his patriotism and his embrace, perhaps, of an Israeli-Palestinian confederacy?  Just so that you will not (or will) be confused, I counted at least five such stars in the image (in his name, his shield, his belt, his chest emblem and his flag).

Although the top right corner of the image states that he is approved by the “Kosher Komics Authority” (currently engaged in a bitter feud with the CSA, the Correct Spelling Authority), there are other worrying signs of moderation which impugn the junior officer’s Zionist credentials (in Israel, a senior officer is only a Major and upwards). First, there is the Hebrew letter Shin, adorning his forehead.  While it could be a hint for Shin Bet, it is more likely to be short for Shalom, a word he also uses to conclude the invitation to visit his website. Shalom, as we all know, can also mean peace. Enough said.

Even worse, this “superhero for our times” is said to possess the Strength of Samson and the Wisdom of Solomon. Both of these biblical heroes consorted with foreign women. Could Mr. Israel (as he is known in civilian life) be hanging with shikses? What would the rabbis say? (Answer: they would say, it is OK, he is a man).

If you thought Captain Israel defends our borders from enemy attack, or foils terrorist attacks on innocent civilians, you’ve got another thing coming. No, he is right now on the delegetimization beat, fighting the “venomous” BDS movement, which stands not for Boycott, Divestment and Sanctions (those, I guess, are sort of OK), but for Bigotry, Divisiveness and Slander. Captain Israel is against bigotry?! I told you he must be dating shikses. That meretznik putz. Where are the real Israeli patriots when you need them?