Support for groups like JVP has grown significantly since the latest war against Gaza. Disenfranchising this ever-growing segment of concerned American Jews will only escalate the decline in our community. 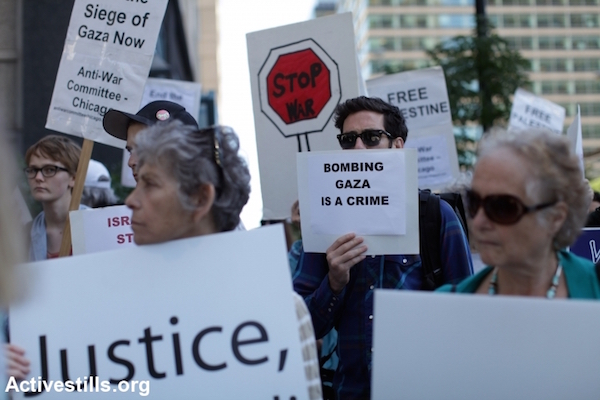 A protest condemning the Israeli assault on Gaza outside the Israeli consulate in downtown Chicago, July 16, 2014. (Photo by Tess Scheflan/Activestills.org)

The past year has seen increasing efforts within the American Jewish community to censor anybody who believes that boycott, divestment and sanctions (BDS) are the way to end the occupation — censorship that is most often targeted at Jewish Voice for Peace. And yet, JVP continues to grow.

JVP is not anti-Israel, it is anti-occupation. Our belief that that the people living in Israel-Palestine are the ones who must decide on their own political formulations does not negate that we are committed Jews acting according to Jewish teachings of how to treat your neighbors. We support any solution that fully recognizes and respects the human rights and aspirations of both peoples — and that includes people with varying political visions for the end of the conflict.

Within JVP I have met many people who like me think that a two-state solution is best, many who believe in a single state with strong guarantees for all, and an increasing number who would like to see a two-state solution but believe that Israel has closed that door in the last few years.

Read also: ‘As U.S. Jews, we need to figure out what leverage we have in ending the occupation’

Whenever I have expressed my support for a two-state solution to JVP members, responses have always been respectful. I have never been shut down, accused of being anti-Palestinian or called names. Yet some of my Jewish friends have totally cut me off, refuse to interact with me online or in person and have called me a traitor, accused me of ignoring the Holocaust or called me names that I won’t repeat. I expected some pushback and honest debate, but censorship and alienation are dangerous to the future of the American Jewish community.

In recent weeks we have seen enhanced efforts by AIPAC to circumvent the Obama administration, as well as increased fundraising in the U.S. by settler organizations like Elad to evict Palestinians from their homes in Jerusalem. To me these groups are the real danger to Israel’s future, not Jewish Voice for Peace.

Last spring, writing in +972 I explained my decision to support JVP:

There is no longer any doubt that Israel has become addicted to settlements, occupation of Palestinian territory and to treating the 23 percent of Israelis who are not Jewish as second class citizens.

Many of us have friends or family who suffer from addiction, and all-too-often it is only when we cut them off, stop enabling their negative behavior that things can actually change. It is that model of “tough love” that led me to become a strong BDS supporter.

The Jewish community’s efforts to censor JVP’s ideas and to exclude JVP members are alienating large numbers of American Jews, especially college students and young adults. Last year’s Pew Center Study reported that 48 percent of Jewish Americans don’t think Israel is making a sincere attempt to make peace. A quarter of all Jews ages 18-29 believes the U.S. is too supportive of Israel. The next iteration of this study is sure to show even lower support for Israel’s government.

It is sad to see that our Jewish tradition of learning through debate and respecting opposing opinions has completely shut down regarding Israel. JVP, J Street, ACRI and the New Israel Fund are all victims of this censorship – but it hits JVP members the hardest because we are the least welcome.

JVP supports boycott, divestment and sanctions because we believe that this tough love approach is the only way to bring both sides together on an equal footing to end the occupation. Israel is afraid of BDS because it works, and because deep down Israeli leaders know that the occupation and the settlements are wrong.

Support for JVP has grown significantly since the latest war against Gaza. With 36 percent growth in online supporters we are now larger than J Street. Disenfranchising this ever-growing group of concerned American Jews will only escalate the decline in our community.

The future of our American Jewish Community and the future of Israel as a democracy depend on openness and full debate of tough issues.

Related:
‘U.S. Jews: Figure out what leverage we have in ending the occupation’
At Open Hillel conference, Jews demand their spot at the communal table
‘Open Hillel’ seeks to redefine U.S. Jewish debate on Israel-Palestine

Seth Morrison has held leadership posts in various local, regional and national Jewish organizations starting in college as a youth leader in Young Judea. In 2011 Mr. Morrison resigned from the Washington DC Board of the Jewish National Fund in protest over repeated evictions of Palestinians from their homes in East Jerusalem. He is also active in LGBTQ organizations and local politics in Northern Virginia. Professionally Morrison is a consultant specializing in marketing and strategic planning.