Yair Lapid isn’t sure which Palestinians he wants to separate from or even how many of them there are, but he knows he needs a bigger wall to do it. 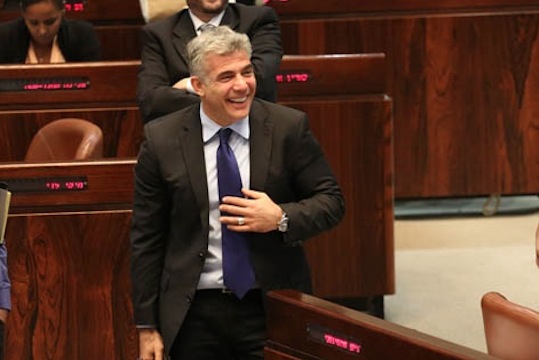 Now is the time to get the Palestinians completely out of the lives of Israelis, according to Yair Lapid, head of the Yesh Atid (“There is a Future”) party. The self-declared “centrist” politician called for a bigger, stronger wall to separate Palestinians from Israelis — urgently.

Lapid made his remarks during an October 3 video interview he gave to Ynet, Israel’s most popular online news site. A generous +972 reader volunteered to subtitle the clip, which is embedded below.

In remarks that strongly echoed those made by Prime Minister Benjamin Netanyahu in his notorious race-baiting election day video (“hordes of Palestinians are coming out to the ballot box”), Lapid says in the interview, “The next stage of the current conflict is not the knife but the ballot box.” He adds, “If 300,000 East Jerusalem Palestinians go cast their ballots in the next municipal elections…we’ll have a Palestinian mayor who will decide on the prayer times at both the Western Wall and on the Temple Mount.”

East Jerusalem Palestinians have the legal right to vote in Jerusalem municipal elections, but most choose not to because it amounts to a de facto recognition of Israeli sovereignty over the part of the city that was captured in 1967. Israel’s position is that it has annexed East Jerusalem, a move that is not recognized internationally. For Palestinians, East Jerusalem is meant to be the capital of their future state.

It’s not clear who Lapid is referring to with the term “the Palestinians.” Does he mean all the Palestinians, including those who comprise 20 percent of citizens of the state of Israel? Or perhaps he just doesn’t know how to count. He mentions 3.5 million, but there are actually about 5 million Palestinians currently living in territory that is completely controlled by Israel — roughly 2.5 million in the West Bank, 250,000 in East Jerusalem and about 2 million who are citizens of Israel. There are another nearly 2 million in Gaza, which is remotely controlled by Israel. So, altogether, we are talking about almost 7 million Palestinians living under Israeli jurisdiction. If Lapid is referring only to those who live in the West Bank and East Jerusalem, he is still off by about 750,000.

But no, he insists in the interview, he’s not afraid of demographics. Nor is he afraid of “Hamastan” — which, he adds parenthetically, frightens the Palestinian Authority even more than it does the Israelis. No, says Lapid, he just doesn’t want Palestinians with knives running around the streets of Israel.

He ignores the fact that some of the stabbing incidents that occurred over the past month were committed by citizens of Israel, and glosses over the reality that separating East and West Jerusalem with a wall is practically impossible, due to the locations of the settlements — not to mention absurd. Is he suggesting that we go back to pre-1967 days, perhaps re-build the Mandelbaum Gate and have international forces monitor it?

It’s difficult to take Lapid seriously, but the interviewer, Attila Somfalvi, maintains a poker face. Ron Ben Yishai, a veteran Israeli journalist, leans across the table and asks politely what Lapid’s plan is for separating from the Palestinians. Is he suggesting unilateral action?

Oh no, says Lapid. He’s suggesting a plan that would be executed multilaterally, by a P5+1-type group that would include Saudi Arabia, Jordan and Egypt. And, of course, even after the separation plan was carried out, Israel would maintain its military presence in the West Bank to protect Israeli security. He says nothing about the 500,000 Israeli Jewish residents of the West Bank. 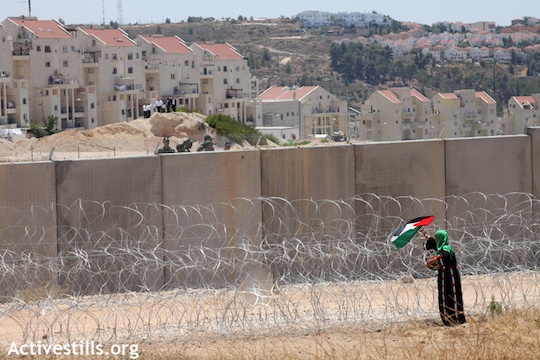 A Palestinian woman leaves a flag on the barbed wire near the separation wall which separates the Israeli settlement of Modi’in Illit from the Palestinian village of Bil’in. (Photo: Anne Paq/ Activestills.org)

Ben Yishai clears his throat delicately before pointing out to Lapid that most experts agree there’s no chance of regional cooperation between Arab states and Israel regarding the Palestinians, and that the Saudis in particular would never get involved in such an undertaking.

Lapid just shakes his head at Ben Yishai and says that he’s already talked to “the Saudis.” And who would “the Saudis” be? It turns out that Lapid is referring to Prince Turki al-Faisal, the retired former Saudi diplomat. But Prince Turki has absolutely no influence with the current Saudi king and is no longer a member of the inner circle.

Bruce Riedel, a Brookings fellow who was a senior advisor on the Middle East to the last four U.S. presidents, explained via email, “Today Turki has [no influence]. He is respected in the Kingdom for his past service but he has no role in decision making. He does not speak for the King. Both he and his late brother Prince Saud were closer to King Abdallah which does not carry positive weight with King Salman.”

This is something that Ben Yishai apparently knows. But the Yesh Atid leader thinks he knows better.

“Ron,” Lapid says, with a patronizing shake of his head to the journalist who has covered Israeli security issues for about 40 years, “I just want to remind you that not only am I a former cabinet minister but I have also served on a security committee. I deal with these things on a daily basis.”

So, to sum up. Lapid wants to build a bigger wall where a wall that is more than twice as high as the Berlin wall already exists. He wants to separate from the Palestinians but keep the army in the West Bank, and he has no plan for the settlers. In other words, he is describing the status quo.

Also, he is not sure which Palestinians he wants to separate from (or how). He’s not worried about the demographic threat but he does not want Palestinians in East Jerusalem to vote because that might interfere with Israel’s ability to maintain a Jewish majority. And he also thinks that Jordan, Egypt and Saudi Arabia would become involved in a multilateral plan headed by Israel to help make the lives of Palestinians even more unbearable than they are now. And he knows this because he talked to one retired Saudi diplomat.

And this, ladies and gentlemen, is the leader of the political party that is often described as the “de facto” opposition to the Netanyahu government.