J14 leader Daphni Leef has been charged with rioting, more than half a year after she was violently arrested during an attempt to reignite the protest movement of the summer of 2011. Her trial will begin on January 23. 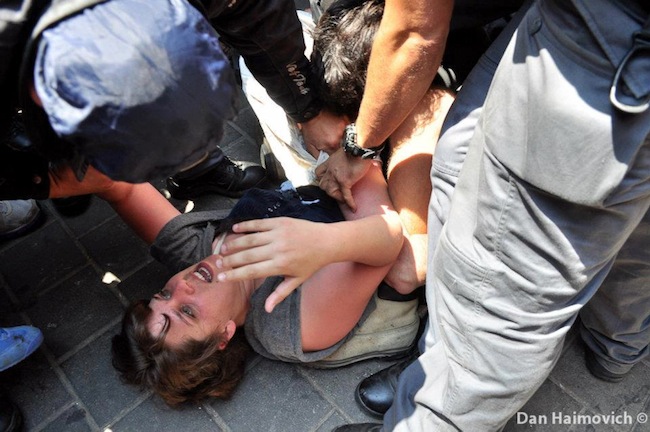 J14 leader Daphni Leef held down on the ground as she is arrested by police officers (photo: Dan Haimovich)

Look at this photo of Daphni Leef. Look at her, thrown at the floor, crushed under uniformed men – uniforms which define them as the guardians of law and order and give them the authority and power to use reasonable strength, allowing them to define what’s reasonable.

Look at them triding on her, pulling her, dragging her, beating her, twisting her hand, breaking her bones.

Read the media reports on the demonstration and her arrest. Read the police response. Feel the outcry and the rage about the blatant lies used by policemen, the injustice in turning the victim into the accused, and the way in which their words are accepted as of truth and justice.

I ask you to remember this photo. Remember how it was reported in the media, remember the police’s response, remember against whom they placed charges.

Next time you read about leftist activist “rioting,” about activists who attack police officers in a demonstration in Jaffa, or Lod, or Sheikh Jarrah, or about disturbances of public order in Bil’in, clashes between soldiers and Palestinian protestors in Nabi Saleh or Nil’in, remember this photo. Remember that the ones who are portrayed by police and media as the rioters, the attackers, the violent ones, are most likely the victims of the situation. Remember that they are the ones who took to the streets to protest injustice, to demonstrate against discrimination and oppression, to oppose the government. Remember that those who represent the law do not necessarily represent truth, and certainly not justice. Remember that the ones who protest for their most basic rights might find themselves crushed under the boots of democracy.

This piece was first published in Hebrew in the blog Radically Blonde.

Leehee Rothschild has been active in the Palestinian struggle for over a decade. She currently works with Anarchists Against the Wall and Boycott From Within.