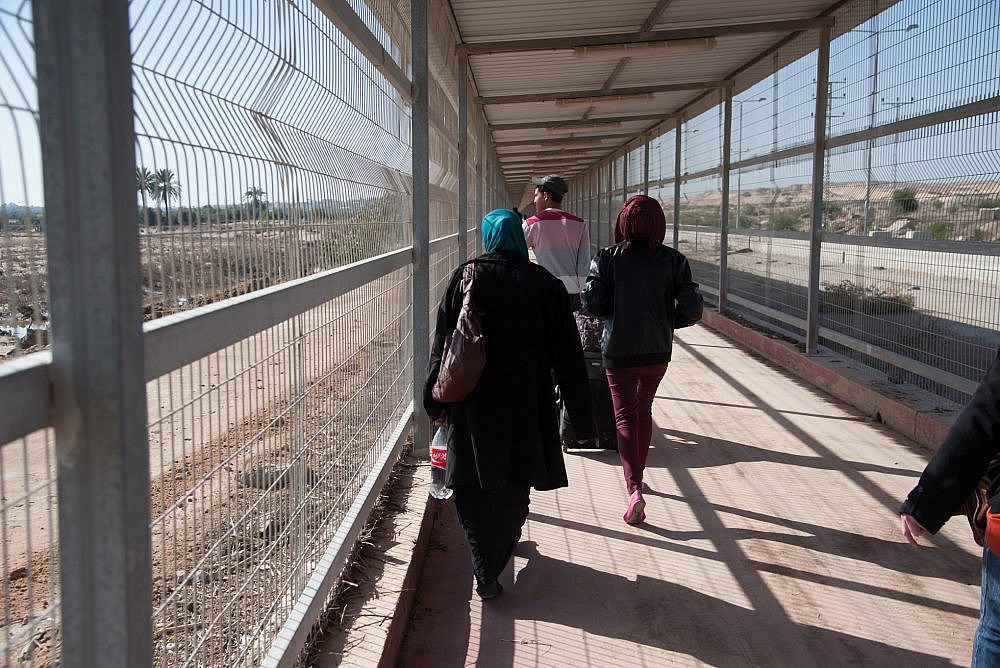 I was stunned by the Erez crossing, the Israeli-controlled checkpoint that leads into the occupied Gaza Strip. The expanse of bullet-proof glass all around me, as I passed through the checkpoint on a recent trip, made me think of the stock exchange rooms seen on TV. The interior of the checkpoint’s grand new building is minimalist, empty of almost everything except for surveillance cameras, gates operated from the inside, and armed security guards scattered around.

Walking into the terminal, Palestinians are immediately separated from foreign nationals. Luggage is monitored on a scanner, and travellers’ documents are checked; I placed my COGAT-issued magnetic card on the electronic reader, stared into the iris scanner, and was allowed to pass.

I followed paper signs reading “To Gaza” that hung on the bare walls. I found myself walking down a long corridor that told merciless stories of other travellers: disposable medical supplies and a blood-stained gauze were strewn on the ground, alongside wheelchairs waiting to be pushed.

On the way out, right before leaving Gaza, I felt those glass windows looming over my head, watching over the invasive body checks forcefully conducted on each traveller; men and women, young and old, were made to stand with their legs wide open, arms up, and hands near their ears while they were examined by a body scanner.

Once cleared, I waited on the other side to reunite with my luggage and my hand bag. It had been thoroughly searched, with my clothes and personal items, including my phone and tiny hand sanitizer, clearly taken out of the bags and hastily put back. This is where the enforcement of the list of items banned from entering Gaza, including toothpaste and shampoo, kicks in. It was why I made sure there was nothing other than clothes in my bag — no deodorant, sunscreen, or the chamomile tea bags I like to carry whenever I travel. 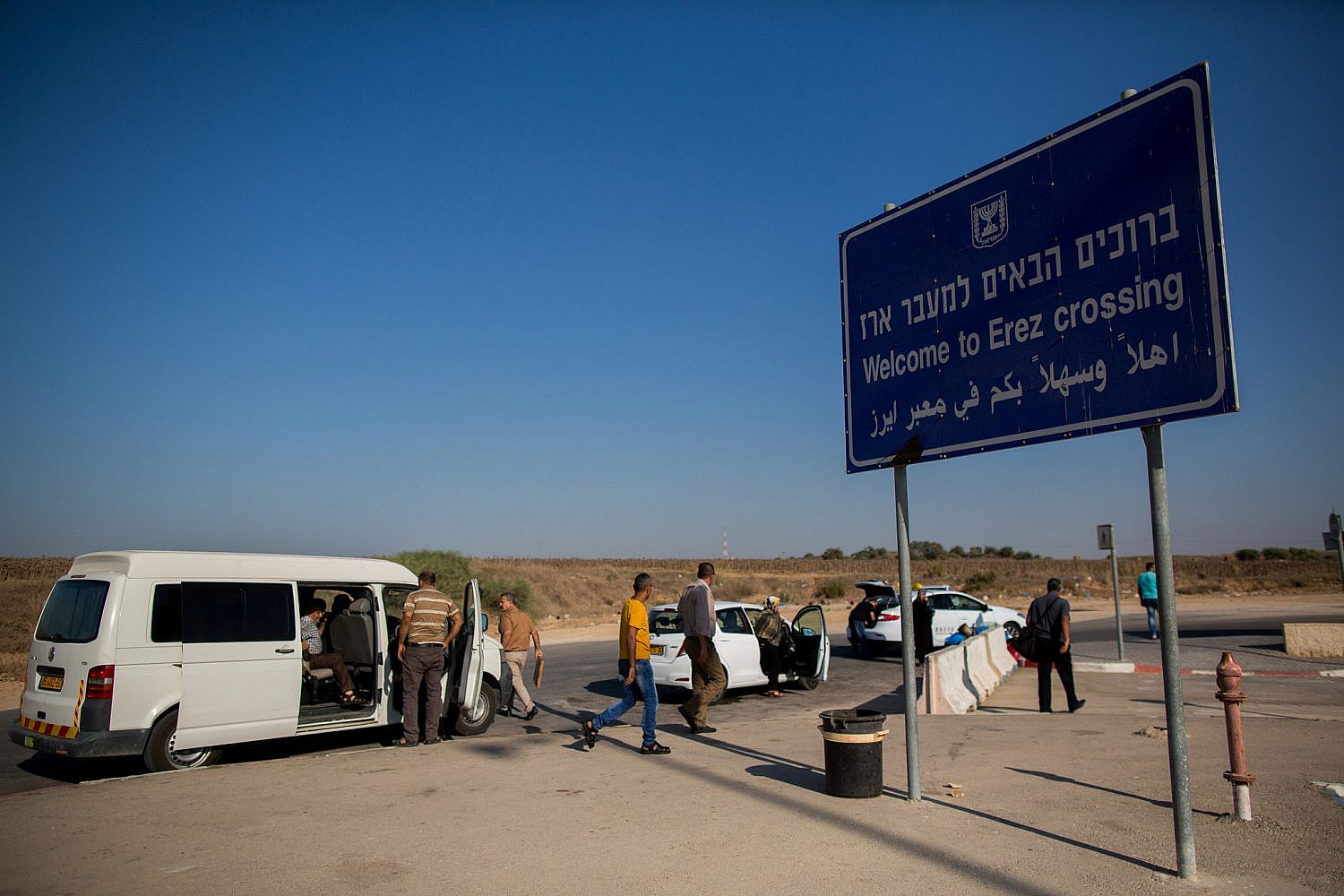 Palestinians arrive to cross into Gaza at the Erez Crossing between Israel and Gaza, September 3, 2015. (Yonatan Sindel/Flash90)

In addition to the Israeli inspectors at Erez, there are two other stops on the way into and out of Gaza: one run by the Fatah-led Palestinian Authority, called “5-5,” named after the code given to the coordination calls between the PA and Israelis at the crossing; and another one run by the Hamas authorities, which was given the name “4-4.” It was a surreal arrangement of facades to create the impression of control. It was also the first time I had come face-to-face with this element of the intra-Palestinian political division, which began in 2007 shortly after the last Palestinian general elections. I thought I knew all about this division, but seeing it at the crossing still slapped me in the face.

The table that exposes everything about us

As a millennial born in the 1980s, I saw in Erez the story of how much the Israeli checkpoint, this structure of domination, has evolved over the years. The maze of short doors, watched and controlled by hawk eyes hiding behind glass windows, reminded me of the corridors of Allenby Bridge, the crossing between Jordan and the occupied West Bank. They were more like tunnels for short children, with orange doors and curtains concealing tiny waiting rooms.

Every summer as a child, while my family lived in exile by choice — my late father, though, was exiled by force — we would travel from Sharjah in the United Arab Emirates to Amman in Jordan, then on to Jericho in the West Bank. This yearly tradition created a trail of memories, merging the airport security procedures with the matrix of security checks in those orange tunnels at Allenby.

My friends and family, including my mother — who almost single-handedly orchestrated these trips — still have strong memories of passing through those crossings in the 1980s. They told me how, after their passports or IDs were checked by soldiers, Palestinians were sent off to a waiting area where their shoes were taken away for inspection. Their luggage was emptied and scoured on a revolving belt. Then, one by one, travellers were strip-searched in separate rooms. In a third waiting room, a soldier brought the now-inspected shoes in a plastic box, throwing them into a pile of other shoes for travellers to search on their own. 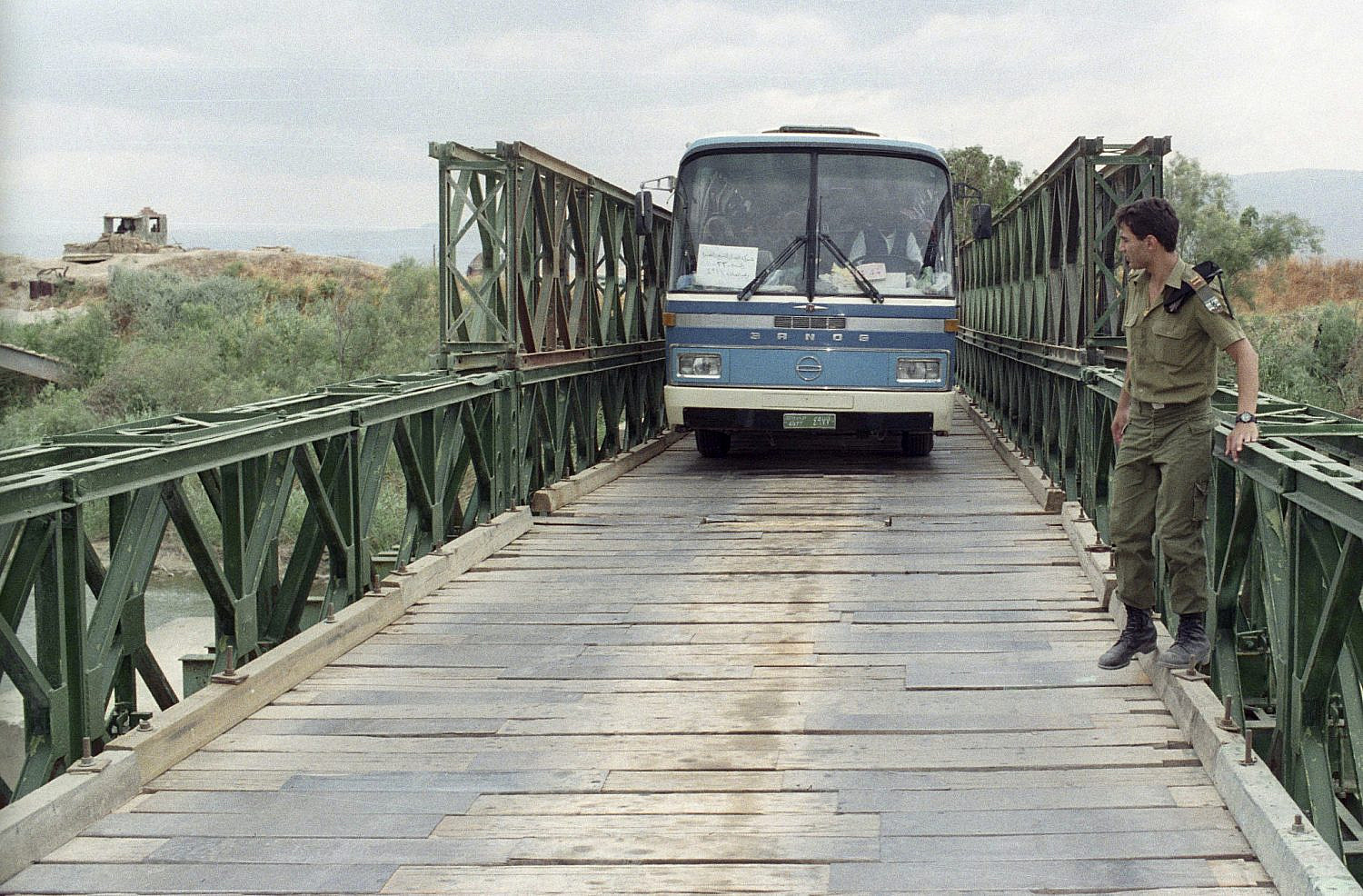 A bus crosses the Allenby Bridge / King Hussein Bridge which connects Jericho in the West Bank to Jordan. (Flash90)

I, too, have many childhood recollections of those checkpoints. I remember being just tall enough to peer over the top of the inspection table on which our belongings were spilled out and hand-searched, while also being able to easily see underneath it. I remember stretching out my hand to grab the coloring pens that the soldiers threw into a plastic box on the ground, which meant we could take them along.

I remember how a marathon t-shirt bearing the Palestinian flag sparked a panic among the soldiers as they searched through our clothes. I remember the sadness on my mother’s face when a jar of honey prepared by my uncle was confiscated and thrown into a basket underneath the table — that table which exposed everything about us Palestinians, from our cherished gifts to our underwear.

A kitschy attempt to smile at the dominated

The Qalandiya checkpoint, which was built between East Jerusalem and Ramallah a few months into the Second Intifada, perhaps underwent the most profound transformation. It originally started as a temporary Israeli military post with a narrow, long-fenced corridor — only fit for sheep, I thought to myself every time I walked through — checking commuters going into East Jerusalem and also all those leaving or entering Ramallah.

Eventually, the soldiers’ stations developed into a stone-built kiosk; the roof, built to provide cover for passing Palestinians from the burning summer sun or pouring winter rain, came later. Soon after came the tall, concrete separation wall, extending from both sides of the checkpoint like a bird’s wings.

When it was completed around 2005, the separation wall at Qalandiya hijacked the “airport neighborhood” that was once home to the Jerusalem Airport, the hub of a Palestinian dream to fly out of the country as we pleased. It also left behind several neighborhoods like Kufr Aqab and Dahiyet al-Barid, then home to about 20,000 Palestinians, who held Jerusalem permanent residency cards yet were now cut off by the concrete barrier. 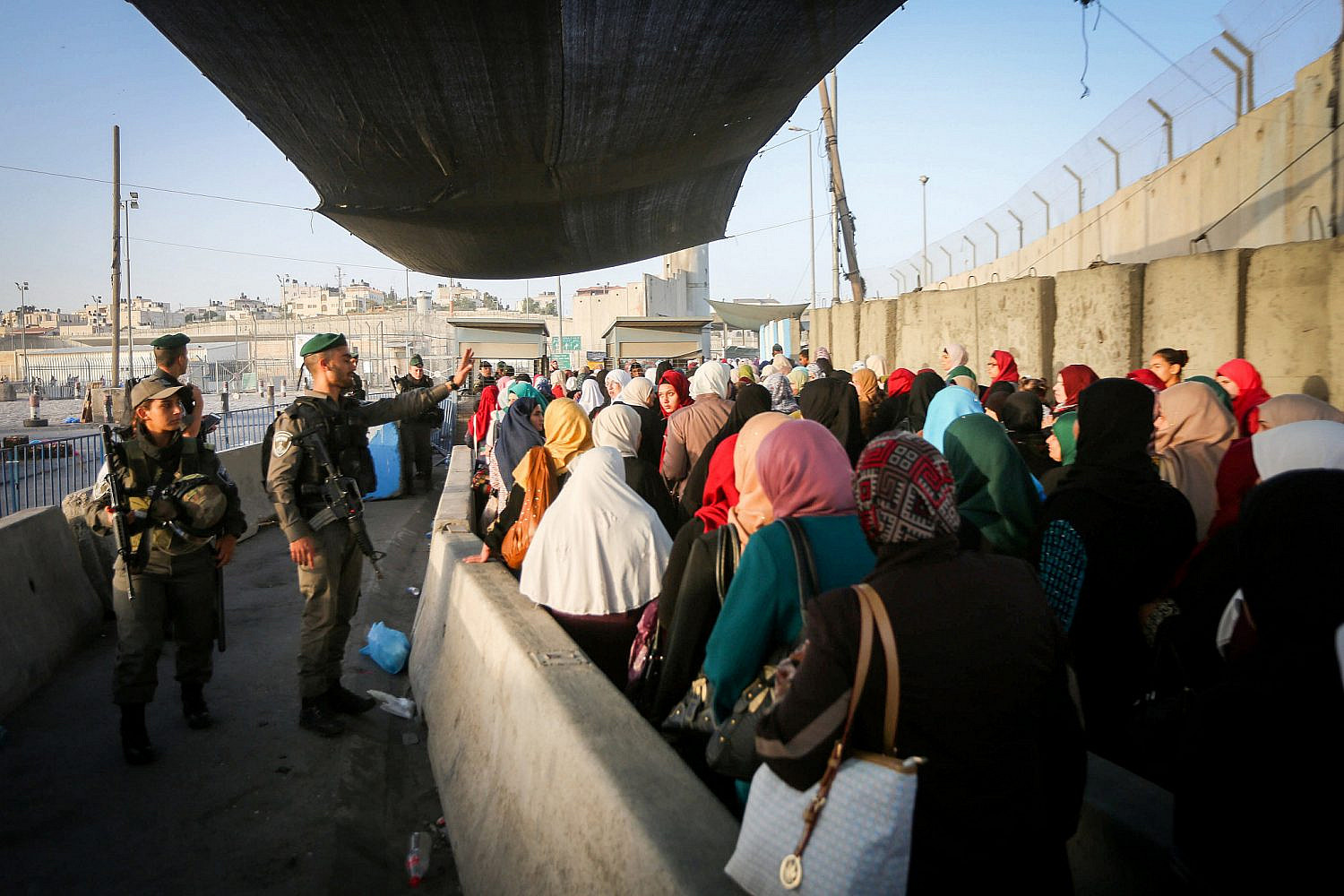 Palestinians cross the Qalandiya checkpoint, outside of the West bank city of Ramallah, on June 9, 2017, to attend the second Friday prayers of the fasting month of Ramadan at Al-Aqsa mosque compound. (Flash90)

Today, Qalandiya has become a grand complex named the “Atarot Crossing.” Like its sister checkpoints, the long outdoor corridors lead to a second maze-like corridor, barely a meter wide, which feeds into a terminal-like building. The crossing is almost constantly packed, or designed to look like it. The Civil Administration, the bureaucratic arm of the occupation, has moved their offices for applicants from the entire Ramallah district area to the checkpoint, adding to the jam.

I can see the soldiers when I cross the checkpoint, and I can see them seeing me. They are sitting behind what seem to be bullet- and sound-proof windows, with no interest in hearing anything I have to say. They speak to us through loudspeakers, mostly unintelligible because of their poor Arabic accent and the low-quality tannoys. If you can’t understand what you need to do, you are left alone to figure it out while the angry and rushed Palestinians, who are also trying to get through this humiliation as quickly as possible, are losing their tempers.

The entire checkpoint is a mental and psychological burden. It is the same whether you go through Kufr Aqab, a Palestinian neighborhood outside of the separation wall yet under Israel’s administration, or Al-Ram, where the Palestinian Authority claims to have some control — both resembling the different shades of chaos and lawlessness under occupation.

This year, the checkpoint was even decorated with Ramadan lights, a kitschy attempt to smile at the dominated. It was another indication of how much Israel’s de jure annexation of occupied territory has become all too clear and gone too far to retract, especially in the minds of the younger Palestinians, to whom the Green Line is little more than an abstract idea.

Walking along memory lane from 1980s Allenby to 2022 Erez, I couldn’t help but think about the evolution of checkpoints and passages. Somehow, subconsciously, the marathon t-shirt emergency, my mother’s eyes on the discarded honey jar, and my longing for those coloring pens overshadowed my preparations for my trip to Gaza. And at Erez, I recognized how, as the Palestinian generational gap grows wider, our collective spatial memory has also been deconstructed. 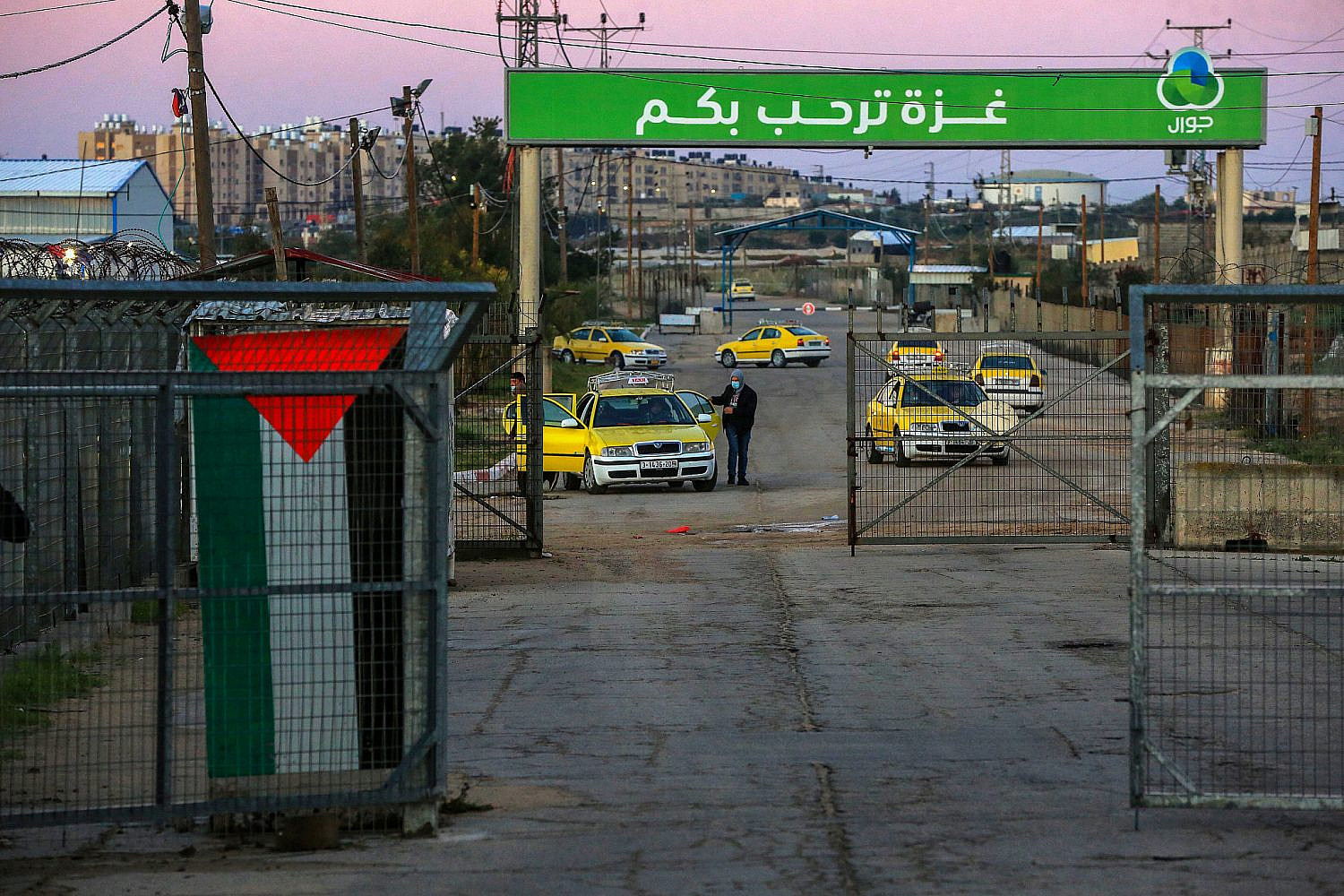 Palestinian workers wait at the Erez crossing in Beit Hanoun, in the northern Gaza Strip, as they wait to enter Israel for work, March 13, 2022. (Attia Muhammed/Flash90)

Walking out of Gaza, it hit me that the intergenerational points of reference inside the enclave — from boomers to Gen Z, with millennials caught in the middle — had been totally destroyed by the blockade.

There is an entire generation of young Palestinians in Gaza, about 1 million under the age of 18, who have lived their entire lives under siege and under the rule of Hamas. One third of that population is under 15 years old, which means that in a few years, over half of the population will have little memory of the strip’s earlier history or the physical landscape that has been gradually destroyed in successive wars. Lacking those memories, they will increasingly have less in common with their parents.

Millennials may be the only generation to remember this link. For our generation, on top of the exhaustion and devastation in Gaza, nothing seems to be enough to describe the ache over the loss of the main landmarks and towers that fell in the last war barely a year ago, except for the emptied spaces where they once stood. All the while, Israel’s checkpoints — despite their constant redesigns — remain standing.

Fatima AbdulKarim is a journalist based in Ramallah. Twitter @FatiabdulFatima