The continued discussion of the almost 13-year-old Al-Dura affair reflects the current Israeli government’s inability to conduct serious and impartial investigations into violations of Palestinian rights. 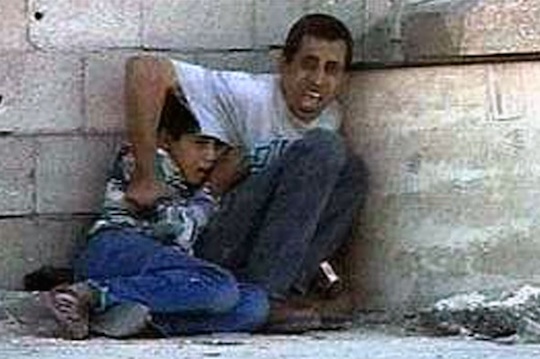 On Wednesday, Philippe Karsenty, a French media analyst, was convicted of defamation for accusing a French television network of orchestrating video footage of the famous shooting of 12-year-old Mohammad al-Dura in Gaza during September 2000. Over the past 13 years, the shooting has been at the center of Israeli nationalist sentiments of victimization, whether by the media, the international community or anyone else that criticizes Israeli policies toward Palestinians.

While the verdict may do little to chip away at Israeli exceptionalism, the incident at least in part helped to intensify the continued discussion of the almost 13-year-old shooting highlights the indifference Israeli officials have toward the calculated destruction of life in Gaza.

Last month, the Israeli prime minister, Benjamin Netanyahu, received an Israeli government report that not only asserted there was no evidence to suggest that Israeli forces shot the boy, but also brazenly claimed the boy probably escaped unscathed. Netanyahu initiated the investigation last year because, in his opinion, the incident had been used repeatedly to slander Israel’s reputation.

Despite the fact that an Israeli general acknowledged that al-Dura had been hit by Israeli gunfire, Minister for International, Intelligence and Strategic Affairs Yuval Steinitz proclaimed the shooting “a modern-day blood libel against the State of Israel.” Speaking at the report’s release, Netanyahu declared that the al-Dura affair was an example of “the ongoing, mendacious campaign to delegitimize Israel” and that “there is only one way to counter lies, and that is through the truth.” He then reiterated, “Only the truth can prevail over lies.” Mr. Netanyahu, let us consider the facts.

Since the outbreak of the second intifada in 2000, Israeli forces are responsible for the death of 1,397 children in the occupied territories, including 1,031 in Gaza, according to evidence collected by Defence for Children International Palestine. At the end of 2012, during the most recent offensive in Gaza, 33 children were killed. Between December 2008 and January 2009, Israeli forces killed at least 353 children, including 26 kids in or near schools. 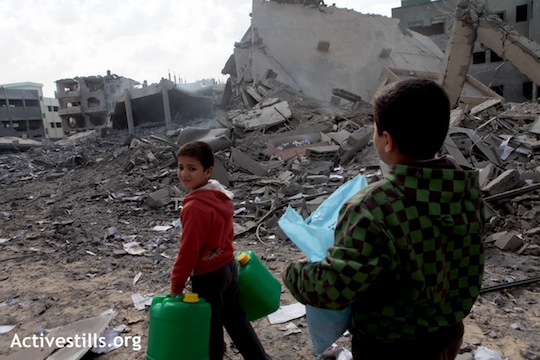 Children walk by the ruins of the Ministry of Interior’s Civil Department building, completely destroyed that morning, in the Tal el Hawa neighbourhood, Gaza city, November 17, 2012. (Photo by: Anne Paq/Activestills.org)

Repeated military offensives on Gaza and a draconian six-year-old blockade have led to persistent allegations of collective punishment of the civilian population, a violation of international humanitarian law.

Nearly a generation of Palestinian children in Gaza have been shot, shelled and bombed since al-Dura’s death. Their homes and schools have been attacked and children have witnessed numerous horrific and tragic events. They have lost parents, siblings, grandparents, aunts, uncles, cousins and neighbors, as well as their own legs, arms and other body parts.

These figures do not include the untold number of children that have died as a result of the dire humanitarian crisis created by the Israeli blockade, including economic collapse and severe poverty, blackouts and power cuts, inadequate medical facilities and supplies and the inability to access clean water.

The al-Dura report shows that the current Israeli government is completely incapable of conducting serious and impartial investigations into violations of Palestinian rights. If nothing else, the report evidences the need for an independent investigatory mechanism like the International Criminal Court to address impunity in the occupied territories. Despite this, Mohammad’s father, Jamal al-Dura, is willing to exhume his own son’s body in order to respond to the claim by the Israeli government. “If Israel agrees, I am ready to open the grave,” he said following the release of the report in late May.

The report is a feeble attempt to squelch al-Dura’s symbolism by completely ignoring the reality of the past 13 years and the reality of the life and death of this child. It does nothing to improve the image of a government that has killed over 1,000 children since 2000. It does not take a “mendacious campaign” to be critical of Israeli policies; it simply requires a glimpse at the facts, and the facts are damning.

The only way for Mr. Netanyahu to address Israel’s “image problem” of a nation that kills children is to stop killing children.

Brad Parker is an attorney and international advocacy officer with Defence for Children International Palestine, an independent child-rights organization dedicated to defending and promoting the rights of children living in the occupied Palestinian territories. Follow them on Twitter and Facebook.