An Israeli university student discusses the process that led him to give his vote to a Palestinian friend without one. 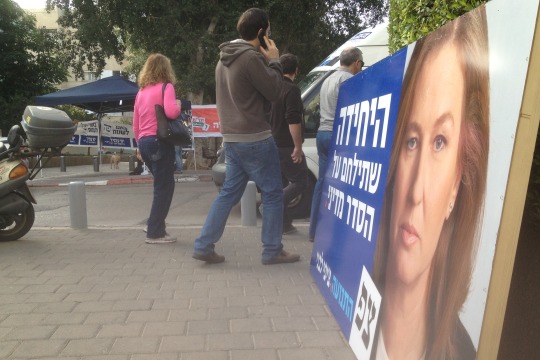 Israelis head to the polls in Tel Aviv amid a sea of campaign posters, January 2013 (photo: Roee Ruttenberg)

As an Israel citizen and believer democracy, I have always cherished my ability to vote. Through last three elections, I have implemented this right with an authentic belief that using it is my responsibility as a citizen and that it has a real effect on my daily life. However, since the last election, I have learned that the right to vote is not a basic right in my country, but a privilege dependent on geography and ethnicity.

I grew up believing that democracy is a form of government in which residents have a say in the decisions that affect their lives. It is a system that is supposed to allow all residents to participate equally in the creation of laws that shape their daily reality and generally presented through the basic right to vote.

Although the Palestinian population of East Jerusalem and the West Bank is highly affected by the Israeli government, its members do not have the ability to shape the decisions that shape their lives.

The two democratic solutions for this distorted situation would be to either build a totally independent system Palestinians or to share with them the right to vote enjoyed by Israelis. But for now, until one of these proposed solutions is formally chosen, the only direct action I can take, as a supporter of the basic idea of electoral democracy, would be to give my right to vote to a Palestinian friend and by thus bring a slight balance to the general condition of discrimination.

As I see it, this is the only practical action that would give this unprivileged population the ability to change the government which affects their daily lives in the upcoming Knesset term. In order to make this action even clearer, I have decided to give this vote to a local East Jerusalemite who is considered, formally, a local resident of Israel and even has the right to vote for local councils. But because of his ethnicity, from childhood, he hasn’t had the option of affecting the shape of the government and its laws.

The option of giving away my vote led me to initiate an interesting discussion with Aziz Abu Sarah. Like in every debate about the elections, it combined interests, ideals about democracy and even practical understandings of the parliament and its electoral system.

Eventually, he chose the Hadash party, which through all of its history has symbolized a joint way of life through cooperation, trust and equity. Thus, generally, I am pleased with Aziz’s decision. Nonetheless, I must say that it was very difficult for me to give him my vote. Although I agree with the party he chose, it was frustrating for me as I understood I wouldn’t have the ability to make a statement in these elections and to have, even symbolically, a direct representative in my parliament.

Even though it was only for one election season, I felt from like a traitor that gave his basic civil right to a foreigner that is considered in some parts even as an enemy, or alternatively as if I was being deprived of my basic right. Anyway, with deep doubts, I asked myself if I wish to do it again in the future.

But before I tried to answer this question about the future, another conclusion about the present came to my mind. The people of East Jerusalem and the Palestinian territories live whole their lives without the basic ability to affect those making decision about their reality. If I felt these negative feelings after only one simple experiment, I can just imagine the amount of difficulty and severe frustration of living my whole life under a government I cannot shape (without even thinking about the other problems that they might face).

This conclusion made me realize the importance of my action even more and lent more certainty to my decision. I chose the option of sharing my privilege in a reality of discrimination in order to create a more balanced reality. But together with that, I understood that the right to vote, especially when it is not given to everyone, is not enough to determine a democracy. Citizens, together with their right to vote and especially in our problematic political situation, must also choose other ways of direct action that confront their reality. Everyone can choose his own way, as long as participation in the system doesn’t end with the right to vote.

Liel Maghen is a political science student at the Hebrew University of Jerusalem. He is giving his vote in Israel’s January 22 Knesset elections to Aziz Abu Sarah.