facebook twitter email link
The housing fiasco is part of a much bigger problem. It’s about the amount Israelis give, and what they get in return. This protest should be about a fundamental change in the way we set our priorities 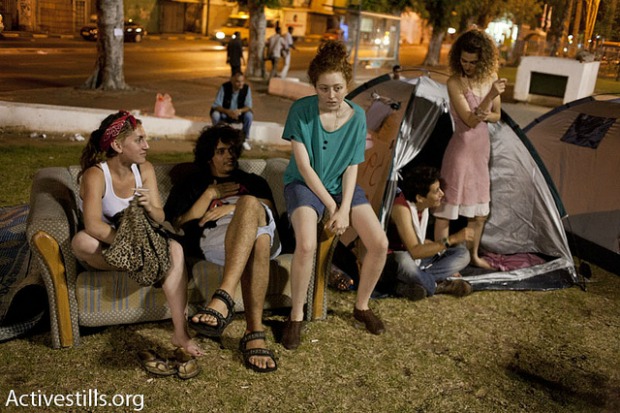 I live with this nagging feeling every day. I wake up with it and go to bed with it at night. And it’s not pleasant, not pleasant at all. And I have no choice.

I have no choice because I know that to buy a basic three-bedroom apartment – not in Tel Aviv, God forbid, but in one of the suburbs – I’ll need a mortgage of over 1 millions shekels (294,000 USD). And for such a mortgage I’ll have to commit to pay the bank 6,000 shekels (1,764 USD) a month every month for at least 25 years. 6,000 shekels for 300 months. I’m terrified to jump into this pool as there’s no guarantee that I’ll be able to pay so much money for such a long time.

And this is precisely the miserable, pathetic bottom line of the tent protests. Just like the cottage cheese protest, it’s obvious that the housing problem is part of a much bigger problem. The root of this problem is probably based in the fact that although I’m young and talented, and I have invested my capital and efforts in gaining my education, the structure of the Israeli labor market in 2011 does not supply me with any job security. Although I love my job very much, no one can guarantee that I will continue to do it for 25 years, certainly not at its current salary level. Some day, let’s say in 10 years, I’ll be too old and too expensive. And then some young whippersnapper will come along, all energetic and talented and cheap. I’ll be replaced, but the mortgage will remain.

2. In order to really understand that the problem of the middle class goes far deeper than the housing problem, we need to really strip away at the problem, and get right down to the root of the matter and peel away the many layers. The first layer is the layer of location. We want to live in a place that’s good for us. Not too far from the family, not too far from the job. Where there’s good education for our kids. Where there’s a cultural life that suits us.

I’ve been living in Jerusalem for seven years. I’ve worked in Tel Aviv for the last two years. I do this because the state, or the free market, does not know how to provide me enough employment opportunities in my hometown. Therefore I fill my gas tank twice a week. I do this because the state hasn’t provided me with suitable public transportation. A fast train between Tel Aviv and Israel’s capital city is an expensive thing, and according to Treasury estimates may not return the investment. So, nothing is done. They drag their feet. They withhold funds. They stall. Meanwhile, let the workers drive their own cars, get stuck in traffic and pollute the air. As long as they buy gas and pay taxes. A lot of taxes.

And to pay taxes, you have to work. A lot. Both parents. And in order to work you have to figure out an arrangement for the kid. But the state hasn’t provided a solution for raising kids at a reasonable price. The tremendous sacrifice that each parent feels each and every morning as he drops his kid at off at daycare or a private kindergarten apparently doesn’t bother the state. It isn’t entered into the budget ledgers. So it doesn’t pay for the state to establish proper frameworks at a normal price for infants. So we pay. A lot. Soon we’ll pay even more.

And these are only the immediate layers: employment, transportation, raising children. That’s without even touching on the issue of the quality of educational, health and cultural services. That’s before we’ve even touched on the issue of the character of the neighborhood, the phenomena of “Orthodoxization” and settlements. All this is in the most basic level of Maslow’s hierarchy of needs.

3. Satisfying these basic needs costs a lot of money, whether due to the helplessness of the state or due to the low level of competition in the various market sectors. Either way, the result is this: we are required to pay a lot, every month, in order to satisfy our basic needs. And this also results in something else: We are required to work a lot. Loads.

If you look at OECD figures recently published, Israel ranks fourth from the bottom out of 34 countries in the organization’s index of work-life balance. The reason for this very clear: We work more, compared to the citizens of other countries, and therefore devote less time to our families and ourselves. We don’t do this because we like to work more than other nations. We do this because the state does not provide us with enough services, because the prices are high, and because we are required to support a large segment of the society that doesn’t work.

So when the prime minister and finance minister gloat over the low employment rate in Israel – and it is indeed low – there’s another side to that figure. Besides the fact that it does not correctly reflect the severe problems of the Israeli labor market, it ignores the fact that despite our working hard, and too much, we do not actually have any job security. Every day is a new day. At any given moment our career could end. At any given moment the company could shut down, or someone could replace us. It’s a constant fear that we live with. In industry, hi-tech, and journalism. Even in the public sector, except for organizations with unions of semi-dictatorial powers.

This fear makes us feel depressed or stressed, but we manage to repress it by working far too long hours. By the by, our ability to see and understand the social and economic procedures that keep this machine alive shrinks to an absolute minimum. And thus, how unfortunate, the circle of absurdity is complete.

4. Therefore there is no way in the world that any housing plan – as brilliant as it may be – will help the middle class. We were told that we would learn, work and succeed. But that was a lie. Or reality has changed. Because it doesn’t matter how educated we are and how hard we work, and even if we manage to save every shekel, the real estate prices will continue to distance themselves from the total of our savings much faster than we can save the money. And this is what the prime minister, and certainly his finance minister, don’t understand, or do not want to understand.

That’s why it’ll be heartbreaking if the current protests end without having a strong political impact. It’s not only about calling for elections. It’s difficult anyway to see anyone in this government who has an interest in new elections, and therefore it won’t happen. It’s about a deep, thoughtful and practical upheaval. It’s about changing our national priorities as they are expressed in the state budget, which is the most important tool the government has to serve its citizens.

In order to truly change the country’s set of priorities everyone must understand that the current system can not be sustained for much longer. This story has been told more than once, but maybe it will finally trickle into the consciousness: there is enough money in the public coffers but it’s invested in extreme inefficiency (as in the education or health sectors) or it is directed to very specific political targets (the settlements) or to non-productive sectors (yeshivas) or the state simply renounces its citizens (by transferring social services to the third sector). These numbers amount to billions of shekels a year.

Just a few percentage points of those sums, if they were invested efficiently in the right places, would allow us to satisfy our needs without having to work so much. And we wouldn’t even mind the taxes then.

Radically changing our set of priorities, which is what the tent protesters are hoping for and calling for and not for some kind of patchwork in the housing sector, cannot happen immediately. It will happen if, and only if, Treasury officials feel comfortable to loosen the purse strings that have been so tightly closed for so long. And this will happen if, and only if they know, the officials, that they can count on the politicians not to turn the budget into a den of thieves, when they are assured that our public officials are responsible for their actions and for our money.

But for that we need to choose our public officials wisely and responsibly.

Shaul Amsterdamski is the head of the News Desk at the Israeli financial daily Calcalist.

This article was published in Calcalist on 27 July, 2011 and is posted with the author’s and Calcalist’s permission.