By Mairav Zonszein and Michael Omer-Man 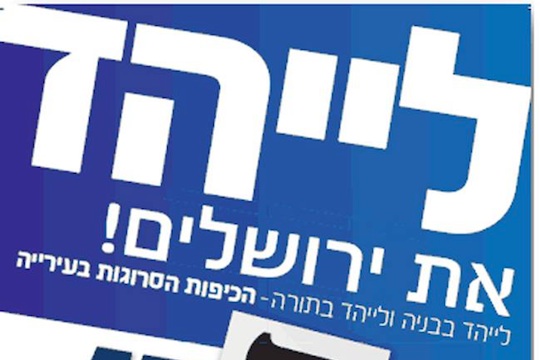 A list of candidates running in the upcoming Jerusalem municipal elections is vying for (Jewish) votes with a slogan calling to “Judaize” the city. The phrase is associated with efforts by Jewish settlers to push Palestinians out of the city’s neighborhoods.

“Judaize Jerusalem,” read signs for the United Jerusalem list, headed Aryeh King, a right-wing settler notorious for trying to claim land for Jews in East Jerusalem. He directs the Israel Land Fund, whose mission is “reclaiming the Land of Israel for the People of Israel.”

Before creating the United Jerusalem List with Shmuel Shakdi of the National Religious Party, King announced his campaign for Jerusalem city council with a party called the ‘Seam Neighborhood List.’

King’s campaign to ‘Judaize Jerusalem’ is not sitting well even with some on the right. Former Knesset speaker and veteran Likud politician Reuven Rivlin called for the elections committee and state prosecutor to investigate whether the slogan, which he called “a disgrace” and “incitement,” constitutes a criminal offense. (Hebrew)