As the Jerusalem municipality is gradually forced to acknowledge a catastrophic shortage of classrooms in the city’s Palestinian districts, it also finds brave new ways to avoid tackling it. 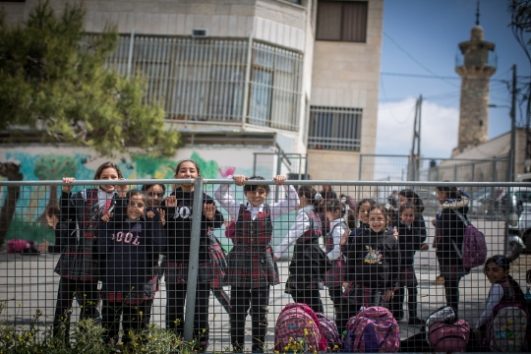 Let’s start with the bottom line: there is a shortage of 2,000 classrooms in East Jerusalem schools. In effect, that means Israel prevents more than 60,000 schoolchildren from their right to free education. About two-thirds of them pay extortionate tuition to sub-standard institutions that are not properly supervised by the authorities. The remaining third have dropped out.

All this, sadly, is not new. Ir Amim publishes annual reports detailing the situation that keeps getting worse despite public campaigns and legal actions. However, this year has ushered a few novelties that are noteworthy.

In other words, even if the figures the municipality flaunts are truthful, its policy has utterly failed. But instead of recognizing failure, the city and the mayor chose to deny reality. Mayor Nir Barkat said three years ago that 400 classrooms had been built in the city’s east, rising to 500 two years ago, and up to 800, “more than six times the number built under the previous mayor,” last year.

There’s only one problem: These figures are completely false. Since 2009, under Barkat’s leadership, a mere 261 classrooms have been built – an average of 37 a year. Under Barkat’s predecessor, Uri Lupolianski, the average was 32 a year. But even irrespective of the current shortage, the natural growth of the population requires 70 new classrooms every year.

For several years, Barkat’s PR machine has managed to paint him as the trailblazer of a new policy with regard to the East Jerusalem education crisis. However, as the crisis only deepens, Barkat now faces backlash from unexpected sources.

Civil society organizations in the city have gradually expanded the scope of their treatment of East Jerusalem, from seeing it strictly as a political issue to a civilian and municipal issue as well. It’s not that it comes without a price: can you tackle inequality effectively, without addressing the clash of national identities, forceful control and violent conflict? Be that as it may, this new approach has introduced several players, some very influential, who previously preferred to wash their hands of East Jerusalem.

West Jerusalem organizations have been more involved in studying education inequality in the city. One prominent example is a petition submitted by the municipal parents’ council last month, seeking to draw City Hall’s and the Education Ministry’s attention to the shortage of classrooms across the city – in ultra-Orthodox schools as well. The parents’ council, an entirely Jewish-Israeli group (East Jerusalem parents have a separate body), and had been traditionally uninterested in the East, until the election of the current chairman, Paz Cohen. Until recently, the petition would be unimaginable.

Approached by Ir Amim, municipality officials admit that our information is correct. For example, the director-general told a Knesset panel last February: “We are facing huge gaps in the Arab sector. We are missing 700 classes in permanent buildings, to subsume the ones we rent, and another 1,300 annually to absorb children from private and unauthorized institutions, and the natural growth stands at three percent annually.” 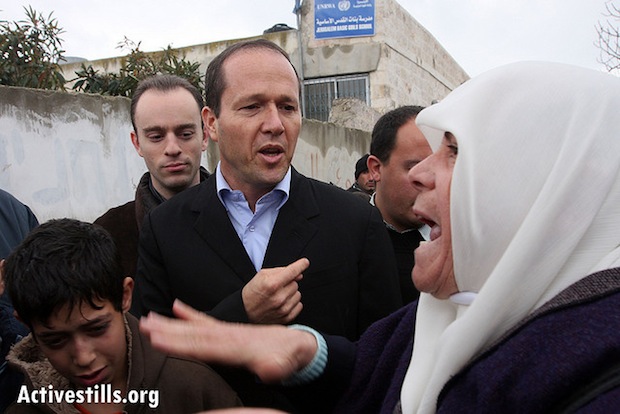 But to the media, the mayor’s PR team would speak in an entirely different tone. When our information is reported, it is always met with a stringent denial.

This is how the entering of new actors into the fray has made an impact. In a press release responding to the parents’ petition, City Hall has publicly admitted that 2,000 classrooms are missing in the East. Criticism of the mayor’s East Jerusalem policy has reached circles that he is less able to ignore.

On the backs of schoolchildren

Even if the situation on the ground remains dire, our ongoing pressure is bound to bear fruit at some point. Among other things, about a year ago the municipality outsourced the locating and planning of classrooms to a private firm, Moria, assuming that it would do it more quickly and effectively.

But, at the same time, the authorities have found a new way to maintain inequality between Israeli and Palestinian schoolchildren in Jerusalem. Following the annexation of East Jerusalem, in 1980, Israel announced it would introduce its national curriculum in Palestinian schools. The plan was met with vocal protest in the form of a protracted strike in the education system in East Jerusalem. After more than a year, the Israeli government conceded and agreed to retain the Jordanian curriculum. This is one of the Palestinians’ sole victories against Israel’s encroachment. This arrangement was maintained in the Oslo Accord, whereby the new Palestinian curriculum replaced the Jordanian one.

In recent years, the Jerusalem Education Directorate has renewed efforts to impose the Israeli curriculum on Palestinian schools. It has proved to be an effective way to duck the real question: whenever the numerous problems of East Jerusalem schools are evoked, the municipal officials divert the discussion to the curriculum. Instead of addressing the slow construction pace, they flaunt the number of schools that have adopted the Israeli curriculum (in reality, it amounts to no more than five percent). The Education Directorate is even vain enough to claim that the high proportion of dropouts derives from the “worthlessness” of the Palestinian matriculation, and not from the fact that they simply have nowhere to learn.

This is yet another example of how right-wing politicians further their agenda on the back of children. But more than a national agenda, it is proof of a corrupt regime that attempts to absolve itself of its duty to provide children with appropriate education. Against these efforts, we must form an opposition.

We will do our utmost so that ever Palestinian child in Jerusalem will have a place to learn, despite the government’s scheming.

Aviv Tatarsky is a researcher for Ir Amim (“City of Nations”), an NGO promoting an equitable and stable Jerusalem with an agreed political future. This article was originally published in Hebrew on Local Call. Read it here.