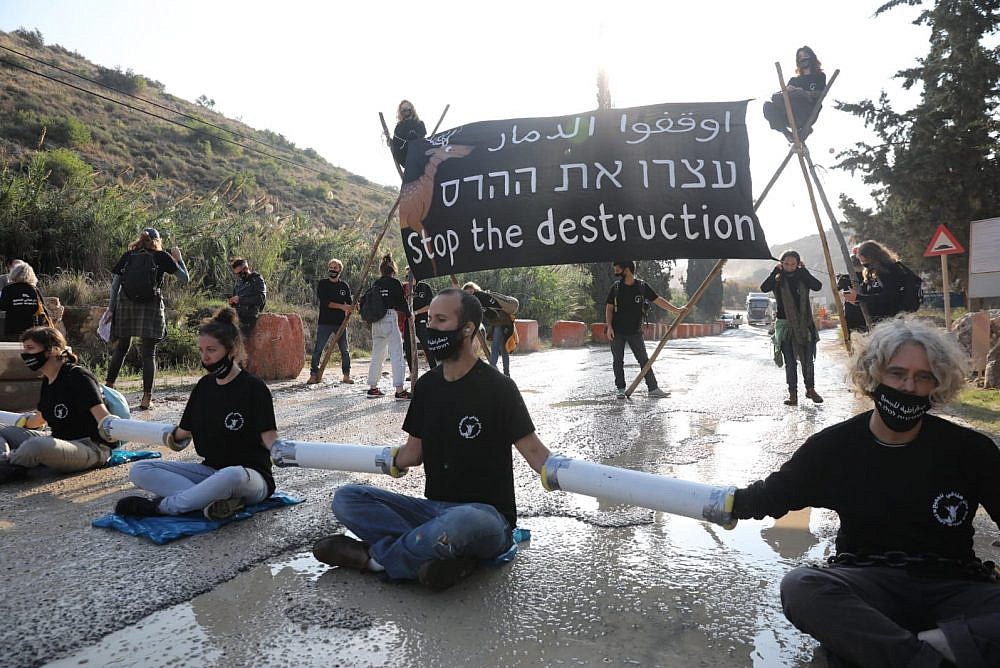 Israeli climate and human rights activists chain themselves to the entrance of HeidelbergCement quarry in the occupied West Bank to protest a government plan to expand the quarry and build an industrial zone nearby, November 22, 2020. (Oren Ziv)

Dozens of climate justice and human rights activists blocked the entrance to an Israeli quarry in the occupied West Bank Sunday morning to protest a plan to build a new industrial zone in the area. According to the protesters, the expansion plan of the HeidelbergCement Quarry, which will also include the building of a new Israeli cemetery, will destroy the ecological corridor of the center of the country and deepen the annexation of the West Bank.

The activists, which belong to the “One Climate” group, chained themselves to the entry of the quarry and unfurled a giant sign that read “Stop the Destruction,” while preventing the entry and exit of trucks transporting cement across the country. The action caused a large traffic jam of trucks outside the quarry, with one driver estimating that the protest led to over NIS 100,000 in losses for the company.

Meanwhile, they handed out flyers to passersby, including Palestinian cement truck drivers who stood in solidarity with the protestors. After three hours of protest, police officers who had arrived on the scene asked the quarry workers to saw off the demonstrators’ chains. Eight were arrested.

The plan to expand the HeidelbergCement Quarry and build an industrial zone would connect the Israeli settlements of Elkana and Oranit (located to the east of the quarry) with the Israeli city of Rosh HaAyin (to the west of the quarry and inside of the Green Line), thus creating territorial contiguity between Israel and the West Bank. The existing quarry — which is owned and operated by Hanson, an Israeli subsidiary of the German HeidelbergCement company, the second largest producer of cement in the world — is built on land belonging to the Palestinian villages of Deir Balut and al-Zawiya, which was expropriated by the Israeli army in the 1980s.

Because the quarry is located on the “Israeli” side of the separation fence, across from an IDF checkpoint on Route 5, Palestinian activists from the West Bank were unable to take part in the protest. 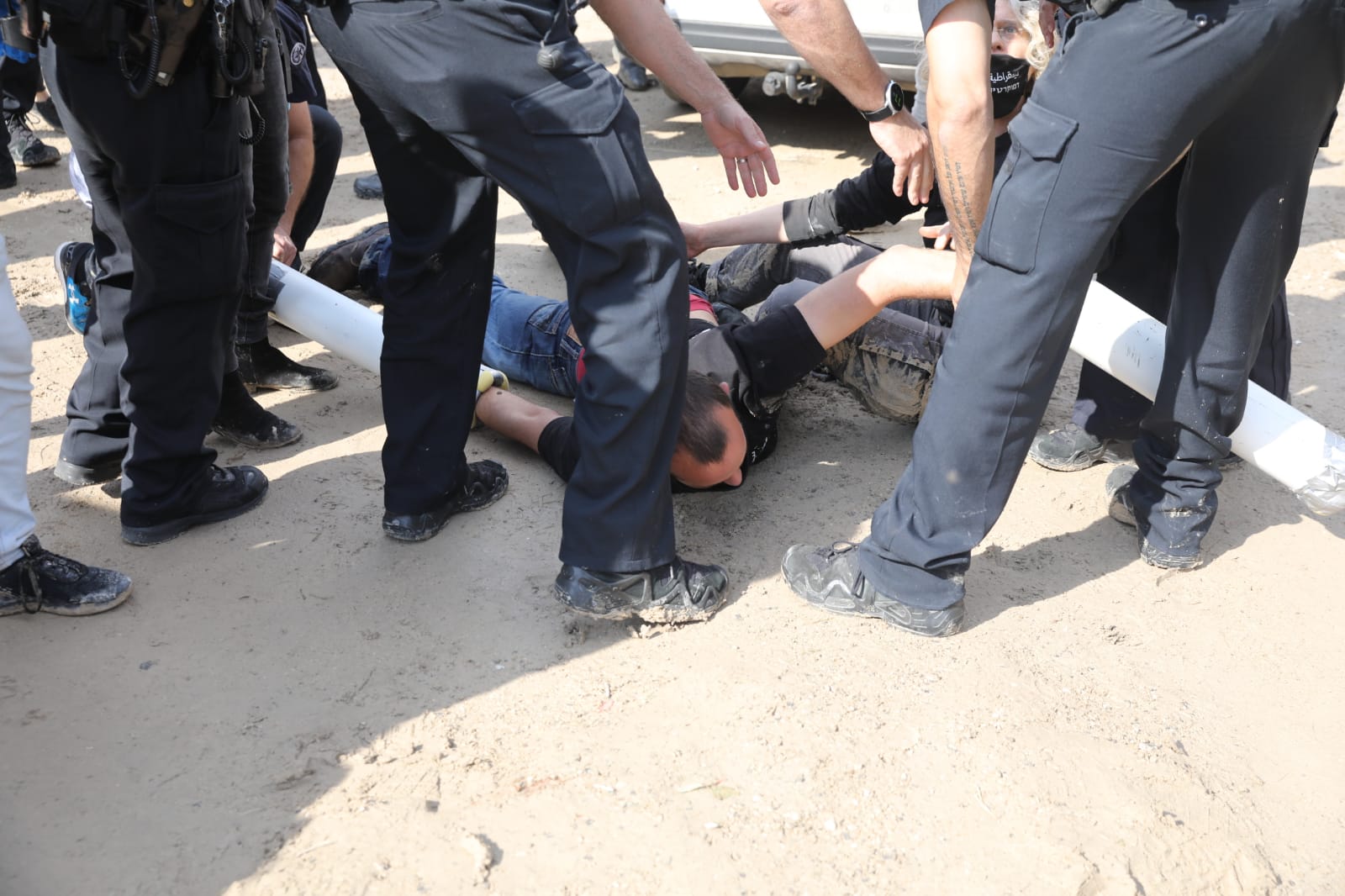 Israeli police arrest climate activists outside the HeidelbergCement quarry in the occupied West Bank during a protest against government plan to expand the quarry and build an industrial zone nearby, November 22, 2020. (Oren Ziv)

“We are here to stop those responsible for the occupation and the climate crisis. We are here to demand climate justice for all who live in this land, humans and animals, Palestinians and Israelis, women and men, from every group, from every identity,” said Ya’ara Peretz, one of the leaders of the action.

The plan to expand the quarry is awaiting approval by the planning commission of the military government in the occupied territories, under the auspices of Defense Minister Benny Gantz.

The demonstrators noted that the theft of natural resources from occupied territory and their transfer into Israeli territory violates international law. ‘These hills also belong to the villages that are east of the separation wall,” Peretz said. “According to international law, the resources here belong to the Palestinians, not to Israel. What we’re seeing here is a double theft. Theft of nature and the environment and theft of Palestinian [land].” Peretz said. 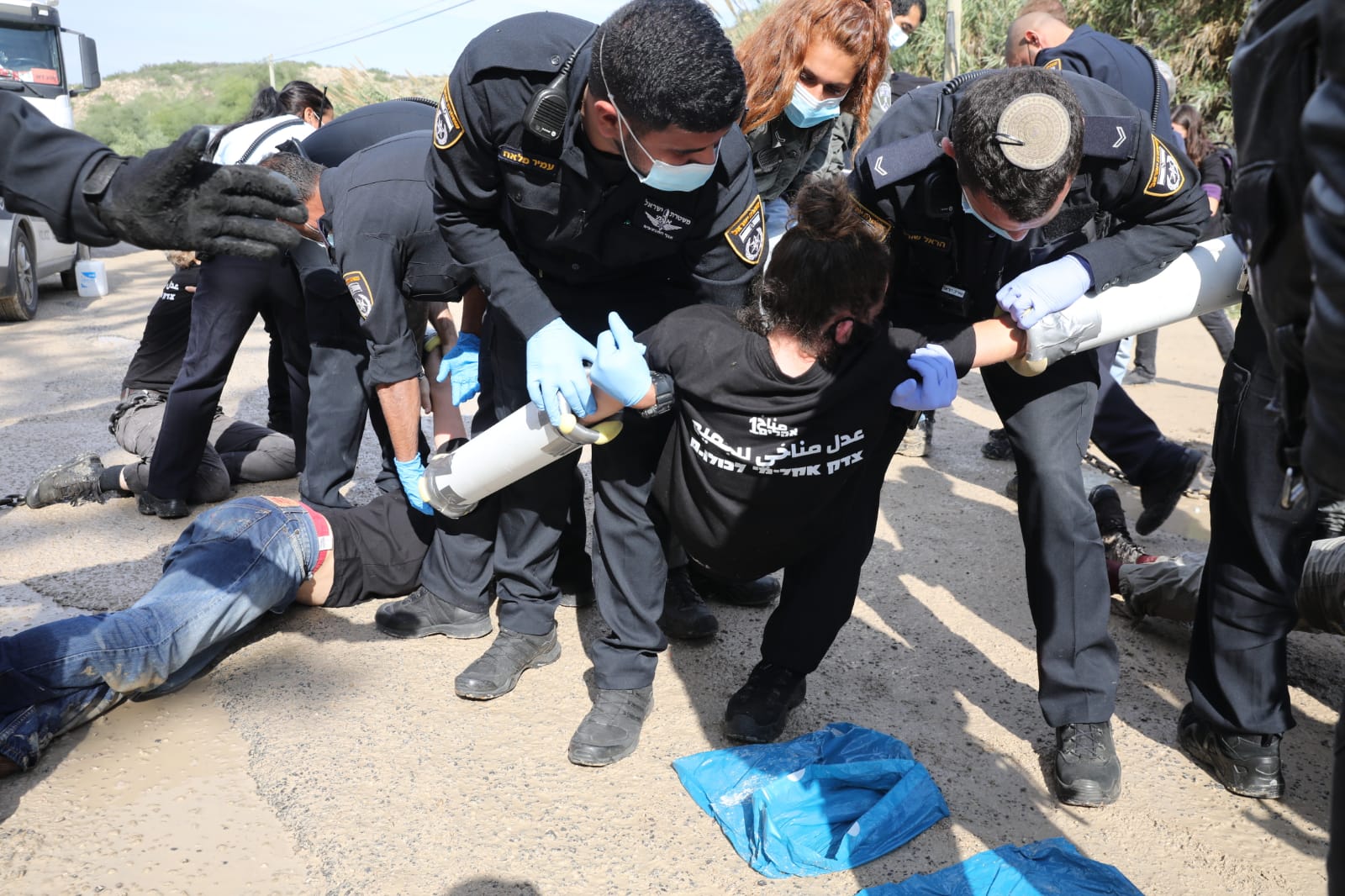 Israeli police arrest climate activists outside the HeidelbergCement quarry in the occupied West Bank during a protest against government plan to expand the quarry and build an industrial zone nearby, November 22, 2020. (Oren Ziv)

“We came to stop the destruction, to make the connection between the occupation and annexation and climate,” said Mor Gilboa, one of the leaders of One Climate, who chained himself to the entrance of the quarry. “The plan to expand the quarry is not only being carries for economic reasons, but also to create contiguity from the settlement of Elkana to Rosh HaAyin,” he said.

The demonstrators added that the hills upon which the quarry is located are part of an ecological corridor in the center of the country that stretches from the West Bank to the coastal plain, and is home to many animals including deer, hyenas, jackals, and wild boars. A number of Israeli environmental organizations, including the Society for the Protection of Nature in Israel, oppose the plan. 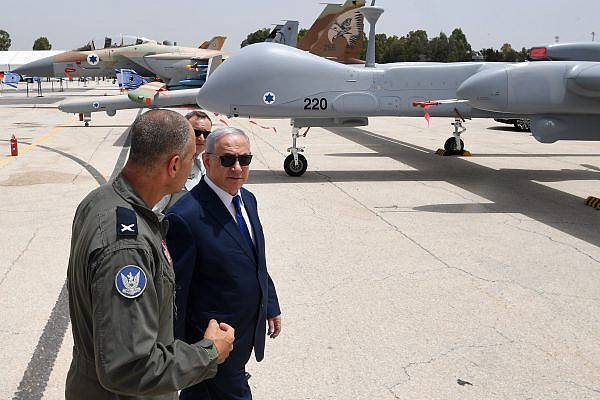 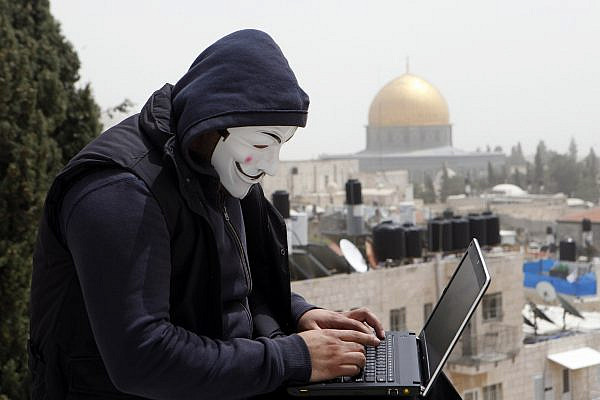 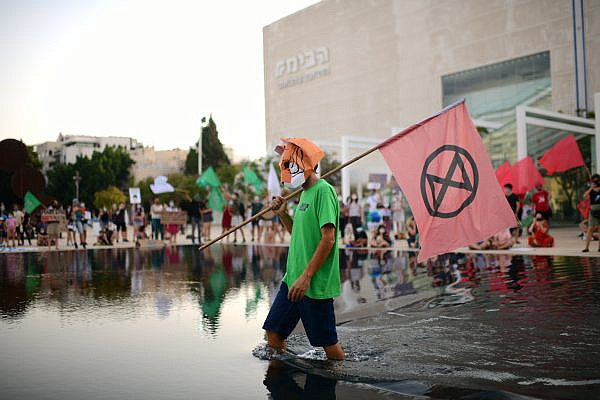