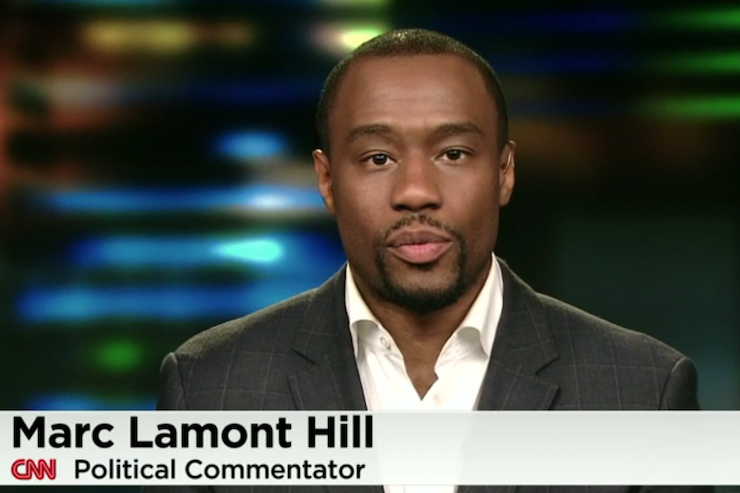 “All the people that live in the West Bank are Israelis. They are not Palestinians. There is no Palestinian. This is Israeli land.” These were the shocking words of former Senator Rick Santorum in 2012, denying the existence of Palestinians, and endorsing Israel’s illegal annexation of the occupied Palestinian territories. Santorum was subsequently hired by CNN as a paid contributor.

By contrast, prominent commentator and Temple University professor Marc Lamont Hill was just fired by CNN for delivering a speech at the UN in solidarity with the Palestinian people, and closing that speech by urging international action “that will give us what justice requires, and that is a free Palestine from the river to the sea.” Could the double-standard be any more glaring?

The backlash to Hill’s comments was instant, reaching the level of deranged hysteria in the case of Washington Examiner executive editor Seth Mandel, who absurdly claimed that Hill was calling for a “Jewish genocide.” Fox News host Ben Shapiro displayed some shameless hypocrisy in expressing outrage at what he deemed an anti-Semitic speech, despite Shapiro himself explicitly calling on Israel to ethnically cleanse the Palestinians (something Hill never even came close to). The right-wing online hysteria proved too much for CNN to bear, so they dropped Hill within hours.

Before getting into the grave consequences of CNN’s decision, it’s important to understand Hill’s comment. Since no honest person could derive anti-Semitism or genocide from a “free Palestine,” I won’t dignify those accusations with a rebuttal. I would simply note that those smears are deliberate attempts to mislead people away from the reality of the injustice Palestinians live today, because this is a debate that opponents of Palestinian rights can no longer win on merits. But because an honest person could read an “anti-Israel” position in Hill’s comment, given that modern Israel is within the “river to the sea” area he refers to, that much is worth addressing.

Israel was created in 1948 on 78 percent of historic Palestine, at the expense of over 700,000 Palestinians who were driven from their homes, and hundreds of Palestinian villages that were destroyed. Later in 1967, Israel captured the remaining 22 percent of Palestine, and the UN called on Israel to end the occupation of those territories.

Having long fought to restore their entire historic homeland, the Palestinians made a major compromise in the late 1980s, recognizing Israel on 78 percent of the land, as accepted by the UN, and settling for a Palestinian state in the occupied territories. The world rejoiced as the elusive two-state solution finally seemed inevitable.

Except there was one problem: instead of ending the occupation, Israel kept building illegal settlements on Palestinian lands. Today, nearly 750,000 settlers live in the occupied territories, and some of the settlements are major cities. The extent of Israel’s colonization of the Palestinian territories, in violation of international law and to the condemnation of the whole world, made a viable Palestinian state practically impossible. In other words, Israel used force to kill the two-state solution, and guarantee a one-state outcome.

As Israel’s rejection of the Palestinian compromise leaves us with a one-state reality between the river and the sea, the question we confront today is: what kind of one-state should this be? Should it be one where everyone is treated equally or not?

In the one-state reality that exists today, the Israeli government is the primary authority in charge. Jewish citizens of Israel live in a liberal democracy, while Palestinians are divided into many groups: citizens of Israel with partial rights, occupied people in the West Bank and Jerusalem with hardly any rights, and prisoners in Gaza with no rights. Put more bluntly, Palestinians live under Israeli apartheid.

Israeli prime minister Benjamin Netanyahu, who opposes Palestinian independence or statehood, is further entrenching this one-state apartheid. What people like Marc Lamont Hill object to isn’t the one-state reality that Israel imposed on the land, but the discriminatory nature of that state.

It is true, of course, that a single state with equal rights for all would no longer be a Jewish state. But this is no more a destruction of Israel, as some claim, than the end of Jim Crow segregation in the United States was the destruction of America. We’re not talking about destruction, but simply a transformation of the kind of state we have — and that’s precisely what Hill’s comments referred to.

To oppose Hill’s vision of freedom and equality without simultaneously opposing Israel’s occupation of the Palestinian territories is effectively an endorsement of apartheid. And what is disturbing is that we live in a political moment where endorsing that apartheid is considered normal in our public discourse, while promoting full equality is considered a taboo deserving of panic, shunning and even firing.

The damage wasn’t just done to Hill’s reputation and career — it goes far beyond that. CNN’s decision to fire Hill chills freedom of thought. It contributes to an already suffocating environment in which commentators avoid speaking honestly about Israel’s abuse of Palestinians because it is so frequently punished in a variety of ways. Suppression of advocacy for Palestinian rights in the United States goes back decades, and the current iteration of this suppression campaign isn’t just about career consequences — there are efforts underway to formalize punishments for Palestine advocacy.

While boycotts are protected political expression under the First Amendment, Congress is considering a bill to criminalize boycotts of Israel in America. There are also efforts to expand the definition of anti-Semitism to include criticism of Israel, a transparent attempt to chill campus activism on Palestine. Thankfully, civil rights groups, including the ACLU, are fighting back against both measures, but the battle to speak freely about the Israeli-Palestinian conflict remains potentially the biggest free speech challenge of our generation.

The United States enables Israel’s oppression of Palestinians by the endless billions of dollars it gives to Israel in military aid, and the unconditional diplomatic cover it offers at the United Nations. We in the United States have a moral responsibility to speak out against this injustice. Defenders of Israel’s oppression of Palestinians scored a point by smearing their way into getting Hill fired from CNN. But it doesn’t end here, because there is a growing movement that will defy these intimidation tactics, and will continue speaking truth to power.

Omar Baddar is the Deputy Director of the Washington-based Arab American Institute. He is a political analyst specializing in US-Middle East policy, with a particular emphasis on the Israeli-Palestinian conflict.