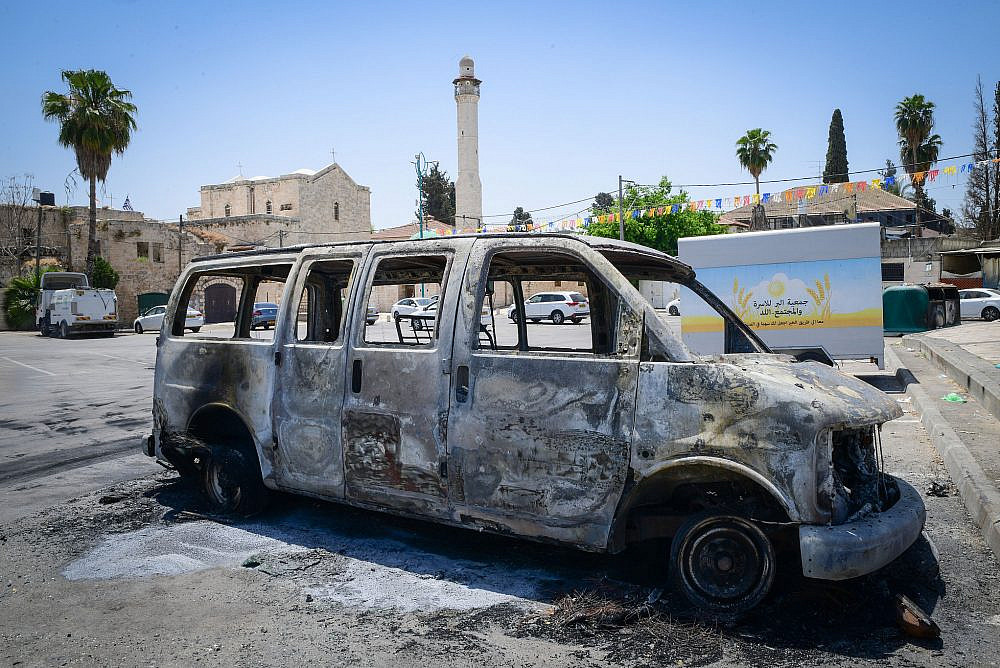 Torched synagogues and cars and vandalized stores in the central city of Lod, following a night of riots in the city, May 12, 2021. (Avshalom Sassoni/Flash90)

Palestinian citizens of Israel have grown accustomed to hearing ridiculous statements from Israeli mainstream media and politicians. Their lack of knowledge about Palestinian society and the lies they spew on national television are not only far beneath journalistic standards, they are often plain ludicrous and very non-journalistic.

But over the last few weeks, even by their standard, the horror-comedy show that is Israeli TV has outdone itself. As violence raged across the country, in Jerusalem, Gaza, and the so-called “mixed cities,” mainstream presenters lashed out at Arab guests on their shows, interrupting their responses. Some anchors actively incited against Palestinian demonstrators, while politicians from the Israeli left publicly backed the onslaught in Gaza.

As if they are oblivious to their own incitement against Palestinians these past two weeks — some of the more prominent broadcasters actually called for shooting us on sight — all of a sudden, everyone is talking about “bringing back coexistence to our streets.” These statements are not only hypocritical, they expose the main reason why there has never been real “coexistence” between Jewish and Palestinian citizens. So how can they mourn something that never existed? Why are Jewish Israelis suddenly mourning the loss of an imagined utopia?

It’s simple: in their minds, it actually did exist.

The media routinely ignores the hardships of Palestinian society. Israelis have no idea that many Palestinians in Lyd have had to build their houses on their own land without the necessary permits, because the authorities refuse to give those permits while preventing the expansion of Palestinian neighborhoods and demolishing existing homes. 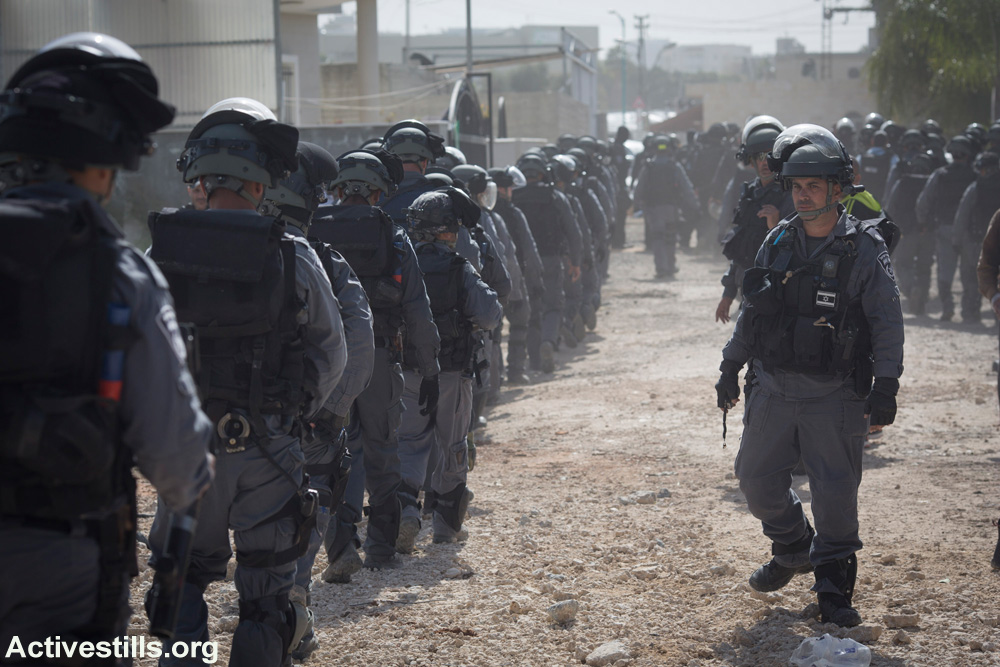 Israeli riot police march toward the site of a slated home demolition in Lyd, March 10, 2015. (Activestills.org)

They also barely hear of violent crime happening in the city, which until now mostly affected its Palestinian community, while police did nothing as long as Arabs were killing each other. In other words, they don’t understand that the city that “rioted” — as the media falsely described the recent uprising, and which was met with state violence — had never experienced coexistence, simply because one side is constantly struggling to exist.

Binational cities, officially called “mixed cities” by the establishment, are often portrayed as an oasis of coexistence. In the eyes of the Israeli mainstream, cities like Acre and Jaffa — where Israelis go to do their shopping and eat hummus at Arab restaurants — might sound like a paradise where Jews and Arabs live happily ever after. 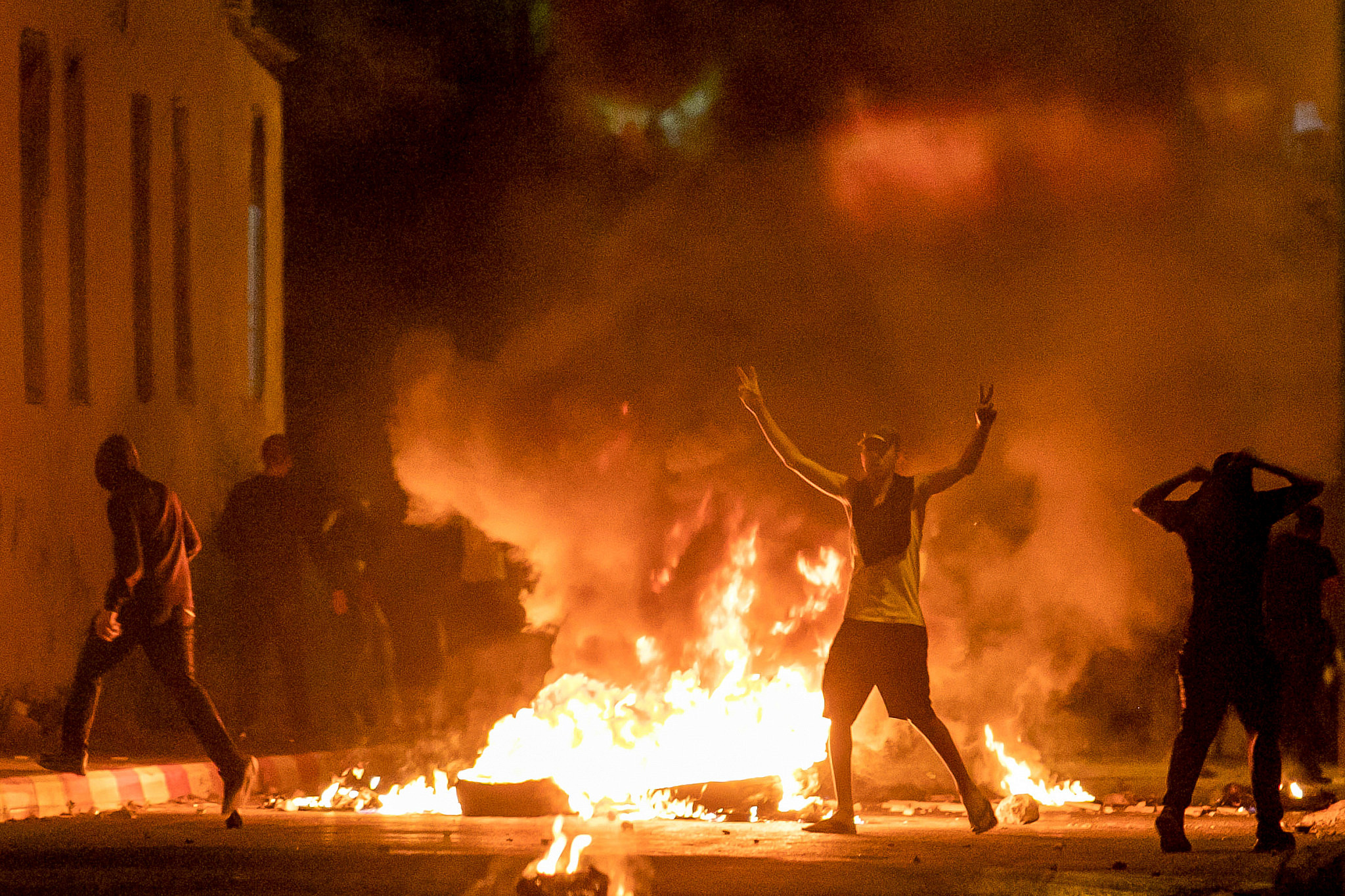 Palestinian protesters confront Israeli police forces in the city of Ramla in central Israel in response to the violence Jerusalem, May 10, 2021. (Yossi Aloni/Flash90)

Israeli government, police, the media, and most of the Israeli public — especially its Jewish supremacists — have all colluded against Palestinians, whether in Gaza, Jerusalem, Lyd, or Haifa. How disconnected can one be to not understand how frightened the Palestinians in Lyd were to go to bed every night in fear that Jewish ultranationalists would burn their homes down? How ignorant can one be, if one doesn’t ask themselves why all Palestinian youth, from the river to the sea, decided to unite by going on a historic strike and taking to the streets, demanding their freedom and dignity back?

These are frightening days, no doubt. And yet I remain optimistic. The unity shown by Palestine’s young people — this current wave of protests was led by teenagers and people in their early 20s — has managed to surprise both Israel and its subcontractor, the Palestinian Authority.

Palestinians know Israel is not a democracy, but rather a colonial entity that keeps them under its boot. They know it, even if plenty are afraid to explicitly say it, because they feel and live it. Israeli Jews, although they live on the same land, live a completely different experience. They buy this idea of “the only democracy in the Middle East” because it suits them and helps them sleep at night. They have no real reason to question this. 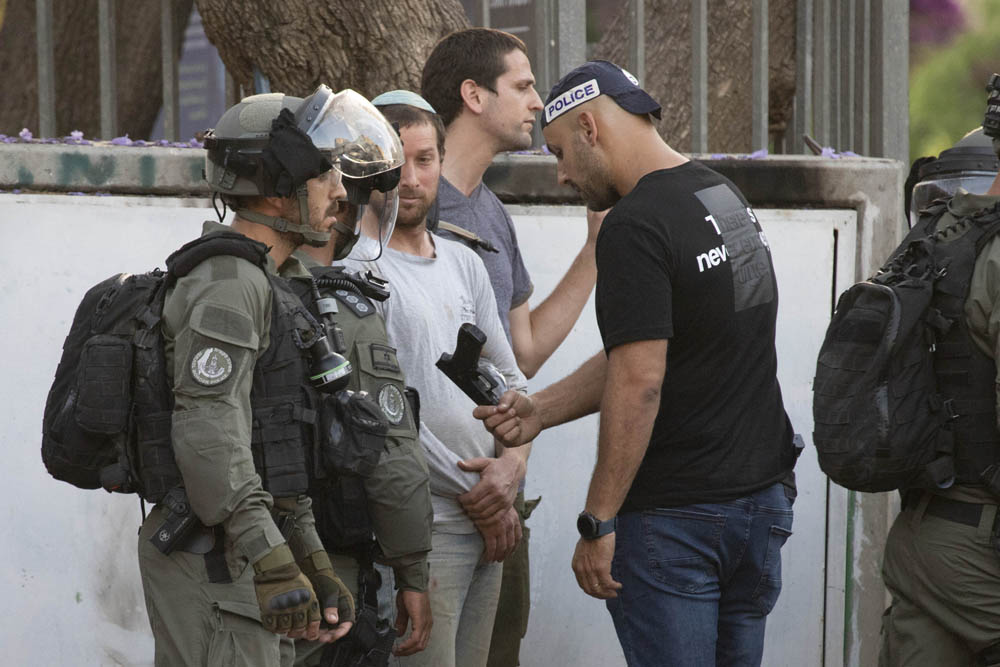 Israeli right wingers and settler seen talking with police officers during violent confrontations in the city of Lyd. The rightists were seen actively working with security forces to attack Palestinian residents. (Oren Ziv)

That is, until we, the Palestinian citizens of the state, came and put a mirror to their faces. Instead of mourning a delusion, Israeli Jews should take the time to actually listen and learn from us what real coexistence could look like: one that is based on knowing the other side’s history, narrative, and reality, while respecting their demand to live in dignity. A coexistence where the relationship between the two nationalities is not one of master and slave, but rather anchored in equality and freedom.

The chances of that happening are not very high. That’s why the Palestinian youth will keep their uprising alive. Maybe not tomorrow and maybe not next week, but I guarantee they won’t stay silent anymore. Palestine’s next generation has awoken, and it won’t stop until it gets its freedom and dignity back. For them, this wave of protest is the first step toward achieving that. 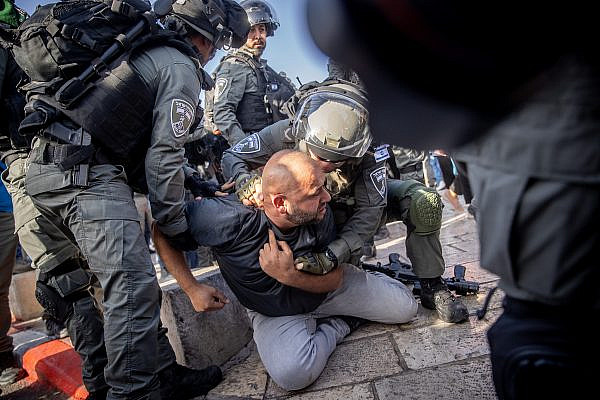 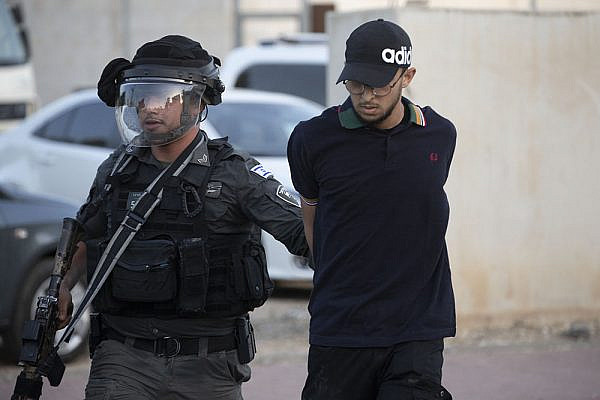