In leaked emails the former secretary of state acknowledges Israel’s nuclear arsenal, which he is pointed at Tehran. 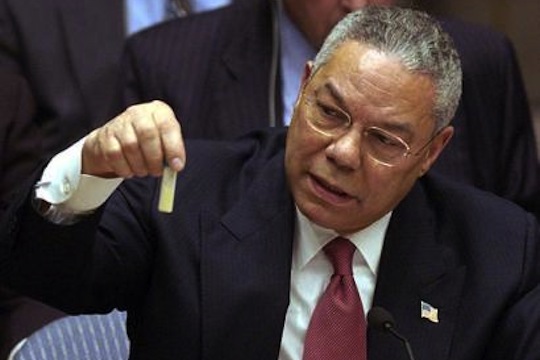 Colin Powell holding a model vial of anthrax while giving a presentation to the United Nations Security Council in February 2003.

According to hacked emails reviewed by foreign policy website LobeLog, former Secretary of State Colin Powell acknowledged Israel’s nuclear arsenal, an open secret that U.S. and Israeli politicians typically refuse to acknowledge as part of Israel’s strategy of “nuclear ambiguity.” Powell also rejected assessments that Iran, at the time, was “a year away” from a nuclear weapon.

Powell responded that U.S. negotiators can’t get everything they want from a deal. But echoing a point that many Iran hawks have questioned, Powell said that Israel’s nuclear arsenal and rational self-interest make the construction and testing of an Iranian nuclear weapon a highly unlikely policy choice for Iran’s leaders. Leeds summarizes Netanyahu as having “said all the right things about the president and all the things he has done to help Israel. But basically [he] said this deal sucks, and the implication is that you have to be an idiot not to see it.”

Negotiators can’t get what he wants. Anyway, Iranians can’t use one if they finally make one. The boys in Tehran know Israel has 200, all targeted on Tehran, and we have thousands. As Akmdinijad (sic) [said], “What would we do with one, polish it?” I have spoken publicly about both nK and Iran. We’ll blow up the only thing they care about—regime survival. Where, how would they even test one?

Israel, which isn’t a signatory to the Nuclear Non-Proliferation Treaty, has long maintained ambiguity about the size, and even the existence, of its nuclear weapons program.

Later in the email chain, Powell acknowledged Iran’s right to enrich uranium for nuclear power, said that sanctions alone wouldn’t be enough to “break” Iran, and pointed out that the assessment that Iran could make a dash for the bomb and construct a nuclear weapon within a year was exaggerated.

They say, correctly, that they have every right to enrich for energy. Russians helped build a power reactor at Busher. Can’t get enough sanctions to break them. Lots of bs around about their progress. Bibi likes to say “a year away,” as do our intel guys. They say it every years. I ain’t that easy to do.

Powell ultimately supported the nuclear agreement reached by the Obama administration, telling Meet The Press that “It’s a pretty good deal,” on September 6, 2015. In the lead up to his endorsement, Powell had harsh words for foreign policy experts who stayed on the sidelines or opposed the deal.

On August 30, 2015, Powell wrote to Ken Duberstein, President Ronald Reagan’s former chief of staff, who suggested that Powell might refrain from endorsing the deal in a television interview where he would face questions about Hillary Clinton’s emails.

Powell said he could handle the political questions, defended the deal to Duberstein as a “good one for the country,” and blasted Council on Foreign Relations President Richard Haass and Ret. Gen. David Petraeus for publicly remaining undecided about the agreement. Powell told Duberstein:

The Iran deal is a good one for the country and our alliances. Retired generals and admirals popping off. I have studied it pretty thoroughly…I have done emails before on tv. Have to deal with ISIS. Richard] Haass, Petraeus et all claiming to be undecided. BS, they are just protecting their future options. I don’t have or want any. Baker, Shultz know what’s right, as does Henry. Brent showed some guts.

But even Duberstein, who had urged Powell to avoid a high-profile endorsement of the deal and hasn’t publicly spoken about the deal, couldn’t resist sharing with Powell his assessment of former George W. Bush administration ambassador to the United Nations John Bolton’s fundraising email, which described the nuclear deal as “the single largest global security crisis.”

Duberstein forwarded the email to Powell, adding a succinct message at the top: “Haha! What is he smoking?”