Israeli democracy is being severely compromised by the army’s collaboration with the settlers, and the fact that more and more Israeli citizens now see the occupation as the natural order of things. 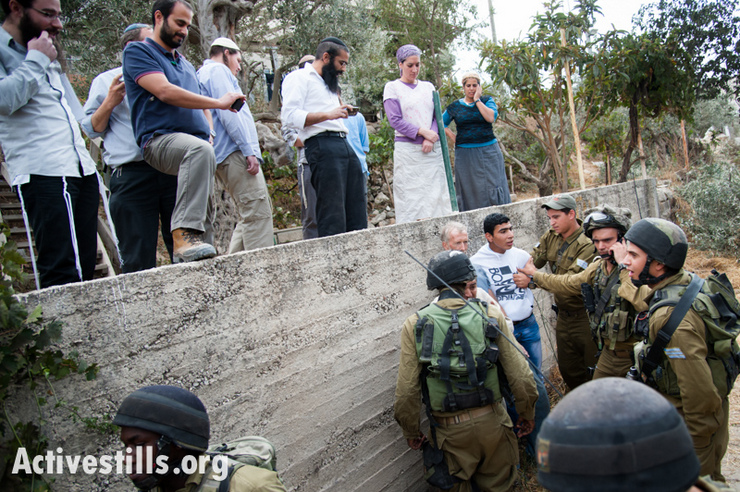 With Israelis from Tel Rumeida settlement looking on from above, Israeli soldiers arrest two Palestinians and an international volunteer after confrontations between settlers, the Al Azzeh family who had just harvested their olives, and the military, October 22, 2012. (photo: Activestills)

The following complaint was received from M., a resident of a village near Qalqiliya:

“Last night, at about 7:30 p.m., we were all in the house. Suddenly I heard a noise outside, including the engine sound of a military vehicle. We didn’t leave the house and I looked through the window. I saw a military jeep parked west of the house, some 150 meters down the road towards the town center. I also saw a large group of settlers moving on the road bordering my house. A military jeep was driving before the mass of settlers, with another jeep behind them. The sun had already set, but I could see what was going outside because there is a lamppost outside my house. The lights of the jeeps were on, and some of the settlers were carrying flashlights. Suddenly we heard stones hitting the house, the greenhouse and the courtyard. Luckily, all the windows of the house are covered, so no stones went in.

“The soldiers remained inside their jeeps during the entire event. The stoning went on for about 10 minutes. When the settlers passed the house, I think there were some 200 men and women there, they shouted “Dirty Arabs,” “Go to Saudi Arabia”, “Death to Arabs.” The settlers went on marching towards the center of the town, then there was quiet. Later, some of the settlers came back and stood next to my water cistern.

“I immediately called the town hall and other residents to inform them of what was going on. Nobody came to help us but we were told that in the center of the town there were four more army jeeps which were using tear gas to prevent any attempt of gathering on the part of the villagers who might have tried to repel the settlers.

“I think this was an intimidation and harassment act by the settlers, in coordination with the army. True, no physical damage was caused to the house or greenhouses, but my wife and daughter are still very scared. I registered a complaint with the Palestinian District Coordination Office.”

What we see here, as in far too many cases, is violence on the part of the settlers, while the IDF – which is supposed to defend the residents from the settlers – stands aside. This behavior by the IDF, which cannot be termed as anything but collaboration with the rioters, has a very long history. One of the earlier cases is the “Night of the Bottles,” in which settlers led by prominent settler leader Daniella Weiss stormed Qalqiliya and broke bottles on the walls of the houses. The soldiers at the scene didn’t do anything, though the officer present would later call the event a “pogrom.” Nobody asked him why, when facing a pogrom, he did absolutely nothing. Unfortunately for Weiss, the incident was recorded and she was actually convicted. However, given the tradition of our courts of being merciful toward hooligan settlers, she managed to get away with a fine and a suspended sentence.

In extreme cases, the collaboration between the army and the settlers is even tighter. After the murder of the Fogel family in Itamar, the army went on a rampage in the village of Awarta, with soldiers causing deliberate damage to food and property – but this wasn’t enough for the soldiers. Settlers reported (Hebrew) that soldiers allowed them to move through the roadblocks so they could reach the village and cause some more damage. In one case, it was claimed, a soldier gave a nightstick to a settler and asked him to use it in his stead.

The IDF insists on claiming it does not “choose its missions,” hence it is supposed to be above political conflict. However, in the last 30 years, the main mission of the IDF has been operating the occupation, and it is increasingly becoming a private-settler militia. This, by the way, would be true even if the settlers described in the complaint behaved impeccably: they come and go with military escorts, soldiers whose service is increasingly dedicated to providing security details to civilians who have willingly chosen to live in an area held under wartime conditions.

This has severe implications both for the IDF – militias are not all that good facing regular armies – and on Israeli democracy. The feeling is that events such as the one detailed above, which used to receive plenty of attention from the media, no longer do so. More and more, the citizens of Israel are getting accustomed to the occupation as the natural order of things; and when something is seen as normal, as normal as paying your taxes every month, it is that much harder to reverse.