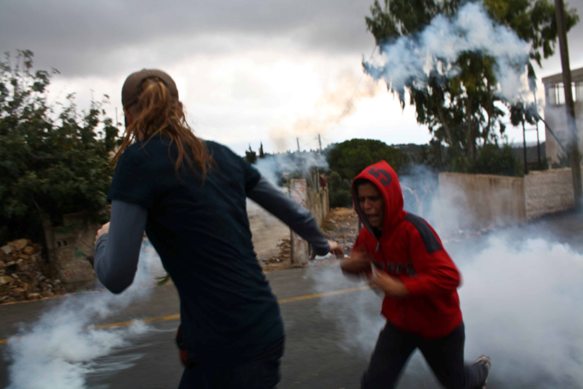 For the second time this week, soldiers raided the village of Nabi Saleh. From the hours of 12:00 until 03:00 last night, soldiers raided eighteen houses in the village of Nabi Saleh. Soldiers, in full combat equipment, raided the houses in order to photograph people, mostly young men, and check ID cards. No arrests were made. However, the intentions of the army are clear.

The pattern has been used many times in the past. The army raids a house in the middle of the night. Soldiers take a photograph of a 15 or 16 year-old child and match the photograph with ID information. Then, some days later, during the weekly nonviolent demonstration, soldiers go from house to house with a picture book of people and arrest them. It does not matter if the suspected person is in the middle of the demonstration or inside the house watching television.

Once soldiers apprehend the suspect, they create a story that the person was throwing stones or ‘rioting.’ This story is usually based on zero evidence and it does not have to be in order to be used in an Israeli military court. The only thing necessary is for a soldier to say that he saw the person throwing stones. No photographic or video evidence is needed. Not even another witness.

Last night’s raid was the second time this week for Nabi Saleh. Bassam Tamimi, one of the Popular Committee leaders of Nabi Saleh, said that the army has raided almost every house in the village this week. Every male between the ages of 12 and 22 has been photographed by the army and their ID numbers have been taken.

Nabi Saleh, a small village west of Ramallah, has engaged in unarmed demonstrations against the confiscation of their land by the neighboring Jewish settlement of Halamish for the past year. There have been countless injuries, arrests and collective punishment against the village over the past year as the army has tried to crush the protest. This Friday afternoon, Nabi Saleh will once again march to its land and demand an end to the Israeli occupation.

These night raids are used throughout the West Bank against villages that are engaged in unarmed resistance to Israel’s occupation and separation barrier. When the media cameras and activists are not around, Israeli soldiers harass villagers in a form of collective punishment. The youth of these villages are wanted men (actually, children) in the eyes of the Israeli government and many end up in Israeli jails.

Attacking children and youth is one of the most perverse forms of collective punishment. I can’t help but think of an example of punishment targeting children from Jewish history. In the fifteenth century, King Manuel of Portugal ordered the first born child of almost two thousand Jewish families be banished to the remote island of São Tomé in order to collectively punish the Jews for not converting to Christianity upon their arrival to Portugal from Spain. Eventually, Portugal forcibly converted its Jewish population, but over 2,000 children were banished to the island. While Israel is merely banishing Palestinian children from Nabi Saleh to remote prisons, the method of punishment is similar. Is it reckless to think of an a forgotten episode in Jewish history while watching the occupation of Palestinians? My feeling is no.

Raiding West Bank villages, photographing youth and then arresting them days later is a sick form of Israeli control over the Palestinian population. These children end up in jail for months on bogus charges which could not stand up in any court of law that is interested in justice. If one wants to see the true cost of engaging in nonviolent and unarmed resistance to Israel’s occupation, look at the children that are siting in Israeli jails. The Portuguese banished Jewish children to a remote island, Israel banishes Palestinian children to remote concrete jails.